Materials including sections of the Tappan Zee Bridge get deployed into the waters off of Hampton Bays on May 31. Credit: Randee Daddona

Finally, the welcome sign has been turned on for barnacles, the scourge of boaters.

Concrete and steel from the Tappan Zee Bridge were sunk 2.4 nautical miles south of the Moriches Inlet on Saturday, officials said, creating a 14-acre home for the miniature crustaceans that all too often have to be scraped off hulls.

The New York State Department of Environmental Conservation says that expanding Long Island's artificial reefs with recycled debris from canal vessels and the old Hudson River bridge will increase all manner of marine life, along with recreational and commercial fishing.

"Once materials settle to the sea floor, larger fish like blackfish, black sea bass, cod, and summer flounder, move in to utilize the habitat, and encrusting organisms such as barnacles, sponges, anemones, corals, and mussels cling to and cover the material," it said in a statement. 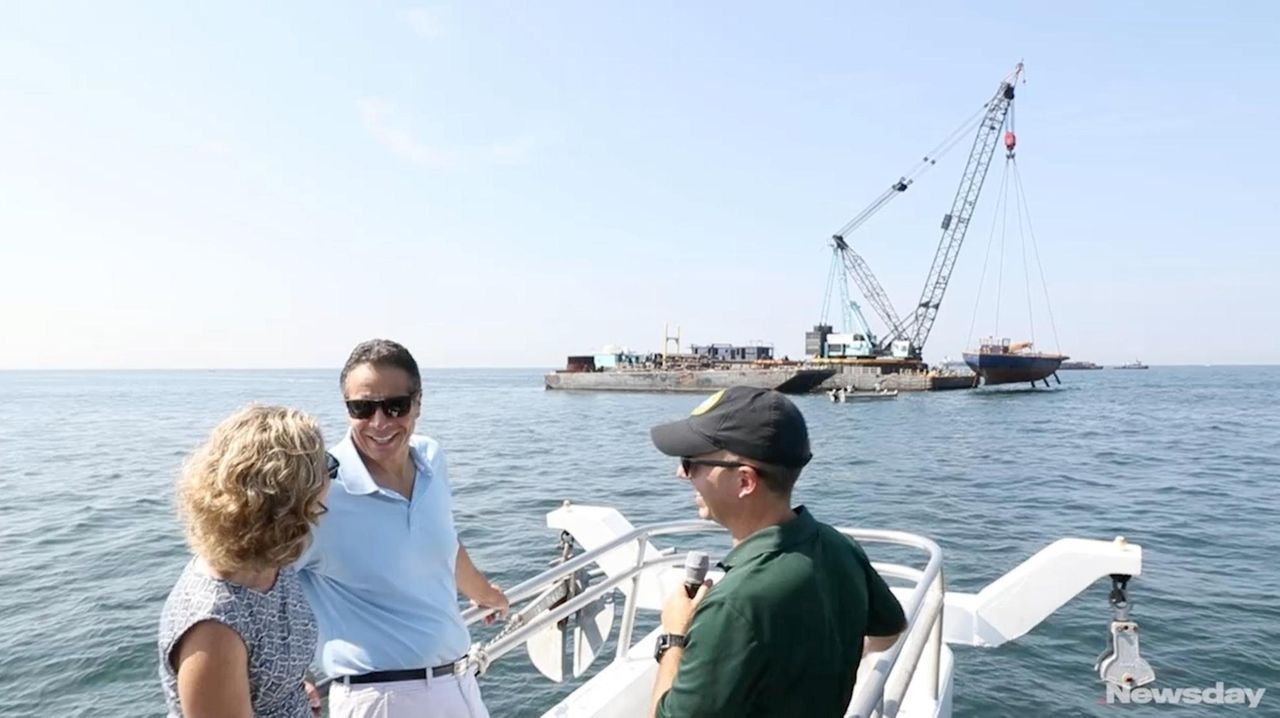 Long Island's artificial reefs date back to 1949. In May, Gov. Andrew M. Cuomo directed that cleaned construction material first be placed at Shinnecock Reef, followed by the Smithtown and Rockaway reefs in July. Earlier this month, the Hempstead Reef was built out. Fire Island Reef also is on this summer's schedule. Six more reefs are planned for next year, Cuomo has said.

"Over time, these recycled structures will become habitat similar to a natural reef," the DEC said.

DEC Commissioner Seggos said, "This innovative initiative benefits fish and fishermen and women alike, recognizing that our environment and economy can both thrive and work together toward a common goal.”

Cuomo visits LI site for artificial reefGov. Andrew M. Cuomo traveled to Shinnecock Inlet to witness work for the construction of an artificial reef off the coast of Hampton Bays. Pipes, boats dropped in Sound to expand reefExpanding the reef is part of a $5 million state program to boost improve underwater habitats and boost sport fishing, diving industries. NY to spend $5M to expand artificial reefs off LINew York State will spend $5 million transporting material from the demolished Tappan Zee Bridge ... Cuomo to announce artificial reef expansion Nearly 50,000 cubic yards of material from the demolished Tappan Zee Bridge as well as decommissioned vessels are to be submerged in waters around Long Island.