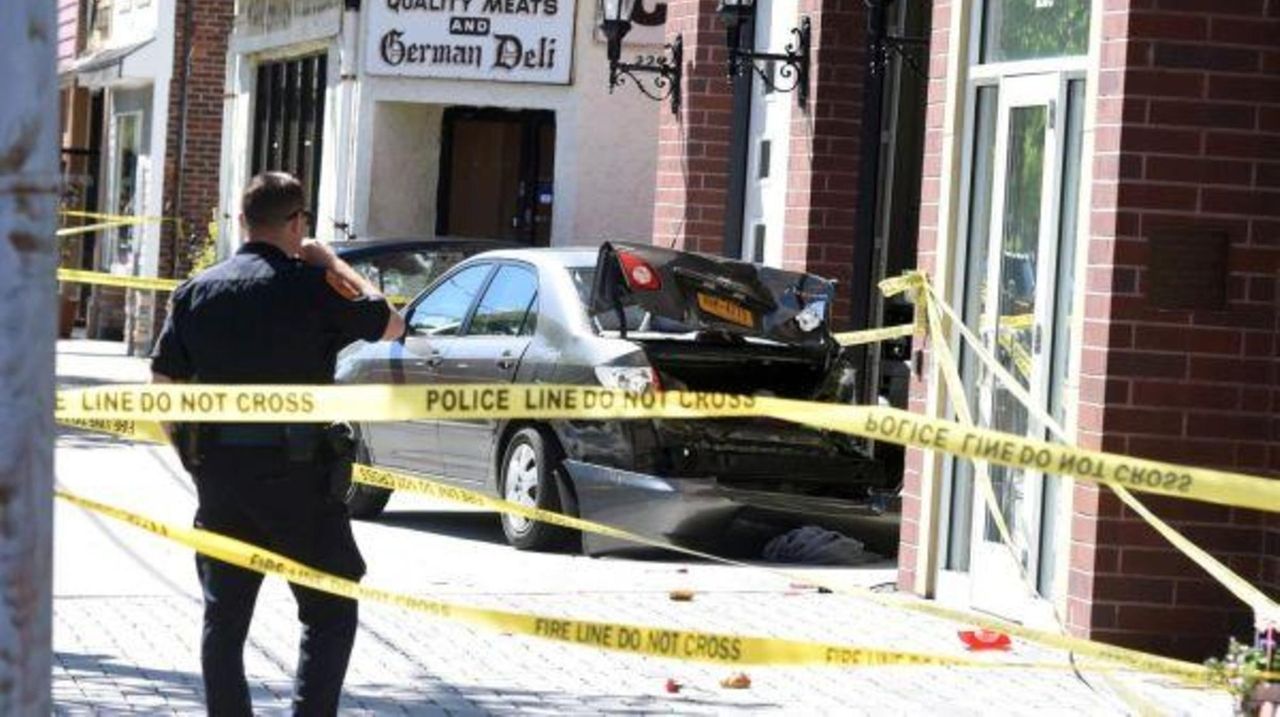 A woman was killed when she was struck by a car on a Lindenhurst sidewalk Sunday morning, May 14, 2017, but saved her teenage daughter by pushing her out of the way at the last moment, Suffolk County police said. Credit: James Carbone, Johnny Milano

On the day set aside to honor mothers, a Lindenhurst woman gave her own life to save her daughter’s Sunday morning when she was hit by an out-of-control car just after pushing the teenager from the path of the vehicle, Suffolk police said.

“I have no doubt that she saved her daughter’s life,” Det. Sgt. James Murphy said of Diane Aluska, 55, who was later pronounced dead at Good Samaritan Hospital Medical Center in West Islip.

Because of Aluska’s actions, her daughter, Jenna, 16, was only clipped by the 2005 Toyota Corolla, police said.

Police said just after 9 a.m. the mother and daughter were walking on a Lindenhurst sidewalk in front of 225 S. Wellwood Ave. when the car hit them.

The driver, Ann Riolo, 80, also of Lindenhurst, had put the car in reverse and was backing out of a diagonal parking spot on the south side of South Wellwood Avenue when she “drove onto the sidewalk,” police said.

The car then crashed into the Lindenhurst Fire Department, police said.

Diane Aluska was pinned under the car until bystanders rushed to the scene and pushed the Corolla off her, police said. They administered CPR until first responders arrived.

Jenna Aluska and Riolo were both treated for minor injuries at Good Samaritan, police said. There was no criminality involved, said Murphy, of the First Precinct.

A woman at the hospital who identified herself as a spokeswoman for the Aluska family declined to comment.

In addition to her daughter, Diane Aluska also had a son expected to leave for college in September, said Jim Conrad, 66, a neighbor of the Aluskas.

“I’m in shock,” Conrad said. “We talked Friday about her kids going to college and now she is gone. . . . I feel so bad for them. Now, [Jenna Aluska’s father] has to raise those kids alone.”

Lindenhurst Mayor Michael A. Lavorata said the accident was particularly sad because of the timing.

“Anytime anyone is killed in an accident, it’s a tragedy, but on Mother’s Day it compounds this tragedy.”

A woman who answered the phone at Riolo’s home and identified herself as the driver’s daughter would not comment on the crash.

Patricia Riccuiti, who lives next door to Riolo, said her neighbor is a “very nice woman” who lives with her husband and grandson.

“She’s lived here many years and she drives herself to and from work every day,” Riccuiti said of Riolo. “As far as I know, she’s a very cautious driver. I’ve ridden with her.”

The pastor of nearby Our Lady of Perpetual Help R.C. Church, Msgr. Joseph DeGrocco, said he heard the crash and was told a woman who had been struck had attended the 8 a.m. Mass.

Victoria Fisher-Kelly, owner of Linden Florist, said she and several others called police when they heard the crash.

“It was horrific and something we’ll never forget,” she said, hours later.

The business owner, whose store is adjacent to the firehouse, said several parishioners from the church aided the woman, covering her with blankets until authorities arrived at the scene.

“It’s heartbreaking,” said Cherisse Edwards, who was heading into the church.

Janet Lake, 68, of Lindenhurst, said she came upon the crash scene Sunday morning as she walked to a nearby bank.

“It’s tragic and sad that someone had to die,” Lake said. “It could’ve been me.”

The Corolla was impounded for a safety check and the investigation is continuing.

This story was reported by Lisa Irizarry, Deon J. Hampton, Michael O’Keeffe and Valerie Bauman. It was written by Bauman.