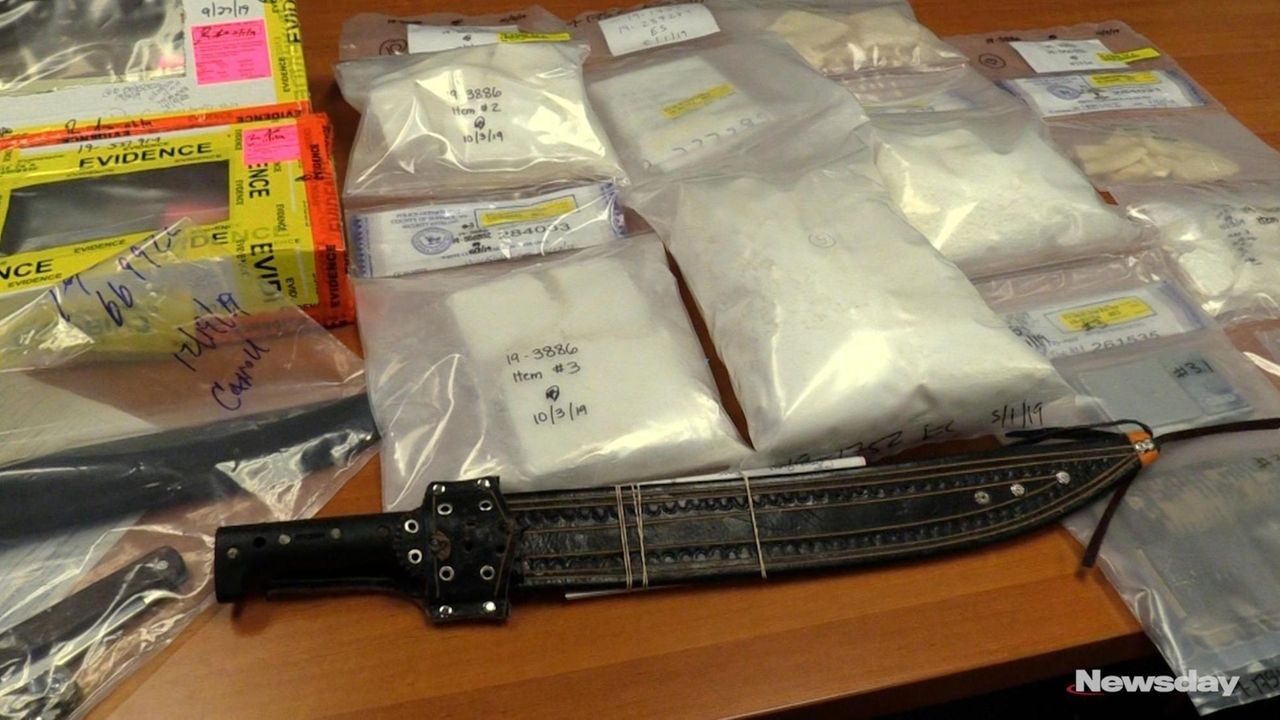 Suffolk County District Attorney Timothy Sini spoke at a press conference on Friday about nearly 100 MS-13 members and associates, including the leaders of nine area cliques, who have been charged in the largest state takedown of the dangerous street gang, which has terrorized parts of Long Island for years.    Credit: James Carbone

Nearly 100 MS-13 members and associates, including the leaders of nine local cliques, have been charged in the largest state takedown of the dangerous street gang that terrorized parts of Long Island for years, Suffolk officials announced Friday.

The 23-month investigation thwarted seven murder plots and dismantled the so-called "New York Program," which was launched by the gang's El Salvadoran-based leadership to develop a foothold on Long Island, officials said Friday at news conference in Riverhead. But officials also acknowledged the gang is not eradicated and the investigation must continue.

Long Island has been a center of MS-13 crime since 2016, with at least 30 suspected murders attributed to a gang known for acts of raw violence involving guns and machetes. The bloodshed has led to dozens of arrests and attracted the attention of President Donald Trump, who twice visited the region to address the gang violence.

"MS-13 is a savage, ruthless gang which commits acts of violence to recruit, retain and control its members, exact revenge on its rivals as well as to extort innocent members of our community," said Suffolk District Attorney Timothy Sini. "They engage in various acts of criminality to generate money, including drug-dealing, and they send portions of that money to the leadership in their home base of El Salvador."

Last month, the Suffolk District Attorney's Office convened a special grand jury that issued an indictment against 45 MS-13 gang members — including the leaders of nine cliques operating in Huntington, Brentwood, Central Islip and Queens — and 19 of the gang's drug suppliers. Six of those suspects were charged with operating as a major trafficker, a felony that carries a maximum sentence of 25 years to life in prison.

Dozens of other members of the transnational criminal organization were charged by Suffolk law enforcement in the preceding weeks and months, while the investigation has netted more than 130 other arrests across the nation, including Texas, Washington, D.C., Virginia and Maryland, officials said.

"MS-13 has terrorized Long Island communities for too long, murdering innocent New Yorkers and instilling fear in countless others," Gov. Andrew M. Cuomo said in a statement. "Thanks to the great work of Suffolk County DA Sini, law enforcement and our targeted programs to keep young people from joining gangs, MS-13's power is diminishing."

The indictment identified 77 counts, including conspiracy to commit murder; first-degree assault; gang assault; firearms sales and possession; operating as a major trafficker; criminal sale of a controlled substance; and drug possession. Many of the suspects were arraigned this week in Riverhead and held without bail, Sini said.

"This investigation sends a very clear message to the leadership of MS-13 that New York is not your home and it will never be your home," said Ray Donovan, special agent in charge of the DEA for New York.

The 96 individuals — 66 gang members and 30 drug distributors — range in age from 16 to 59 and include legal U.S. citizens, immigrants in the country illegally and those with varying degrees of legal immigration status, Sini said.

“MS-13 gang members act with depravity and no regard for the victims that they prey upon," said Hart, who spent more than 20 years with the FBI and was the previous head of the Long Island Gang Task Force. "Their violence has no bounds, which is why investigations like this one are so critical.”

Mara Salvatrucha, commonly known as MS-13, has more than 50,000 members in Central America and another 8,000 to 10,000 members in the United States and Europe, Donovan said. At a forum in Bethpage last year, acting Assistant Attorney General John Cronan put the number of MS-13 gang members operating on Long Island at roughly 2,000, but other law enforcement leaders have offered significantly lower estimates.

Gang members have been charged with executing four young men in the woods behind a Central Islip soccer field and in connection with the violent deaths of a pair of high school students from Brentwood: Kayla Cuevas, 16, and Nisa Mickens, 15.

The violence captured the attention of Trump and his then-attorney general, Jeff Sessions. In a July 2017 visit to Brentwood, Trump said MS-13 had transformed communities across the country and throughout Long Island into “bloodstained killing fields.”

The investigation, Sini said, was launched in 2017 through a tip from the Nassau County District Attorney's Office that helped identify Noe Fuentes, also known as "Ghost," the head of Huntington Criminales Los Salvatrucha, the clique with the highest number of identified MS-13 gang members on Long Island.

Fuentes was the regional coordinator of the New York Program — tasked with expanding the group's presence throughout the state and collecting proceeds from the sale of drugs and weapons, the indictment states. Fuentes would send the cash back to El Salvador so the group's leadership could purchase more weapons, ammunition and narcotics, records show.

But the gang quickly reconstituted its leadership under the Park View clique in Brentwood, led by David Rodriguez, also known as "Dario," according to the indictment.

The task force, expanding the scope of its investigation, then obtained a wiretap on 215 phone numbers — making it one of the largest wiretap investigations of a gang operating in the United States, Sini said.

In total, law enforcement officials arrested the leaders of nine MS-13 cliques, "decimating" groups based in Brentwood, Central Islip and Jamaica, Queens, Sini said. Each of the local cliques, Sini said, has an affiliate group of the same name based in El Salvador.

The clique leaders oversaw the gang's daily activities, including sanctioning violence, selling drugs and collecting dues from lower-level members, according to the indictment.

In addition to Fuentes and Rodriguez, the indictment identified five leaders of MS-13 cliques:

The suspect's attorneys could not be reached for comment.

“We obviously deny everything,” Joya said Friday night. “We’ve pleaded not guilty and we plan to fight these charges and have our own investigation.”

The indictment did not include the names of the other two clique leaders.

Investigators said they recovered a treasure trove of evidence against the gang — some of which was on display at the news conference.

It included more than 10 kilos of cocaine; about 1,000 fentanyl pills; large amounts of heroin, crack and marijuana; drug ledgers; nine handguns; a pair of long guns; more than 500 rounds of ammunition; gun parts; machetes; and more than $200,000 in cash.

"MS-13 terrorized and controlled our neighborhoods through their use of criminal activities such as murder, rape, assault, extortion, money laundering, prostitution, gun trafficking and weapons trafficking," said Peter Fitzhugh, special agent in charge for Homeland Security Investigations. "Their signature weapon is the machete, used frequently against rivals to demonstrate their ruthlessness and inflict fear into the communities they sought to infiltrate."

For example, officials obtained a 20-point set of rules and regulations for the Huntington-based clique. One of the rules stipulated that to move up the ranks in the gang, an individual must commit at least four murders. To jump to the next level, a member must kill two more times. But a later regulation says the clique will accept "zero violence" from its members.

"This is a total contradiction," Donovan said. "The reality is MS-13 has no rules. Their rules are violence, fear and control of their territory."

Despite the massive takedown, Sini said MS-13 on Long Island is not yet eradicated. The gang, he said, will regroup, with leadership in El Salvador sending new leaders to Suffolk to take the place of those who were arrested.

"Was this a major blow against MS-13 in the region? Absolutely," Sini said. "Is the battle over? Absolutely not. And what you're hearing from us today is we are more committed than ever to work together to eradicate this gang."

MS-13 takedown by the numbers