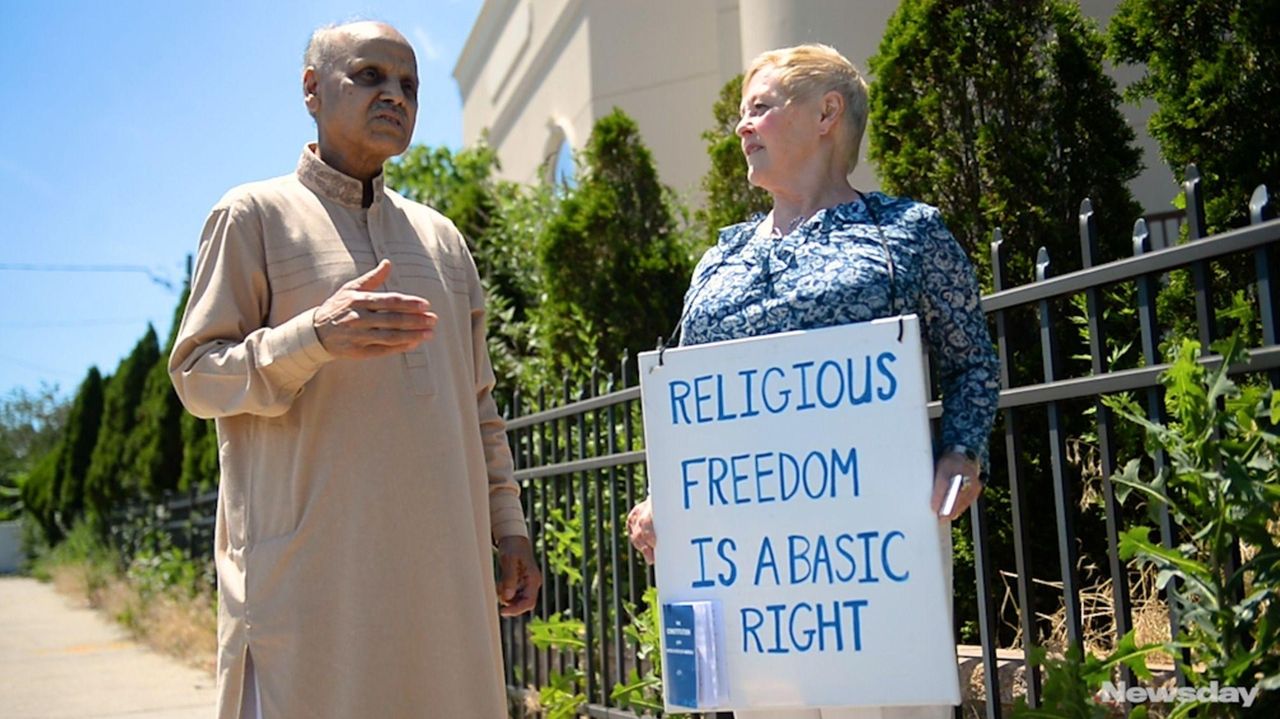 On Sunday, June 25, 2017, Ruth Cohen and a few others stood outside of the Islamic Association of Long Island in Selden advocating for the rights of the Muslims praying inside. Cohen said she started the silent vigils after the last presidential election.  Credit: Steve Pfost / Steve Pfost

Dozens of Long Islanders gathered outside a Selden mosque Sunday to express solidarity with Muslim residents celebrating Eid al-Fitr, an important holiday in the Islamic faith.

A group of residents have been attending these events, which they call silent vigils, on the last Sunday of the month ever since President Donald Trump was elected.

Organizer Ruth Cohen, 78, of Lake Grove, said that showing solidarity with community members shouldn’t be a one-time occurrence, and promised that she would continue with the monthly vigils outside the mosque, the Islamic Association of Long Island, until she saw lasting change and a shift in the national dialogue.

“We are showing solidarity with everybody, not just Muslims,” Cohen said. “We have to get to the point where people will say ‘enough.’ ”

Marjorie Kandel, of Port Jefferson Station, held a sign with a message printed in bold letters: “We are all Americans.”

“That’s it. It’s not just some people,” said Kandel, 72, adding that she had attended about four of the monthly vigils and pledged to continue.

Members of the mosque said they were grateful for the community’s support in a tense climate characterized by Trump’s proposed revised travel ban of six Muslim-majority countries and hate crimes across the country.

“It’s not constitutional what’s going on in this country,” said Mohammad Akhtar, the mosque’s president. “We are being isolated as Muslims.”

The vigil coincided with the end of Ramadan, a holy month for Muslims, and the beginning of the three-day Eid al-Fitr festival. The mosque hosted three prayer sessions Sunday, with a total of about 3,000 attendees, Akhtar said.

An estimated 80,000 Muslims live on Long Island. In the United States, about 1 percent of the population is Muslim, according to the Pew Research Center, a nonpartisan research group in Washington, D.C.

Tehmina Tirmizi, 41, of Farmingville, said that the mosque’s members have growing concerns in the wake of terrorist attacks in the country and abroad.

“Nobody should live in fear. Should we go out? Should we wear a headscarf?” Tirmizi said. “These aren’t fears we should have.”

She said that Selden’s Muslim community feels lucky for the outpouring of continuing community support.

“It’s beautiful. It solidifies what this country stands for,” Tirmizi said. “It gives us peace of mind. We know that someone has our back.”