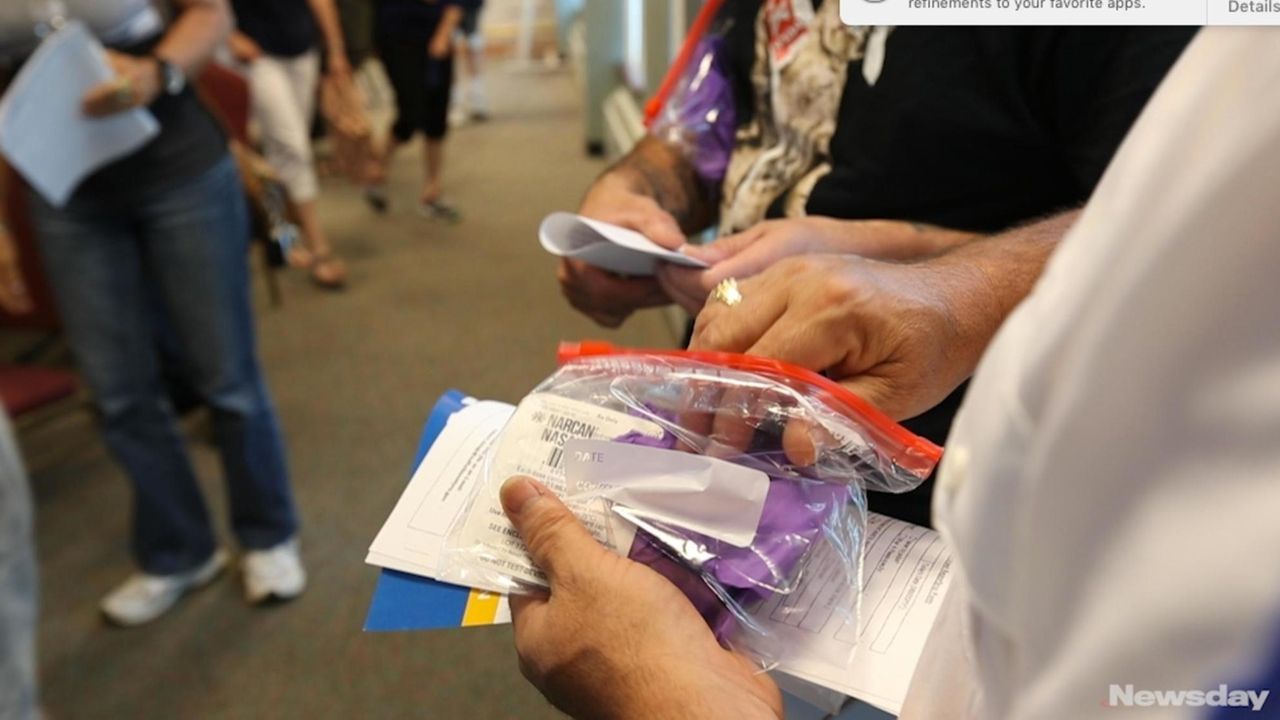 Suffolk County held a naloxone training class Saturday afternoon at the Huntington Community First Aid Squad building in Huntington Station. Dr. Gregson Pigott, clinical director of the county's Department of Health Services’ trained overdose responder program, talked to participants about the importance of the training and how it can help save lives. Credit: Newsday / Michael Owens

When Jeffrey Turner signed up to learn how to administer the lifesaving anti-opioid overdose drug naloxone, he was expecting to practice on a dummy.

But there was no dummy. In fact, at a class Saturday, the only real instruction was a few sentences from a doctor.

“That’s totally easy. Wow,” the Deer Park resident said. “I thought there was a needle involved.”

His wife Jeanmarie added: “If you’ve given a nasal spray to yourself, you know how to do this.”

The Turners were among 32 people who took a naloxone training class Saturday afternoon at the Huntington Community First Aid Squad building in Huntington Station.

Many were emergency medical technicians. Others were like the Turners: People who know someone addicted to opioids or know someone with a family member struggling with addiction.

Dr. Gregson Pigott, clinical director of the Suffolk County Department of Health Services’ trained overdose responder program, told participants that they simply had to press a plunger on the container of naloxone — commonly known by the brand name Narcan — and four milligrams of the medicine would spray into the nose of the person who had overdosed.

Each participant received a kit with two state-funded packages of Narcan. Two are given, Pigott said, because if the patient does not revive in three to five minutes from the first dose, a second dosage of Narcan can be squirted into the other nostril.

Pigott described the signs of an overdose — including slow or shallow breathing and a heavy head nod unresponsive to stimulation — and gave participants options for long-term drug treatment.

The Suffolk County Medical Examiner’s Office projects that the number of opioid-related deaths in the county will reach a record 429 in 2017 once tests of drug cases are completed. A top Suffolk police official, however, told county legislators Thursday that the number of overdoses — fatal and nonfatal — over the past 12 months has dropped sharply.

Suffolk County Legis. William Spencer (D-Centerport), who helped sponsor the training, recalled Saturday how in 2016 a man began overdosing outside a doughnut shop in Ronkonkoma and collapsed. Although he is a physician, all he could do was lift the man’s jaw to ensure he was breathing and wait for emergency responders to arrive with naloxone — which “revived him immediately,” Spencer said.

“I did not have Narcan,” he said. “It was terrifying….You bet I have Narcan now.”

Andres Echevarria of Amityville said he helped a family member get into treatment about a month ago after she tried to commit suicide following at least five years of opioid addiction.

Echevarria said he attended the Narcan training Saturday so he could “be there for her and for everyone else who needs it.”

“Everyone deserves a second chance in life,” he said.

For information on Narcan training in Suffolk County, visit www.suffolkcountyny.gov/Departments/CountyExecutive/SuffolkCountySubstanceAbuseResourceCenter.aspx

To sign up for Narcan training in Nassau County, visit forms.nassaucountyny.gov/agencies/CE/narcan/ontraining.php

Narcan is also available at some pharmacies. The state covers up to $40 of co-payments for the medicine. No prescription is needed. To find a participating pharmacy, go to www.health.ny.gov/overdose

Opioid overdose deaths on LIIn 2016 on Long Island at least 555 people died of drug overdoses, with fentanyl being involved in 275 deaths.