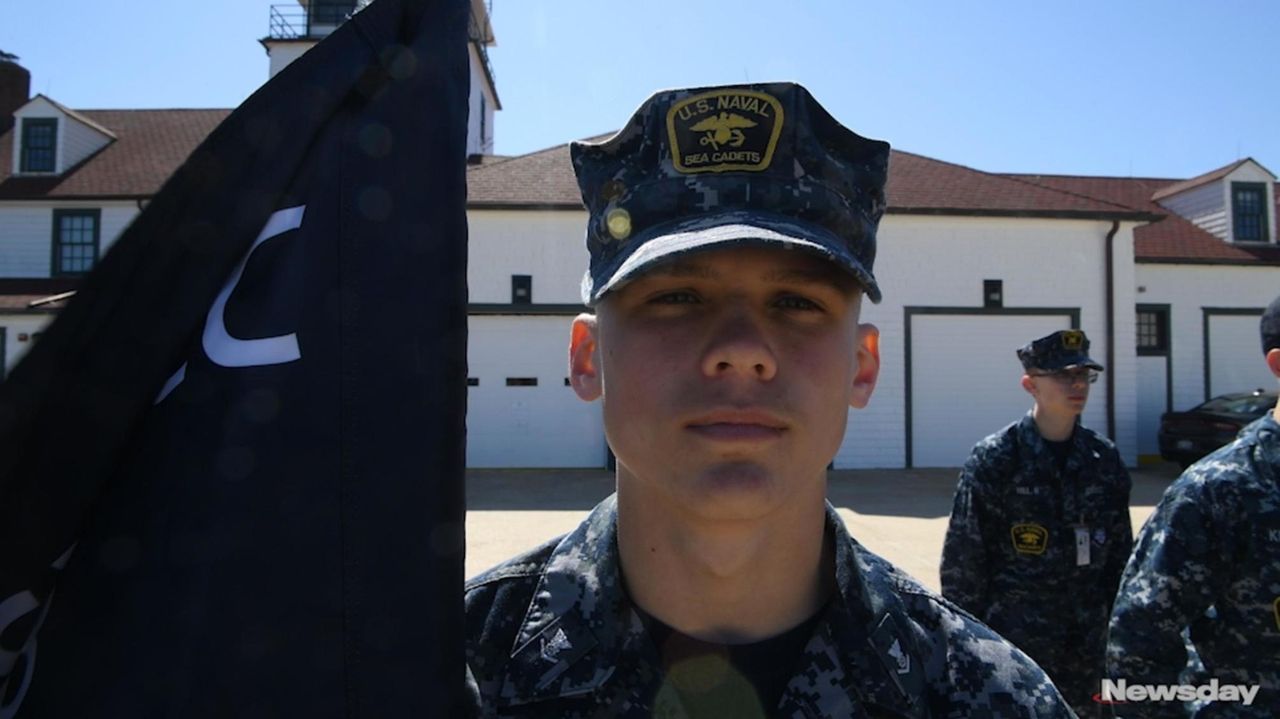 Natalie Puello knew she could be playing sports or hanging out with friends on Saturday.

But instead Puello, 15, woke early, donned her blue camouflage fatigues and reported for duty, just as she has done since she was 12. As a Naval Sea Cadet, one Saturday and Sunday a month is reserved for drill weekend.

Puello wouldn’t have it any other way.

“It took some getting used to, to come here when everyone else gets to party and do different activities, but I don’t regret it,” Puello, of Mastic, said. “It’s shaped who I am today.”

In East Moriches, Puello and about 20 of her fellow cadets gathered Saturday at the U.S. Coast Guard station for training. The East Moriches unit is one of four on Long Island.

The U.S. Naval Sea Cadet Corps serves as a kind of introduction to naval service. Volunteers teach leadership, seamanship and life skills through a military framework for teens up to age 18, said Forrest Woodward, commanding officer of the Theodore Roosevelt Division.

On Saturday, drill weekend began promptly at 8 a.m. with a uniform inspection and self-defense class. Then, it was off to the classroom, where instructors went over tips for taking the Armed Services Vocational Aptitude Battery, a mandatory test for military members that determines what career paths they might be able to take.

Participants learn about the program largely through word of mouth, and Woodward looks for teens who are willing to show commitment. It’s a big one, too, with monthly trainings and a two-week summer boot camp required.

“This is not a convenient program, you don’t get to show off a fancy uniform. These guys get up at 5 a.m. and come here on a Saturday instead of staying home and playing Xbox,” he said.

But the students who do make that commitment can build an important foundation of skills.

Puello has always known she wanted to go into the military, but wasn’t sure where, she said. The program has since increased her interest in being a naval officer and given her a jump-start on training. She is interested in the JAG Corps, the Navy’s legal arm.

“I like the leadership and dedication it takes to be in a program like this or be in the military,” said Puello, a sophomore at St. John the Baptist School in West Islip.

The Theodore Roosevelt Division in East Moriches is only about 4 years old but attracts students from across Long Island who are seeking a military career or a sense of discipline.

Ashesh Sheth of Farmingville said his son Sid, 12, isn’t yet sure if the military is for him. But Sid was interested when they learned about the Sea Cadets last year.

“I had done something similar in India when I was his age,” Sheth said. “I’m going to leave it up to him what he wants to do with his life, but I wanted to at least give him better discipline and make him a better citizen.”

As Saturday’s training wound down and the cadets prepared for the next day, John Gifford, 17, of Patchogue, reflected on what is one of his last drill weekends. He will graduate from Patchogue-Medford High School in a few weeks and leave the program.

Gifford enrolled when he was 13 and has since decided he’d like to study film and photography instead of pursuing a military career, he said. But he’s glad he stuck with the cadets each year.

“It’s given me the determination to get things done,” he said. “Once you stick with something, you finish it.”