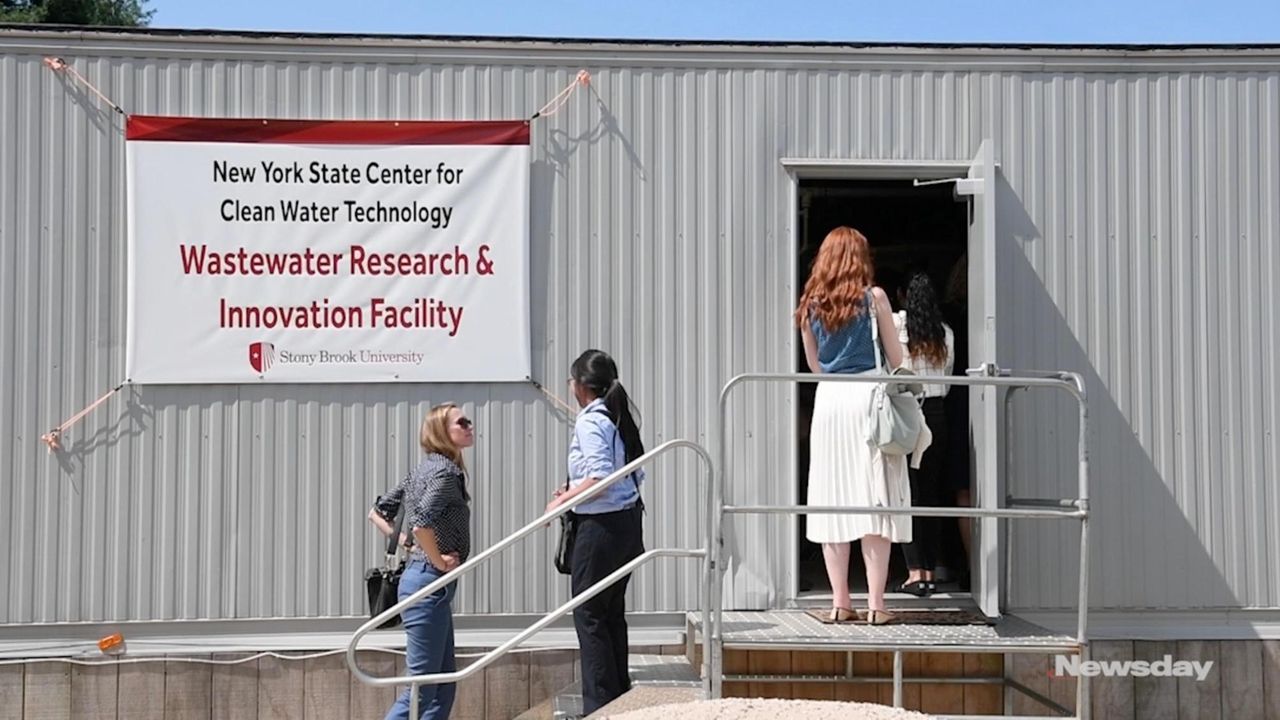 The new Wastewater Research & Innovation Facility has nitrogen-removing technologies that would clean wastewater, and it was built near a Suffolk County wastewater pumping station to provide a constant supply of wastewater for research.

“Not only is … [this center] going to help address and solve the nitrogen problem we see here on Long Island, but perhaps across the country and maybe even around the world,” said Carrie Meek-Gallagher, regional director of the state Department of Environmental Conservation.

The facility’s main component is a room full of nitrogen-removing biofilters, or NRBs, an alternative to traditional wastewater treatment systems. The main goal is to make NRBs as small as possible.

Essentially, an NRB consists of a layer of sand on top and a layer of wood chips on bottom through which wastewater flows from top to bottom. Each layer hosts a different type of microbe that helps take out the nitrogen as the water passes through.

"The systems we have now are incredibly effective,” said Chris Gobler, director of the clean water center, on current large-scale NRBs. “The reason they work so well is the water goes slowly though the system, and the microbes have time to remove the contaminants. As soon as you shrink them, the water runs through quicker and you don’t get the same treatment.”

That’s where this facility’s research will kick in, to make small NRBs actually work. The long-term goal? So that homeowners and businesses can use them to help reduce nitrogen pollution.

“By getting them smaller, it would just be a smaller part of your lawn, and it would be easier to install, and more affordable,” Gobler said.

Gobler said that seven other NRB systems already exist in Suffolk homes, but those are “first-generation.” The facility’s system and its research will help develop new NRBs and update those older ones, he said.

To set up this facility, the Clean Water Technology Center, itself funded by a mix of state and private dollars, spent “toward a quarter of a million dollars,” he said.

The clean water center also has other projects testing other nitrogen-removing techniques, such as a constructed wetland system where bacteria on the plant’s roots eat nitrogen.

The solutions being worked on are better than those existing currently.

One of the biggest causes of nitrogen pollution is that many Long Island homes, mostly in Suffolk County, are not connected to a sewage system. That puts nitrogen-rich wastewater either into cesspools — holding tanks that leech untreated waste into the ground — or antiquated septic systems.

“With the science being well established between overpopulation and too much wastewater, compromised drinking water quality … the collective wisdom came together to decide that we need to make change,” Gobler said.

In 2015, New York appropriated funding for its Long Island Nitrogen Action Plan, in which both Nassau and Suffolk counties have taken part.

Suffolk County began its Reclaim Our Water program, urging people to switch to new, updated septic systems that reduce nitrogen pollution. As of late June, 458 grants have been issued by the county to help pay for the switch, with 113 new systems having been installed with help from those grants, according to data from the program.

Nassau County will also launch a similar system to help residents pay for the switch, and is “hopeful to roll out the program later this year,” said Brian Schneider, Deputy County Executive for Parks and Public Works.

Both counties are also involved in other nitrogen-reducing projects under the plan, such as further studies into nitrogen pollution and upgrading treatment plants with more nitrogen-removing capabilities.

“It’s going to take a commitment of decades, but we’re on our way,” said Assemb. Fred Thiele Jr. (I-Sag Harbor).