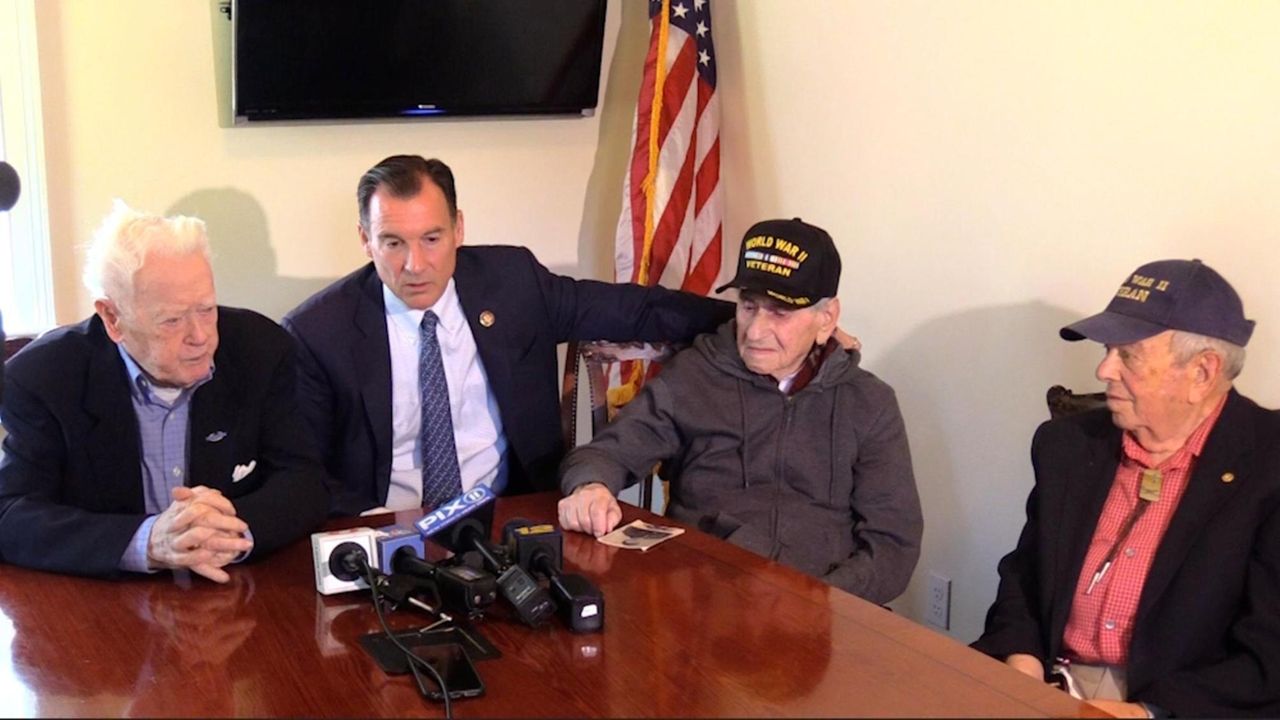 Rep. Thomas Suozzi (D-Glen Cove) met three veterans of the D-Day invasion on Monday before his trip to Normandy to mark the landing's 75th anniversary. He plans to visit the graves of 21 soldiers from his congressional district interred at the Normandy American Cemetery. Credit: James Carbone

Harry Arlin remembers the icy cold waters. The bullets flying dangerously overhead. And the putrid smell of rotting corpses littering the beaches of Normandy, France, after Allied forces crossed the English Channel to begin the liberation of most of Europe from Nazi control.

“It was so horrible,” said Arlin, 92, of Huntington, an interpreter and tank driver for the British Army during the latter stages of World War II. “The battles in the hedges were so ugly. There were dead bodies all over the place. … I don’t have good memories from Normandy.”

Arlin, a native of Czechoslovakia whose family once spent time in an Italian concentration camp, came to the United States in 1946 and would spend 12 years in the Army, later serving in the Korean War.

Rep. Thomas Suozzi (D-Glen Cove), met Monday with Arlin and two other D-Day veterans at his district office in Huntington to hear firsthand accounts of the largest seaborne invasion in history.

Suozzi will depart Wednesday for Normandy and participate in a bipartisan congressional delegation to mark the 75th anniversary of the invasion. He plans to visit the graves of 21 soldiers from his Third Congressional District interred at the American Cemetery in Normandy. He will also meet with M. Jean Quétier, the mayor of Sainte-Mère-Église, a small French village near Omaha Beach, the site where Allied forces stormed ashore on June 6, 1944, and the sister city of Locust Valley.

“These are all great heroes of our country. But if you talk to them, they think it’s just something they did. They were just kids in their late teens and early 20s,” Suozzi said. “They were scared and crying and running. In reality, if they had not made this sacrifice we’d probably all be speaking German today.”

Suozzi, a second-term Democrat, will also visit the grave of Theodore Roosevelt Jr., the eldest son of the 26th President, and leave a handful of dirt from his childhood home in Oyster Bay. At 56, and suffering from arthritis and using a cane to walk, Roosevelt Jr. was the oldest soldier to participate in the Allied invasion and died a month later of a heart attack.

Irving Goodman, 95, of Huntington, joined the Army at 17 and arrived in Normandy on the day after the invasion. He recalls seeing mass graves being dug for 3,000 Allied servicemen who drowned in the frigid waters when they were weighed down by their equipment and unable to swim to shore. Later, he would witness military uniforms stripped from the dead and later washed for other service members to wear.

“I couldn’t handle that,” said Goodman, who served as a machine-gunner in an anti-artillery gun battalion. “I started to cry.”

John McHugh, 95, of Whitestone, was part of a second wave of American troops to land at Omaha Beach. McHugh, a soldier with the U.S. Army First Infantry Division, known as “The Big Red One,” spent much of the day under fire from Nazi soldiers while crawling on the sand to reach the bluffs.

“You are scared stiff,” said McHugh, who received the Silver and Bronze stars for his heroism. “You are absolutely petrified. You automatically run. As they say, it was a bad day.”

McHugh returned to Normandy in 1987 with his two sons.

“It was good to get back there,” McHugh said as he started to well up with tears. “It was something very rare.”

Suozzi said the best way to honor the sacrifices made by Arlin, Goodman, McHugh and the young men who never came home is to improve the seriousness of the conversation in Washington.

“Politics and government have gotten kind of small and petty these days,” he said. “If we really want to be worthy of the sacrifice these men and a lot of others guys made, we have to lift up the conversation a little bit.”