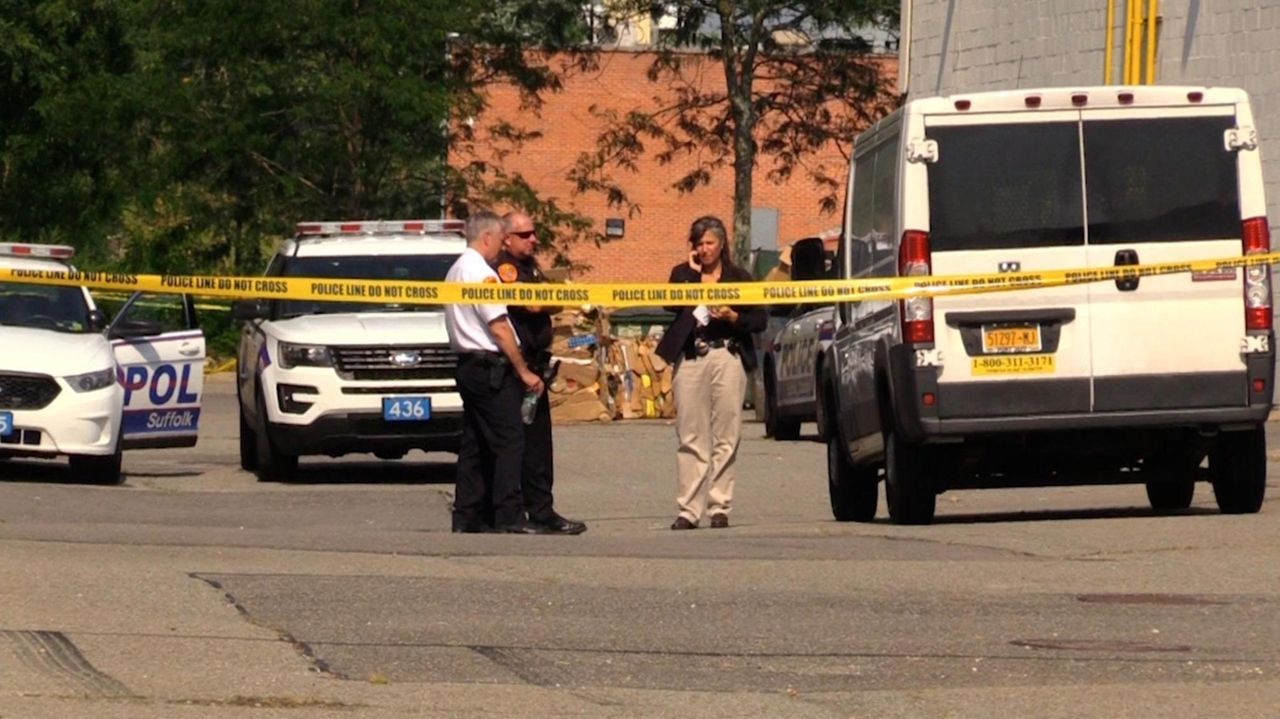 Suffolk County police said an auto parts delivery van struck two pedestrians and dragged one of them to her death in a hit-and-run in the parking lot of an AutoZone store on Route 231 in North Babylon. Credit: James Carbone

An East Quogue woman killed in a North Babylon hit-and-run left behind two young children and a family devastated by her death, her grieving sisters said Tuesday.

Annmarie Christina, 38, they said, was a strong, quick-witted woman and a stay-at-home mom who deeply loved her son Aidan, 11, and daughter Alexa, 7.

“Our main goal now is to help those kids,” a sister, Gina Christina, said Monday. “Fortunately, they have a loving father, aunts who adore them and a grandmother who would walk to the ends of the earth for them.”

Suffolk police said AutoZone driver Donnell Hicks, 26, of Queens, was driving a 2017 Dodge Ram work van north on Deer Park Avenue just after 1 p.m. Monday when he struck Annmarie Christina and a friend as they walked by the auto parts store.

Christina was pinned under the van and dragged for several blocks, police said. Her body was dislodged when Hicks made a right turn on Shade Street. Hicks did not stop, said police, who apprehended him less than an hour later in Ronkonkoma, about 18 miles away.

Hicks told police he heard a woman screaming after he turned onto Deer Park Avenue but did not immediately know she was under his van, according to a felony complaint.

“I stopped on a side street, looked under the van and saw the woman,” police said Hicks told them. “I think she was still alive.”

Christina was taken to Good Samaritan Hospital Medical Center in West Islip, where she was pronounced dead. Her friend, Eric Krems, 40, was treated  at the hospital for nonlife-threatening injuries, and released. Krems’ family declined to comment Tuesday.

“This is a horrific time,” said Lori Christina, another sister of the victim. “We are numb.”

Hicks’ attorney, Steve Fondulis of Port Jefferson, did not return requests for comment.

Gina Christina said she enjoyed a day at the beach with Annmarie on Sunday, the day before her death.

“She was down, so I made her go to the beach with Alexa, and I told her ‘I wish you could see the strength other people see in you,' ” Gina Christina said. “She sometimes doubted herself, but she was a determined and committed person.”

Christina’s death is just the latest tragedy to befall her family, her sisters said. Their mother, Donna, has struggled with severe health issues in recent years and the family has been swamped with medical bills.

The family has created a GoFundMe page to help with funeral costs and to support Aidan and Alexa.

“We are so very grateful for all of the loving support we have received thus far. We have received such kindness from strangers, food from neighbors and it's quite overwhelming,” Gina Christina wrote on the website.

“At such a difficult time, it is our faith in God that keeps us afloat. And at the end of the day, we all celebrate her life, her smile, her love and how blessed we were to have her in our lives.”

Most dangerous spots for LI driversThere were 1,073 fatal car accidents on Long Island from 2012 to 2016, according to an examination of National Highway Traffic Safety Administration data. The agency compiled that data from law enforcement. Live traffic