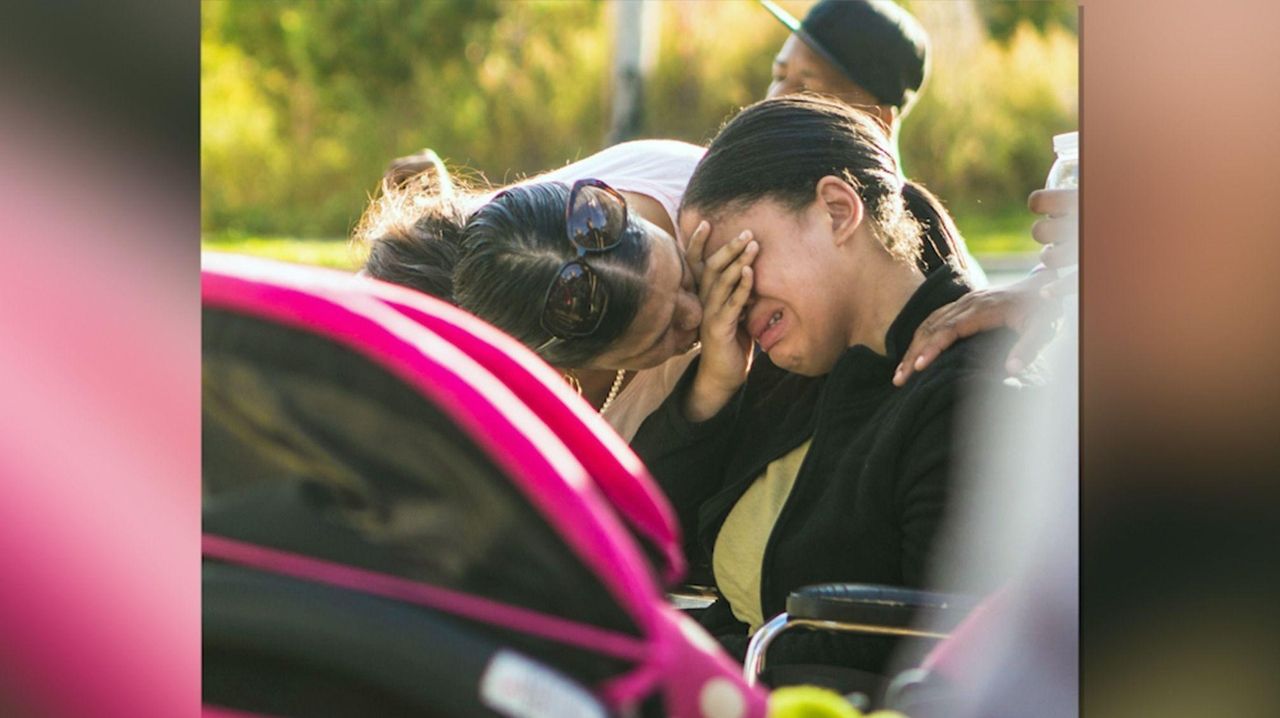 Families and friends of Keenen King and Anthony Holmes-Garriques, two young men killed on June 22, 2017 while riding a dirt bike that was reported stolen, gathered Sunday, Oct. 22, 2017 to voice their anger at the "unjust" charges brought against Christopher Bouchard, the driver of the minivan that struck the young men. Credit: Newsday / Raychel Brightman

Supporters of two young men struck and killed in North Bellport earlier this year by a minivan driver who police said may have believed the two were on his brother’s stolen bike rallied Sunday for tougher charges in the case.

Keenen King, 19, of Shirley, who was steering the dirt bike, and his passenger, Anthony Holmes-Garriques, 20, of North Bellport, were killed in the June crash on Montauk Highway. Christopher Bouchard, 27, of Mastic Beach, pleaded not guilty in June to a felony charge of reckless endangerment. The case is scheduled to be before a judge Monday.

Suffolk prosecutors have said they planned to convene a grand jury to consider higher charges.

About 30 people gathered at the crash site holding posters bearing the victims’ faces and calling for justice. Many, including the mothers of the two young men, said they felt race was a factor in how Christopher Bouchard was charged.

King and Holmes-Garriques were black; Bouchard is white.

William Ross, 56, of East Patchogue, a rally attendee, said if the victims were white: “It wouldn’t be reckless endangerment. It would be something else.”

A spokesman for District Attorney Thomas Spota did not respond to a message seeking comment Sunday.

“Anthony and Keenan were good kids,” said Tina King, 53, the mother of Keenan King, who was set to graduate from William Floyd High School. “They were just being teenagers. I know they had to be scared to death -- ‘what is this man doing behind us?’”

Police have said they believe the dirt bike King and Holmes-Garriques was riding belonged to Bouchard’s brother, but it was unclear whether they stole it. Prosecutors have said the minivan was driving at a “high rate of speed” when it crossed two lanes of traffic and struck the rear of the dirt bike, throwing King and Holmes-Garriques from the bike.

Christopher Bouchard was trying to load the damaged dirt bike into the van after the crash, while King and Holmes-Garriques lay mortally injured in the street, police have said. Witnesses blocked in the minivan until authorities arrived, police said.

Christopher Bouchard’s defense attorney John Halverson of Patchogue, could not be reached Sunday but has said previously that his client had no intention of hurting anyone.

Lina Garriques said her son, a Bellport High School graduate who had worked for three years at McDonald’s and dreamed of joining the Army, had only left her home about a half-hour before the crash, making it impossible for him to have stolen the dirt bike.

Mom of victim: ‘I’ve got to bury my son for a dirt bike?’