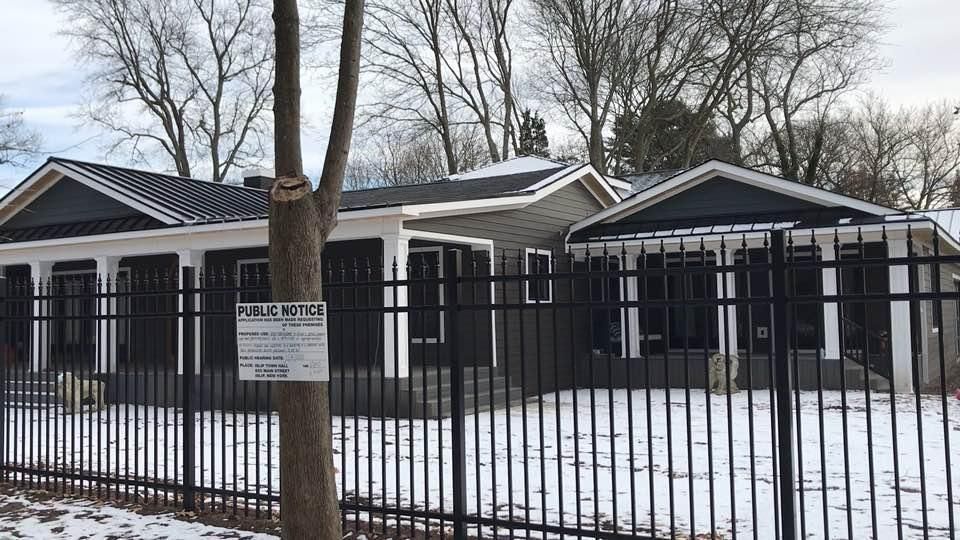 The renovation of 21 Princess Gate in the Idle Hour Artists Colony, as seen here on Jan. 3, 2018, will be the subject of a public hearing Feb. 1 (Credit: Newsday/Rachelle Blidner).

A house that has been renovated in a historic area of Oakdale without adhering to landmark rules is raising concerns for residents and preservationists.

Officials say the home, located in the Idle Hour Artists Colony built in the late 1800s, is out of character with the rest of the neighborhood and has been renovated without proper permits.

“The number one thing we want is to perpetuate the artists colony the way it is and not let it be a memory,” said Maryann Almes, president of the Oakdale Historical Society.

The home is in the center of the artists colony, which was built as the farm extension of the William K. Vanderbilt estate, Idle Hour. Chicken coops, horse stables and pig sties were converted into residences by artists in the 1920s.

Almes said the renovation is “alarming” because it occurred even with landmark protections in place.

Islip Town last year ordered work at the home to stop and cited the homeowner for code violations. A public hearing is scheduled next month on a permit request needed to continue construction.

Homeowner Kenneth Giordano said his house never matched others in the colony, noting his 29,000-square-foot property on Princess Gate is larger than the typical lot.

He referred questions to his attorney, Barry Tuminello of Bay Shore, who did not respond to requests for comment.

Oakdale residents describe the colony as idyllic, noting its architectural resemblance to European villages. Visitors are greeted by a clock tower and brick archways. The connected houses are so small that they have been nicknamed “Hobbit houses” and the neighborhood dubbed “Munchkinland.”

The colony has been protected since the 1970s by an Islip Town planned landmark preservation overlay district, which requires homeowners to get approval for exterior changes.

Giordano purchased the 1967 home for $390,000 in 2016, property records show. The L-shaped, ranch-style home now stands out, with gray vinyl siding and a metal roof.

Giordano’s house is in a “gray area” because it was built decades after the historic homes and is still in the landmark district, said Christopher D’Antonio, the town’s senior planner. Giordano must still comply with landmark rules and obtain a town certificate of appropriateness and building permit to renovate.

Giordano, who runs West Babylon-based Six G’s Roofing, applied to the town planning board for a certificate of appropriateness on Sept. 13, records show.

If the planning board denies the certificate, it could require that the home be reverted back to its prior appearance, though that decision is unlikely, D’Antonio said.

“I don’t want to think about the gnashing of teeth involved in that action, because it’s a private property owner,” D’Antonio said.

Giordano’s representatives have been working with town officials on the design and plan to add a brick veneer on part of the home and a cupola, a small dome-like structure adorning the roof, D’Antonio said.

Gwyeth Smith Jr., who lives across the street, said he hopes the “beautiful” renovation will increase area property values, which have “taken a dive” in the past 10 years.

“Frankly, I think it is a wonderful addition to the community,” Smith, 72, said.

Other area residents said they are concerned that the home’s renovation could pave the way for other properties in landmarked areas to be altered. They said they especially worry about how it would impact an effort to get landmark district designation for the Vanderbilt estate’s main house on the former Dowling College campus.

Devin Kennedy, who grew up in the artists colony, said the renovation “is going to set the tone for what’s going to happen with the rest of the neighborhood.”

“I knew it at its most magical,” Kennedy said of the area. “I don’t want it to lose its aesthetic, along with the creative spirit that was there as well.”