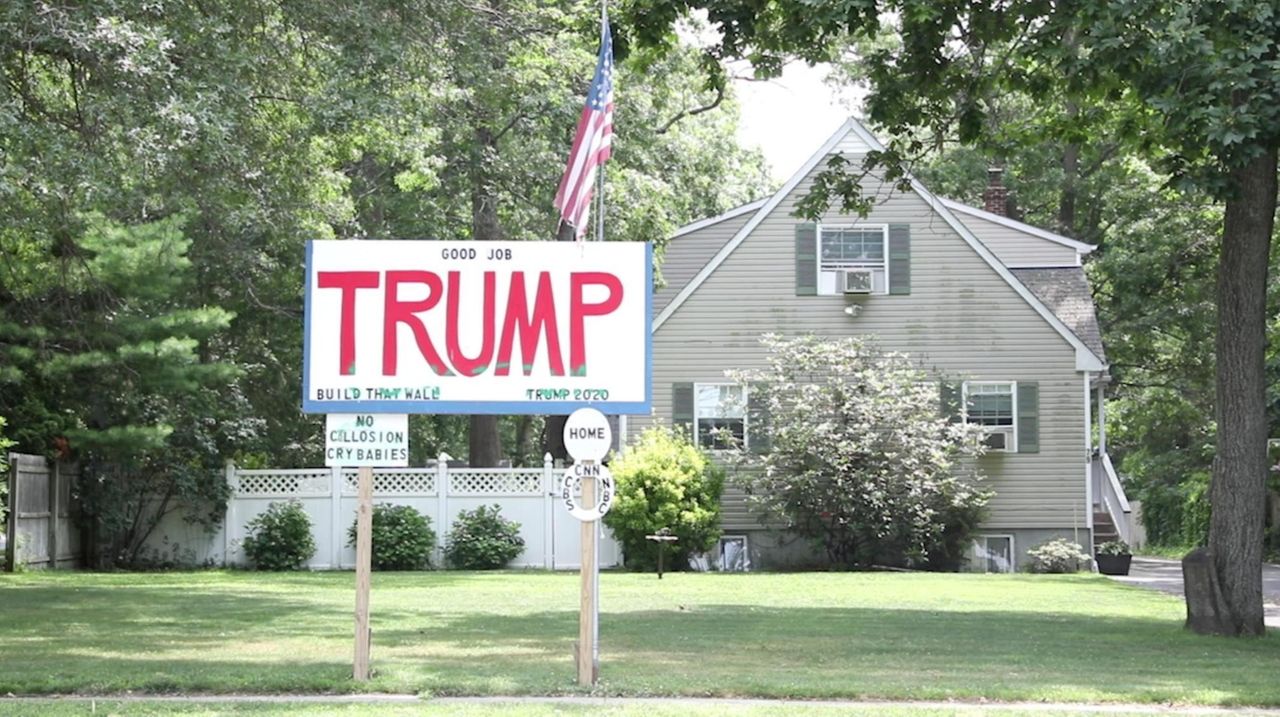 A pro-Trump and anti-media billboard that sits on private property is turning heads in Oakdale. Islip officials have fielded a few complaints about it, but say it’s on private property, is not obscene and doesn’t obstruct anything — so the sign stays. Credit: Newsday / Morgan Campbell

Oakdale resident Alan Herrick says he is within his rights to display his 10-foot Trump sign on his front lawn despite objections from some neighbors — and Islip officials agree, calling it free speech.

The plywood sign that reads “GOOD JOB TRUMP” has been suspended high on Herrick’s lawn against two wooden poles for about a year. As news events played out during President Donald Trump’s time in office, Herrick has added messages to the homemade sign, including “BUILD THAT WALL” and “TRUMP 2020.” He also fastened an open toilet seat and cover to the bottom of it with lettering on the seat — CNN, NBC and CBS. The words "FAKE NEWS" are written in marker. Another additon to the sign reads: “NO COLLOSION” [sic] “CRY BABIES.”

Herrick, 75, lives across the street from the Oakdale-Bohemia Middle School and a half-mile from Sunrise Highway, a major thoroughfare in and out of the hamlet. The sign has proved as divisive as the nation’s politics, drawing the ire of some residents who call the political billboard an eyesore.

“That’s too bad. I’m for the guy. I’m letting everybody know that I am for the man,” Herrick said in an interview last Thursday. “If they don’t like it, they can come meet me in the backyard if they want.”

Islip spokeswoman Caroline Smith said the town has received two complaints about the sign and code enforcement workers have investigated. The sign is on private property, and not on Islip land, and does not need a permit, Smith said.

“There was no sight obstruction, and it’s not obscene,” she said in an email. “Code enforcement has the authority to regulate obscenities under the Supreme Court precedent, but it’s a relatively high standard. This is a case of protected speech.”

The nearby middle school is part of the Connetquot Central School District. School officials did not return calls for comment.

Oakdale resident Sal Longhitano, 73, said even if the sign sits on private property, its sheer size and location across from a school are problematic.

“It’s too big. It’s an eyesore. It needs to come down,” Longhitano said. “It’s a polarizing kind of statement being made right in front of the school. Instead of Trump’s name on there, if it was Obama’s name on there, I would be equally concerned.”

Lesa Combs, 63, an Oakdale resident, said: “To put something that loud, on a busy, busy road next to a school … it looks horrible for people coming into our town.”

Herrick’s neighbor, Teresa Backowski, 60, is “disappointed” in Trump’s first years in office and said the sign is an eyesore, but it's “a free country. He’s got his opinions.”

Herrick, a retired contractor, said it took him a couple of days to make the sign. And it has received all kinds of attention since it’s been up, including being defaced and written over with vulgarities. The sign has also been egged, he said. Some drivers have gestured crudely at Herrick as they pass by, but others have mailed him cash for "sign maintenance" and stopped by his home to thank him.

“It’s my property. My thoughts. I’m not hurting anybody,” he said.