Suffolk police investigators at the scene of the one-car crash on North Wellwood Avenue in Lindenhurst on Monday, Oct. 9, 2017. Credit: James Carbone

An early morning car crash left two young people dead and two others critically injured Monday after the teenage driver’s Mustang careened off the road, uprooted a fire hydrant, and slammed into a tree in Lindenhurst, police said.

Two Lindenhurst High School students were among those in the vehicle, officials said. The superintendent said the impact of the tragedy on the school community is “profound.”

The vehicle was so badly damaged that bystanders who went to help had to pull the two backseat passengers out through the shattered back windshield and firefighters ripped off the front doors to free the driver and other passenger, Lindenhurst Fire Chief Paul Vinciguerra said. The hydrant landed on a lawn about 50 feet away.

“This is not easy,” Vinciguerra said at the scene Monday morning. “It’s young kids. I have young kids at home too. It hits home.” 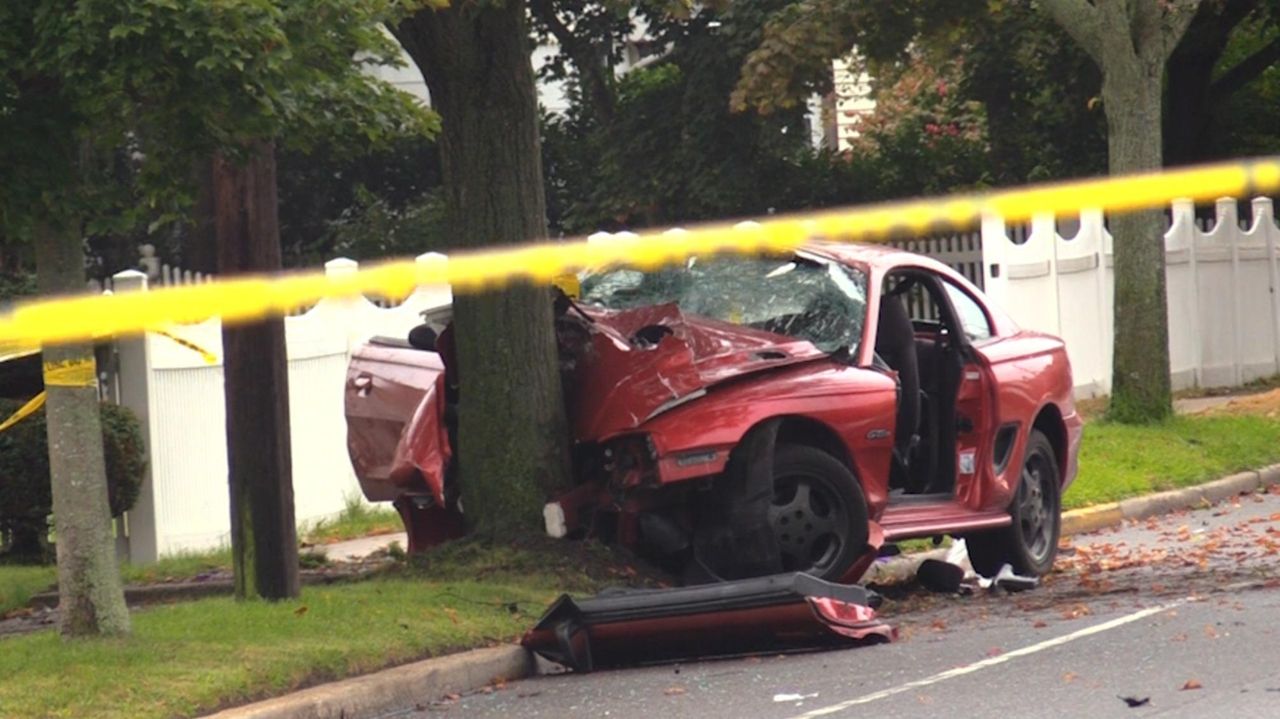 David O’Brien, 17, of Lindenhurst, was driving the 1998 Ford Mustang southbound on North Wellwood Avenue, near Lenox Street, about 5:20 a.m. when the crash took place, police said.

O’Brien and his backseat passenger Daniel Ozarowski, 16, of Lindenhurst, were taken to Good Samaritan Hospital Medical Center in West Islip where they were in critical condition, police said.

Front-seat passenger Joseph Galdorisi, 16, of Lindenhurst, was pronounced dead at the scene. His mother, Christine Galdorisi, wept Monday afternoon as she remembered her son, the youngest of five.

“He was a baby,” said Galdorisi, 47, of Lindenhurst. “He hasn’t lived his life. He still has so much more life in him and a tragic accident took him away.”

A young woman in the backseat, not yet identified by police, was taken to Good Samaritan and pronounced dead.

Suffolk police did not comment on possible causes of the crash — which took place on damp roads — citing the ongoing investigation.

Lindenhurst Superintendent Daniel E. Giordano, in a statement posted on the district’s website Monday, said Ozarowski is a student at the high school, as was Galdorisi. He described district staff and students as “heartbroken.”

“Our thoughts and prayers are with the students’ families and friends, as well as the families and friends of all those involved,” Giordano wrote. “The impact of such a tragic event is profound. As such, the school’s Crisis Response Team and school counselors will be made available to students and staff throughout the upcoming week.”

Christine Galdorisi said her son ate dinner at home around 7:30 p.m. Sunday, and the teen’s brother last saw him around 1 a.m. Monday. She said she doesn’t know the others who were in the car.

“This was a big fear of mine, of kids hanging out with other kids, you don’t know who’s driving,” she said.

She described her son as a “typical teenager” who liked to play basketball and was close to his three sisters and brother. She said he liked rap music and sometimes wrote his own rhymes, though he hadn’t performed publicly.

“He liked music; he liked to express himself through music,” she said. “He could put words to music.”

Family members of Ozarowski and O’Brien couldn’t be reached for comment.

Katherine Roethgen, who lives near the crash site, said she heard the sirens racing to the scene and called that stretch of North Wellwood Avenue — just south of Sunrise Highway — dangerous and the site of frequent accidents.

“This street is notorious for speeding and accidents,” said Roethgen, 72, and a resident for 13 years. “How many people have to die on this street for us to get another traffic light? It’s horrible.”

Vinciguerra said the stretch of roadway is “very busy” and the scene of frequent fender benders. Transporation officials referred questions about accidents in that area to Suffolk police. A spokeswoman said the department could not immediately provide accident data there.

Rafael Stanzione, 18, of Lindenhurst, who said he was a friend of two people in the Mustang, said he and the larger community of young people were struggling to make sense of the crash.

Friends of the four — some crying — flocked to the hospital Monday.

Ryan Reilly, 20, Coram, a friend of O’Brien, called his friend a “cool guy” and said he was “fun to hang out with. O’Brien loved cars, he said.

“We spent most of our time together talking about cars,” said O’Reilly, adding: “He is a good kid. It’s terrible when things happen like this to young people. I’m still in shock.”

With Scott Eidler, Michael O’Keeffe and John Valenti CORRECTION: An earlier version of this story misstated the location of the crash, which was just south of Sunrise Highway.