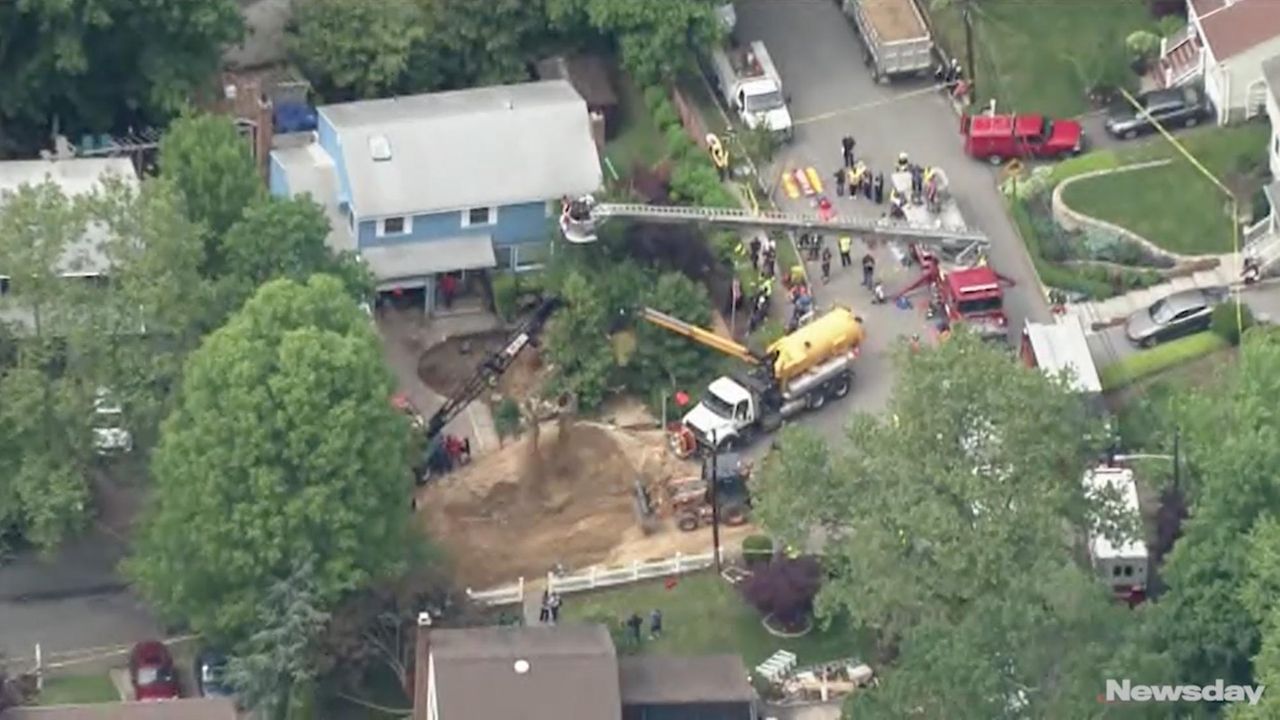 An emergency operation was underway to rescue a worker who fell into a cesspool at a home in Huntington, according to police and a town spokesman on Wednesday, May 24, 2017. Huntington Town spokesman A.J. Carter said the worker fell in while installing a new cesspool. Credit: News 12 Long Island

A worker installing a cesspool at a Huntington home Wednesday afternoon was killed after the rim of a freshly dug hole collapsed, burying him beneath a large mound of dirt, Suffolk police said.

Edward Sinnott, 59, of Huntington, was pulled from the hole just before 7 p.m., police said, and pronounced dead at the scene by a physician assistant with the Suffolk County Medical Examiner’s office.

Sinnott, who worked for Antorino & Sons in Huntington, and other workers, were in the front yard of the home on Beech Place at about 12:50 p.m. when the hole gave way and collapsed into itself, police said. A second worker fell into the hole but got out as the dirt poured in.

Immediately after the collapse, other members of the crew frantically tried to dig Sinnott out of the pile. First responders from several fire departments soon arrived to help.

Police blocked off several streets to traffic in the surrounding area, cordoned off the home with yellow tape, and kept gawkers safely away from the scene as efforts to save Sinnott continued.

Crews used a crane and other equipment, including a tractor-size device designed to suck up large amounts of dirt. By about 2 p.m., as many at the scene realized the likelihood Sinnott had survived faded, residents appeared visibly despondent.

“I’ve never heard of anything like this,” said Regina Sineno, 51, who lives nearby. “This is very sad.”

No one answered the phone at the Beech Place home.

A video shot at the moment the hole collapsed shows a steel crane claw hauling dirt out of the hole as the ground first gives way under Sinnott. Then another worker is shown plummeting into the cascading dirt but he grabs onto the rising claw and is pulled to safety as Sinnott disappears from view.

Police said the man was not injured.

Town of Huntington spokesman A.J. Carter said the cesspool “has rings that go into the ground and two rings were in when the worker fell into the hole and it collapsed over him and he got buried.”

Carter said the worker was directing a crane when the hole collapsed.

An official with Occupational Safety and Health Administration arrived at the scene later Wednesday and the agency will investigate the collapse.