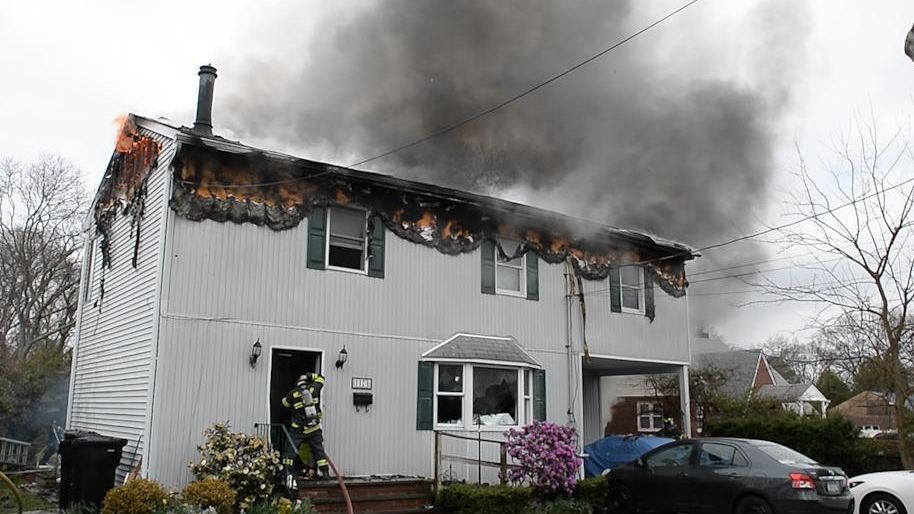 A Suffolk County Fire Communications spokesman said a fire at a Baywood house started shortly after 11 a.m. and was brought under control by 1 p.m. on Wednesday, April 19, 2017. Credit: Steve Pfost

A woman suffered an anxiety attack and a firefighter was injured during a blaze that destroyed much of a Bay Shore home Wednesday, authorities said.

Three people were in the Udall Road home when they called 911 about a blaze at 11:08 a.m., but the fire was already heavily involved two minutes later when the first of about 50 firefighters arrived, said Brentwood Fire Department Chief Michael Derbyshire, who directed operations at the scene. The residents made it out safely, he said.

The flames had started in the back of the house, spread to the second floor, then the roof and a bit of the first floor, the fire chief said.

There were several 20-pound propane cylinders on the property and the fire’s heat caused the cylinders’ relief valves to open — a safety feature to prevent explosions — and gas was released, fueling the fire, Derbyshire said.

Firefighters were “trying to cool down the tanks and trying to deal with the fire at the same time,” he said.

Derbyshire said he had to order firefighters out of the house at one point because the roof was collapsing.

It took five departments almost two hours to get the blaze under control, he said,

One firefighter was treated for a muscle injury at Southside Hospital in Bay Shore and released, he said. One of the home’s residents suffered a panic attack and was treated also, he said.

A photograph from the scene showed that the roof of the house appeared to be badly damaged, with flames shooting out and large plumes of smoke.

Derbyshire said six residents were displaced by the fire and were being helped by the Red Cross. He said the cause of the fire is being investigated by the Suffolk police arson detectives and the Islip Town fire marshal’s office.