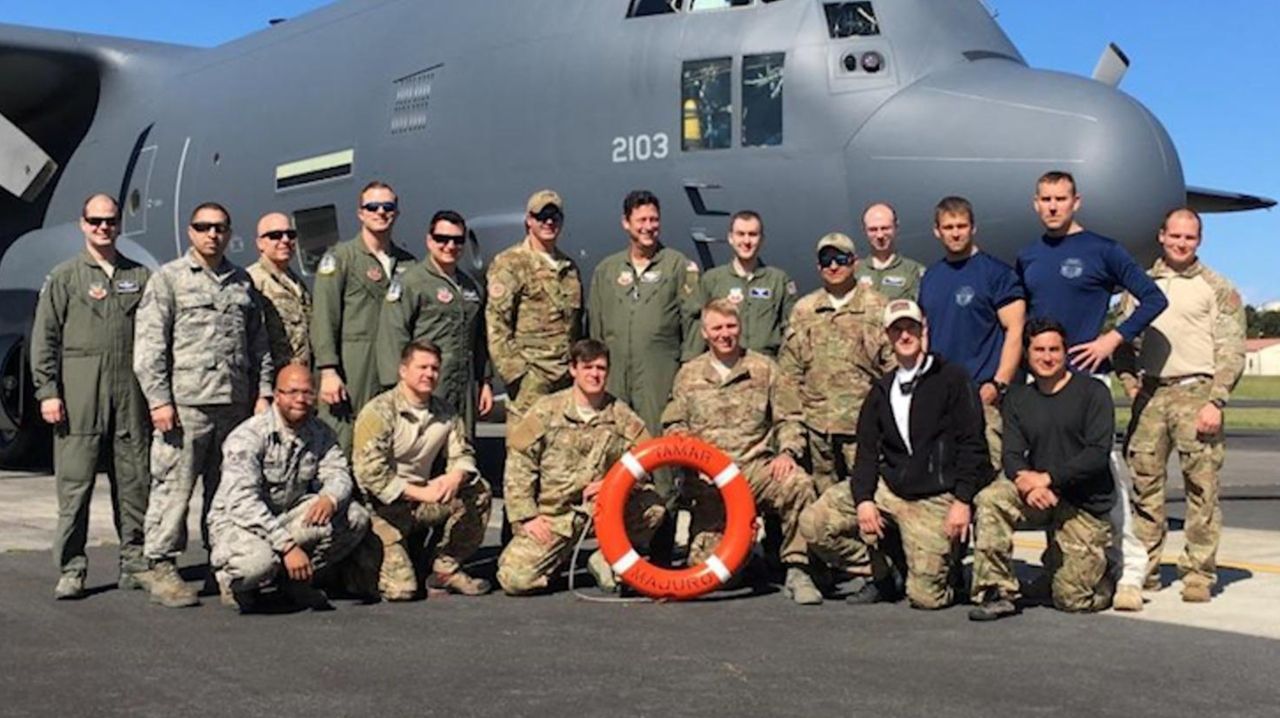 On April 24, 2017, the U.S. Coast Guard got a distress call that the Tamar, a 635-foot long bulk cargo ship, had an explosion in a storeroom.  The 106th Rescue Wing based out of Westhampton Beach sprung into action, rescuing two injured sailors on board the Tamar. Credit: Newsday / Alejandra Villa

On the morning of April 24, the 106th Air Rescue Wing in Westhampton Beach got an urgent telephone call from the military’s Rescue Coordination Center in Boston.

There had been an explosion and fire aboard a freighter 1,400 miles east of Nova Scotia. Unless medical help could get to them in time, four badly burned sailors faced death.

The RCC wanted to know whether the 106th, a National Guard unit composed of both full-time and part-time airmen, could help.

“I just happened to be here, and Jordan is my right-hand man,” said Maj. Sean Boughal, 47, of the 106th. “Once I heard about it, I called him in and started planning from that point. Jordan got a team together and started figuring out our medical capabilities.”

As are 42 other airmen associated with the 106th — 30 of them part-time citizen soldiers — St. Clair is an Air Force Guard pararescue swimmer. The story of the April rescue is a celebration of heroes doing extraordinary deeds.

Members of this elite group are Special Operations airmen whose combination of medical training and physical skills prepares them for rescue situations anywhere in the world. One of the rescuers who flew to the aid of the burned sailors had earned a Bronze Star with Valor for assisting with the rescue of four soldiers under fire in Afghanistan in 2012.

Even before being invited to join the unit, each of the rescuers had undergone two years of specialized training, including ocean swimming, parachuting and emergency medical training that includes surgical procedures.

But the unfolding emergency would put those skills to the test.

The freighter was far beyond the reach of rescue helicopters that might quickly reach the freighter and hoist the injured men aloft. Instead, commanders at the 106th decided to fly a team of pararescue swimmers to the freighter aboard a C-130 airplane, have them parachute into the ocean and make their way to the ship.

But it would not be easy.

The vessel was a five-hour flight from Westhampton Beach, and it would be dark on a moonless night by the time the seven-member rescue team could get there. Low clouds forced the rescuers to parachute from the plane from just over 1,000 feet, an altitude much lower than they normally train for.

On top of those challenges, ocean swells reaching 10 feet would make it difficult for them to locate and swim to an inflatable boat and other supplies that would be dropped into the Atlantic Ocean’s dark waters from the C-130.

Adding to the sense of urgency was the condition of the blast survivors.

One perished before the rescue team could assemble specialized medical supplies needed to treat burn victims, and before three swimmers training on Randall Island could get to Westhampton Beach. A second victim died while the rescue team was in the air.

Senior Airman Michael Hartman, 25, said he steadied his nerves in the moments before leaping from the C-130 by focusing on one task at a time.

Put on the rubberized dry suit.

Hook the parachute onto the static line.

Check the equipment of the others.

“You resort back to your training and the basics,” said Hartman, who attended William Floyd High School in Shirley, and who still does summer lifeguard stints at Smith Point Park. “That allowed me to keep the nerves down.”

Once aboard the freighter, members of the rescue team brought the men to a sleeping quarters and got to work. One of the victims had such swelling from burns inside his throat that the team was forced to perform a tracheotomy to allow him to breathe.

Rescue workers also had to cut slits into the skin of one man’s arm to relieve pressure related to his burns.

The team then provided two days of around-the-clock care until the ship came within range of Portuguese rescue helicopters, who flew the burn victims to hospitals.

Supporters of the 106th say missions like this one justify the Rescue Wing’s presence on Long Island, and demonstrate the remarkable peacetime uses for the U.S. military.

“As members of the Air National Guard we are able to employ highly skilled, trained and diverse airmen to accomplish a very complex rescue mission,” said Col. Michael Bank, the 106th’s commanding officer. “We train to that standard every day, whether wartime or peacetime, so when the call comes we can execute safely and successfully.”