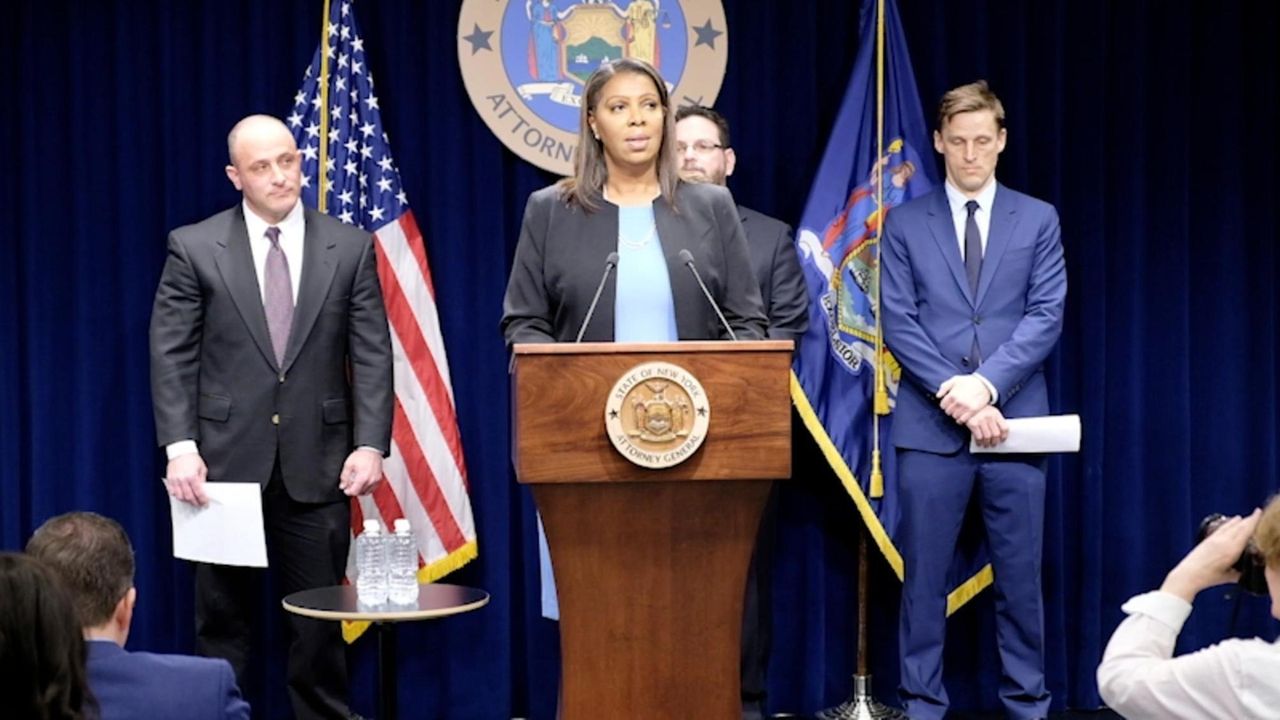 New York State Attorney General Letitia James on Thursday announced the expansion of a lawsuit in Suffolk County Supreme Court against narcotics manufacturers and distributors, including the Sackler family, alleging that they created the state's opioid epidemic. Credit: Jeff Bachner

New York targeted the wealthy American family behind Oxycontin's production in a lawsuit Thursday, accusing them and others of fraud and being "masterminds" of a statewide opioid epidemic — one that has held Nassau and Suffolk in its grip and killed nearly 3,700 in  the two counties since 2010.

The lawsuit accuses the Sackler family, whose Connecticut-based Purdue Pharma developed OxyContin, as well as other opioid makers and distributors, of willful misconduct, gross negligence and a focus on the financial bottom line that led to devastating human costs. The state attorney general's office first filed the suit in August against Purdue Pharma in Suffolk County Supreme Court. Thursday's filing in the same court by Attorney General Letitia James expanded the suit to include the Sacklers and the other companies.

“This is an extensive lawsuit that leaves no stone unturned,” James said at a news conference Thursday in Manhattan. “They put profits over patients.”

The lawsuit was filed in Suffolk because it is among counties across the state hit hardest by the opioid crisis. Separately, Nassau, Suffolk and dozens of other New York counties, have filed similar lawsuits against drugmakers in connection with opioid abuse. Suffolk was the first county in the state to do so, and the second nationwide.

The New York counties' lawsuits have been wrapped into a single filing to be initially heard in Suffolk. After a judge resolves pretrial issues, the cases will return to their home jurisdictions for trial.

Fatal overdoses declined Islandwide in 2018 for the first time in years after alarming spikes at the height of the crisis. James said the victims and their loved ones were on her mind Thursday.

“Today I’m thinking of all those families that will never be whole again,” she said.

There were 47,600 fatal overdoses nationwide in 2017 connected to opioids, according to the Center for Disease Control and Prevention.

Along with the Sacklers, the lawsuit targets six opioid manufacturers and four distributors. It seeks the creation of a fund for drug treatment programs and the end to marketing or distributing opioids in New York by the defendants unless certain safeguards are met. The suit also asks for monetary damages and restitution.

The company and family settled a similar lawsuit announced Tuesday with Oklahoma for $270 million, according to The Associated Press. It was the first settlement in nearly 2,000 lawsuits against the manufacturer, which denied any wrongdoing.

"The public announcement of the amended complaints is part of a continuing effort to try these cases in the court of public opinion rather than the justice system," Purdue Pharma's statement said Thursday. "Such serious allegations demand clear evidence linking the conduct alleged to the harm described, but we believe the state fails to show such causation and offers little evidence to support its sweeping legal claims."

Purdue Pharma officials said earlier this month they are considering bankruptcy amid the lawsuits. James said her office will pursue its case in bankruptcy court if necessary.

The Sacklers are major donors to cultural institutions, such as many of the world’s top museums and elite universities. In the past few weeks, museums including the Guggenheim in Manhattan have cut ties with the family.

Kathe A. Sackler owns an estate in Suffolk County valued at about $5 million, according to the lawsuit. She was on the company's board from 1990 to 2018.

A representative for the Sackler family said in a statement that they have always "acted properly," are committed to solutions to prevent and treat addiction, and blamed the rise in opioid use on drug smuggling.

"Government data makes clear that the opioid crisis is growing rapidly because of illicit fentanyl smuggled in from China and Mexico," the statement said, "and headline-seeking lawsuits like this only distract from the important task of identifying real solutions to that crisis.”

James accused the Sacklers of transferring money from Purdue into trusts and offshore accounts to avoid losing their millions in litigation.

“I applaud New York State Attorney General James for joining in our efforts to recoup untold amounts of public funds that were spent to assist those afflicted by this epidemic," Bellone said. "It is our hope that our lawsuit, and ones like it, will bear fruit that forever changes the way destructive — but profitable — drugs are marketed and sold across the nation.”

The companies' "collective pattern of misconduct … sparked, spread, and sustained the opioid epidemic in New York," the lawsuit stated.

Cardinal, McKesson Corp. and Rochester Drug Cooperative are additionally accused of continuing to work with Nassau and Suffolk pharmacies even after suspecting they were engaging in suspicious activity, the lawsuit states. Officials declined to name the pharmacies, saying they could face further investigation.

James highlighted a Suffolk pharmacy that handled the most opioid orders in the county and among the most in the state. The unidentified pharmacy averaged 85 suspicious orders per year, yet Cardinal continued to do business with it, according to the suit.

The Ohio-based company, in a statement, defended its work.

"Cardinal Health cares deeply about the opioid epidemic and shares the judgment of top policymakers and many others that too many prescriptions have been written for too many opioid pills over the past decade," the statement said. "We take seriously our commitment, in cooperation with everyone in the prescription drug supply chain — state and federal government regulators, pharmaceutical manufacturers, doctors and other health care providers, insurers and pharmacies — to find and support solutions to this national challenge."

Jeffrey Reynolds, president of the Family and Children’s Association — a Mineola-based nonprofit that offers counseling and outpatient drug rehabilitation treatment — said he "can't help but think" the Sackler estate "would make a great addiction treatment facility and recovery center.”

“For years pharmaceutical executives have laughed all the way to the bank while families have cried at the funerals of family members who lost their lives to addiction," Reynolds said in a statement. "The human costs associated with the relentless marketing and promotion of opioids are incalculable, but we know that every taxpayer in Nassau and Suffolk has paid dearly in terms of increased law enforcement and criminal justice costs, health care and addiction treatment expenses and all the other implications associated with this public health crisis.”

— With The Associated Press