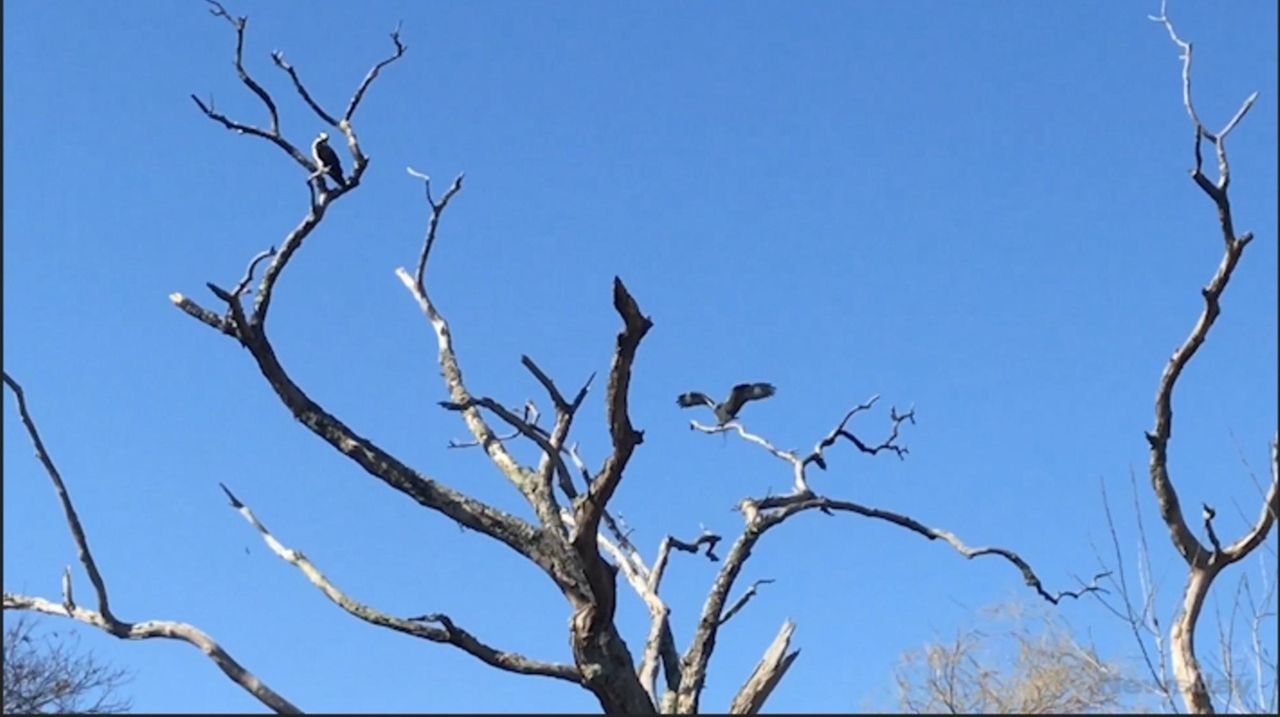 A pair of ospreys attempt to rebuild their nest in Riverside on Tuesday after it was removed by a PSEG subcontractor the day before because it was a fire hazard. Members of the community plan to march Saturday to ask PSEG to build a platform for a new nest if the utility has not replaced it by that time. Credit: Newsday / Vera Chinese

PSEG Long Island will install an osprey nesting platform in Riverside this week after the power authority removed a nest it said was a fire hazard, leaving a pair of birds without a home.

The ospreys built their nest last year atop a PSEG pole on Route 24 in Riverside, community members said, but the power authority removed it Monday after receiving reports of arcing wires.

The nest was occupied by the birds but likely inactive, meaning there were no eggs inside, according to the state Department of Environmental Conservation.

“Due to the emergency of this situation and the time of year, it was imperative to remove the nest before the birds laid eggs, had chicks and the nest caught fire,” PSEG spokeswoman Elizabeth Flagler said in a statement. “We are in the process of securing a new location and all necessary permissions to erect a pole and a platform for the osprey.”

Work to erect the new pole will begin on Wednesday, she said. Members of the Flanders and Riverside communities said they plan to march in protest Saturday if the pole is not in place by then.

“I was in tears yesterday when I came up here and heard the birds screaming for their nest,” said Kathy Kruel, a board member of the Flanders Riverside Northampton Community Association, a civic group. “It shouldn’t have happened.”

The birds could be seen on Monday and Tuesday perched in a nearby tree and periodically bringing new branches to the site of their former nest.

It is not clear how long it will take the birds to build a new habitat, but a DEC spokeswoman said ospreys do have the ability to renest before the end of egg-laying season, which can run until late June.” Anyone planning to take down a nest after March 15 is required to notify the state agency.

Still, residents like Terry Flanagan of Flanders wonder whether it will be enough time for the birds, which were once endangered due to DDT-induced eggshell thinning but are now considered a species of special concern.

“These are engineering marvels,” Flanagan said of the birds’ nests, which can be 10 feet high and remain for years. “The longer this gets delayed, the more it’s going to affect their mating season.”