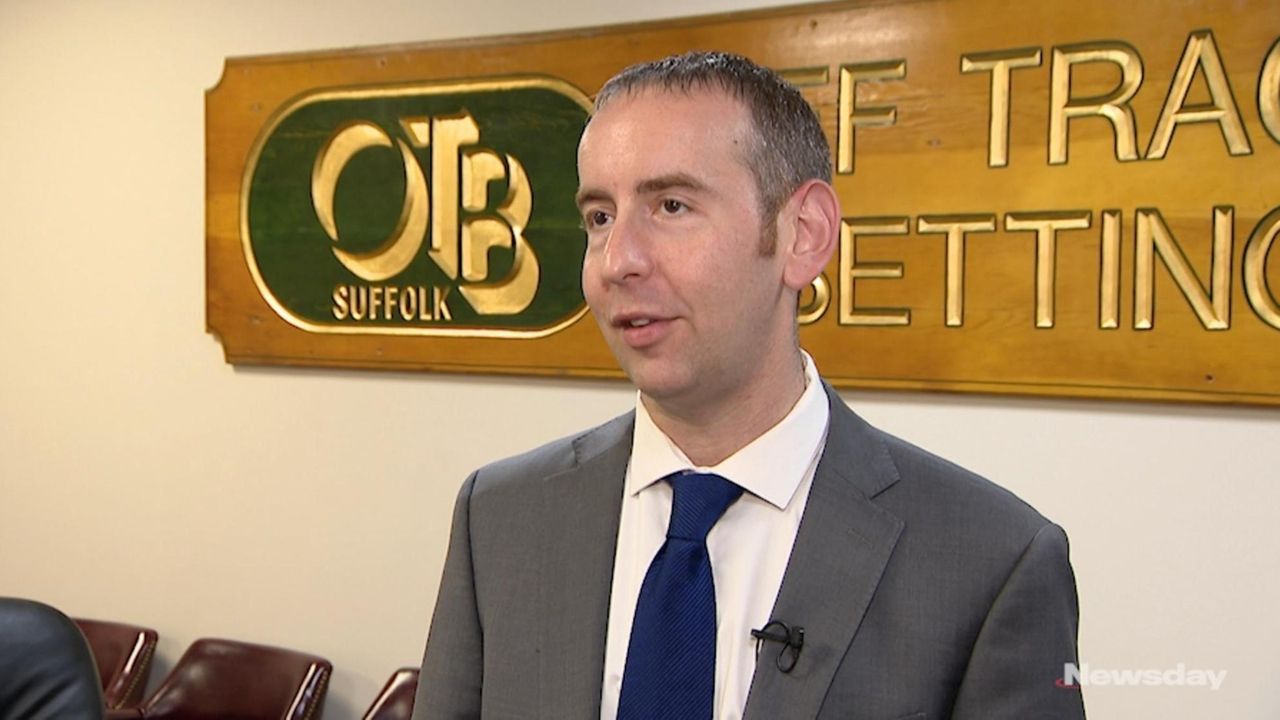 A spokesperson for Suffolk County OTB addressed a lawsuit it filed Monday against the operator of Jake's 58 casino, claiming it used the video lottery betting parlor as a piggy bank -- fleecing taxpayers out of millions of dollars to pay for construction, rent and other expenses. Credit: News 12 Long Island

Suffolk County OTB is suing the operator of Jake’s 58 casino, alleging it used the video lottery betting parlor as a “piggy bank” and “unjustly enriched” itself by overcharging the agency to pay for construction, rent and other expenses.

The suit, filed Monday in U.S. Bankrupcty Court, says the owner and operator, Delaware North, engaged in “knowing and intentional bad faith conduct and malfeasance” that included paying itself an inflated amount from OTB’s bank accounts at taxpayer expense. It accuses the company of using an OTB marketing budget as a “slush fund” for unoccupied hotel rooms, causing OTB to incur state Gaming Commission fines through faulty supervision of the facility and misusing OTB trademarks.

The suit also says Delaware North “has obfuscated and willfully blocked Suffolk OTB’s access to records” to conceal bogus accounting. “Delaware North also sought to keep the wool pulled over Suffolk OTB’s eyes by refusing to deliver the 2019 operating budget to OTB until the eleventh hour so that Suffolk OTB would be unable to meaningfully review it before it was submitted to the Gaming Commission,” the lawsuit says.

Lead attorney for Suffolk OTB Bryce Friedman of Simpson Thacher & Bartlett said in a statement: “We expect the court will force Delaware North to live up to its contract with Suffolk OTB and to open its books so we can demonstrate the full extent of Delaware North’s abuse of its position as manager of Jake’s 58.”

The casino is one of the most successful in the state, earning gross revenues of more than $6 billion since it opened in February, 2017.

OTB, which filed for bankruptcy eight years ago, uses its share of earnings to pay off an estimated $15 million in debt and transfer $13 million it owes to the county over the facility’s first 10 years of operation..

The lawsuit seeks damages of more than $5 million along with punitive damages, attorneys’ fees and other costs. It also seeks a declaration that Suffolk OTB may terminate Delaware North’s management of Jake’s 58 for cause.

“Suffolk OTB is seeking relief from the courts because we have an obligation to protect taxpayer dollars and stop Delaware North’s abuse and self-dealing,” Suffolk OTB president and CEO Phil Nolan said in a statement.

In a statement, Delaware North spokesman Glen White said the company denied the lawsuit’s “contrived allegations,” adding the firm “will vigorously defend ourselves in court.

“Having landed in bankruptcy after years of ineffective operations, Suffolk OTB, with approval of the U.S. Bankruptcy Court, turned to home-state, industry-leading Delaware North to develop and manage its video gaming operations. Under Delaware North’s management, the property has consistently outperformed financial projections, resulting in higher-than-anticipated returns for Suffolk OTB, the citizens of Suffolk County, and the State of New York.

“Delaware North invested tens of millions of its own dollars in Jake’s 58, which includes the design, construction and financing of the property... [and] has developed Jake’s 58 as a professionally-run business that makes millions of dollars for the state and community,” White said.

Suffolk OTB has staked its future on the casino amid declines in horse racing and other betting operations. Delaware North operates the VLT casino for OTB, which leases space at Jake’s 58 from the company and receives a portion of the casino’s earnings.

Since opening, the casino has been among New York’s most successful video lottery terminal gaming operations. Last month the casino’s 1,000 terminals raked in $322.9 million in wagers, according to a gaming commission report. The casino has generated more than $200 million since 2017 for New York State, as well as millions for Suffolk County, the Village of Islandia, and Suffolk OTB’s creditors, according to OTB.

Delaware North and the Village of Islandia are facing a separate lawsuit from casino opponents, who allege the village board used illegal “spot zoning” in August 2016 when it approved the facility. A federal district court judge is expected to rule on an appeal after a federal bankruptcy court judge ruled in favor of the village and Delaware North.

Delaware North is a multibillion-dollar food-service and hospitality corporation that runs hotels and operates concessions at sports arenas, airports and parks across the country, including MetLife Stadium. Company owners Jeremy Jacobs and Charlie Jacobs own the NHL’s Boston Bruins.

OTB officials said they filed the lawsuit after efforts to resolve the issues with Delaware North went nowhere.

The suit also states that Delaware North overcharged Suffolk OTB hundreds of thousands of dollars in rent by inflating the square footage of the VLT gaming facility and then paid itself from Suffolk OTB’s bank account. Last year, the suit says, Delaware North paid itself $7.3 million for hotel rooms out of an OTB marketing budget -- more than twice the amount OTB says it agreed to pay.

The suit says Delaware North also “refused to take responsibility” for violations of state gaming regulations. The company charged OTB a total of $66,000 related to violations, including serving underage gamblers.

Paul Sabatino, the Huntington Station lawyer representing casino opponents, said Monday he was surprised that OTB had filed the suit.

"It’s a classic case of no honor among thieves,” Sabatino said in an interview. “Now they’re turning on each other and they’re cannibalizing each other.

“It creates enormous pressure on the village to take a second look at what they did. ... I never dreamed that OTB and Delaware North would have this kind of falling out.”

In a statement, Islandia spokesman John Zaher said: “The village neither had advance knowledge nor is a party to this lawsuit. Therefore, it has no further comment regarding this matter.”

Delaware North and Suffolk OTB pay the village a total of $47 million over 20 years as part of a “taxpayer relief” agreement. Village officials have used the money to cut taxes, improve village services and upgrade a village park.

The Suffolk OTB casino at Jake’s 58 hotel pulls in billions of dollars each year, most of which is returned in winnings paid to bettors. Portions of the profit go to casino operator Delaware North, vendors and a public education fund. Here’s a sampling of the numbers: