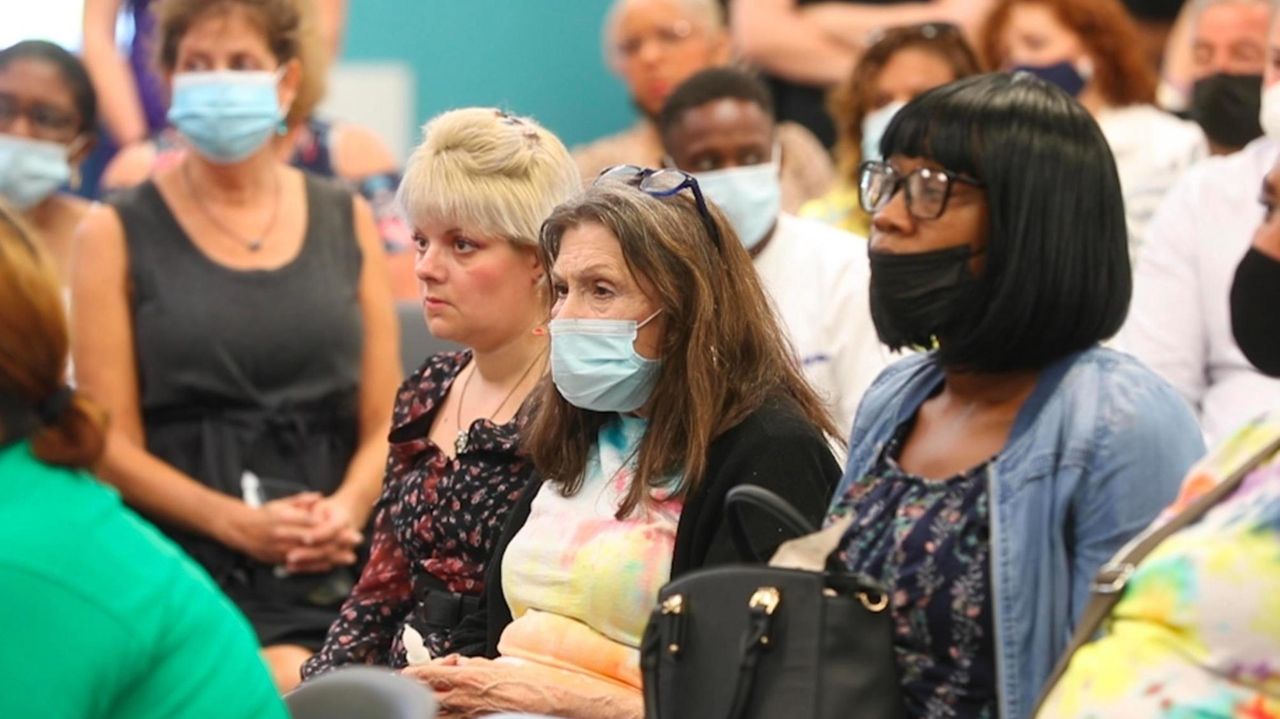 President of Family and Children's Association, Dr. Jeffrey Reynolds, spoke at a news conference on International Overdose Awareness Day at the THRIVE Recovery Center in Hauppauge on Tuesday, addressing the increase in opioid deaths across Long Island.  Credit: Kendall Rodriguez

Long Island officials vowed Tuesday to battle the opioid epidemic and reduce the number of overdose deaths on Long Island with prevention, treatment and training on how to eliminate life-threatening drug abuse.

Communities across Long Island observed International Overdose Awareness Day and pledged to help those battling addiction and boost awareness of fatal drugs like fentanyl, whose usage has spiked during the COVID-19 pandemic.

Last month, the nonprofit Community Action for Social Justice offered free naloxone, or Narcan — used to reverse an opioid overdose — and training across the North Fork, and distributed more than 100 two-dose kits in the wake of six overdose deaths between Aug. 5 and 13 in Southold and Shelter Island towns.

In 2020, 390 people died from drug overdoses, marking a 34% increase in fatalities in Nassau County and a 12% rise in Suffolk County, putting Long Island on track for its deadliest year, according to the Garden City-based Family & Children’s Association. Long Island deaths rose a combined 34% from 2019 to 2020.

"It didn’t need to be that way. We know this is not specifically a Long Island problem," Family & Children’s Association president Jeffrey Reynolds said Tuesday. "We’ve watched the numbers climb during COVID, due to the anxiety, the depression and the uncertainty that goes along with the global pandemic."

Nationally, 93,000 people died from drug overdoses during the past year, not including 156,000 alcohol overdose deaths in 2020. Reynolds said his goal is to reduce the number of overdose deaths by 50% next year, but ultimately eliminate overdose deaths completely.

Reynolds marked International Overdose Awareness Day from the association’s THRIVE Center in Hauppauge, with plans to open a new treatment facility in Bridgehampton in September.

Outreach teams from the Long Island Council on Alcoholism and Drug Dependence are handing out fentanyl testing strips to all substance users, asking addicts to disregard any product containing the lethal drug. Any users who many continue to use drugs with fentanyl are also given Narcan, said Steve Chassman, the organization’s execuitive director.

"It’s a shame we’ve done so little so far. We have to do more," Chassman said. "Today’s a day of memorial, yes, but it’s a call to action. We’re losing this fight and losing loved ones. … COVID is not an excuse. In times of great crisis, to do absolutely nothing is unacceptable."

Other communities like Babylon and Hempstead conducted Narcan training sessions on how to use it correctly.

Hempstead will host a series of free training sessions between Sept. 30 and Nov. 8.

"It is so incredibly important that all who call Hempstead Town and Long Island home take an active role in working against the troubling reality of our regional opioid epidemic," said Hempstead Supervisor Don Clavin.