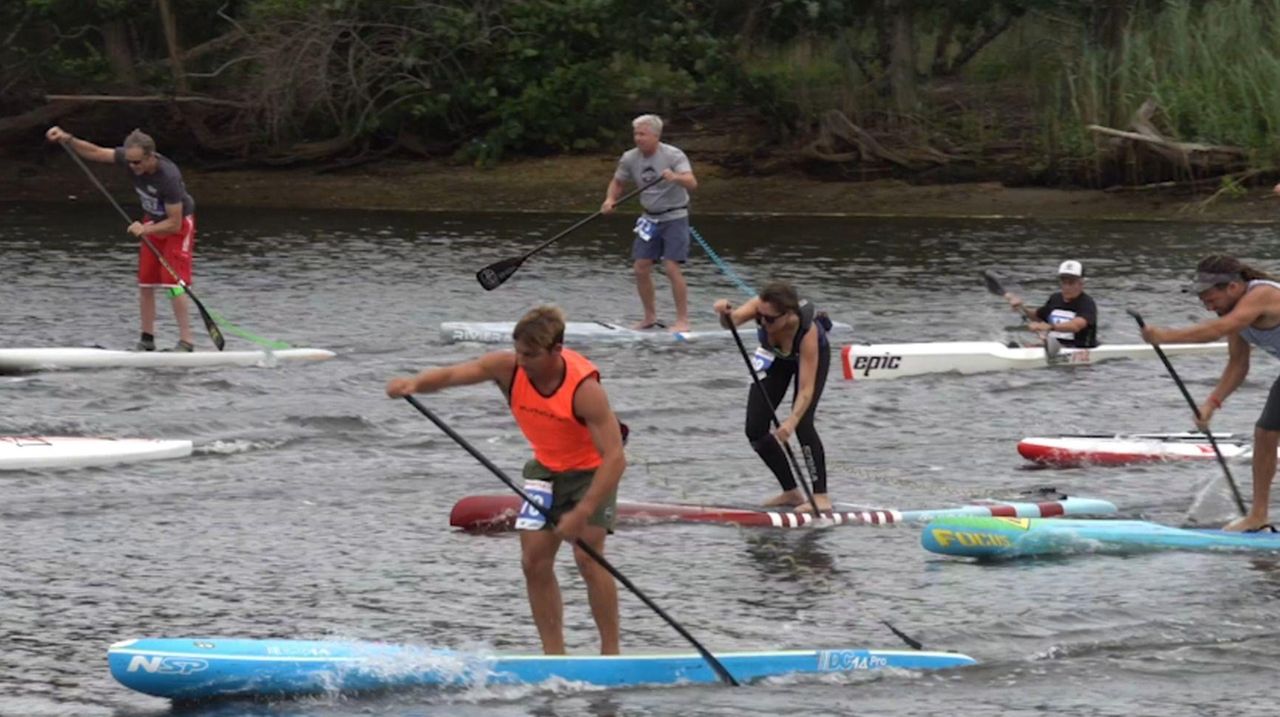 It's race day on Saturday, July 29, 2017, on the Peconic River at the annual event, Paddle Battle Long Island. The event, which is three races that are multiple miles each, is used as a fundraiser to benefit the Long Island Aquarium and the United Way Vets Build - an organization that builds homes for the veterans of Suffolk Couty.  Credit: Ed Betz

“I had nothing in my life to look forward to, nothing to compete in,” said Linnen, 35, of Riverhead, a retired professional track and field athlete who teaches physical education at Mount Sinai Middle School. “And for me, [paddleboarding] gave me another sense of competition and exercise, and it filled that void of being part of a community and working towards goals.” Linnen competed in the 2 1⁄2 -mile race.

Proceeds from the fifth annual event, which organizers said drew 150 paddleboarders and kayakers to the cool waters of the Peconic River, went to the nonprofit United Way of Long Island’s VetsBuild program and the Long Island Aquarium in Riverhead.

Racers started out strong in the 2 1⁄2- , 5- and 12-mile races, some slipping off their boards at various points, others chugging tiredly at the finish line after winning by a nose.

“And we love to see the little ones,” added Welker as she pointed to Jameson Roeber, 7, of Port Jefferson, whom she called “amazing” after he finished first among one of the boys’ paddleboard races.

His hair dripping after the race, Jameson shared a laugh with his parents, Stan and Maureen Roeber, saying he felt “pretty good” about his win. “Paddleboarding is fun,” said Jameson. “You get to surf and you get to cool off in the water when you swim.”

Maureen Roeber, 51, who sat out due to eye surgery after competing in three previous Paddle Battle events, said the competition inspired her to compete in similar paddleboard events. “It’s been a good time,” she said. “It’s a lot of good memories for the whole family.”

“It was a lot of fun, an A-plus in fun,” said Stan Roeber, 64, competing in his first Paddle Battle event after his wife signed him up. “That’s what it’s all about.”