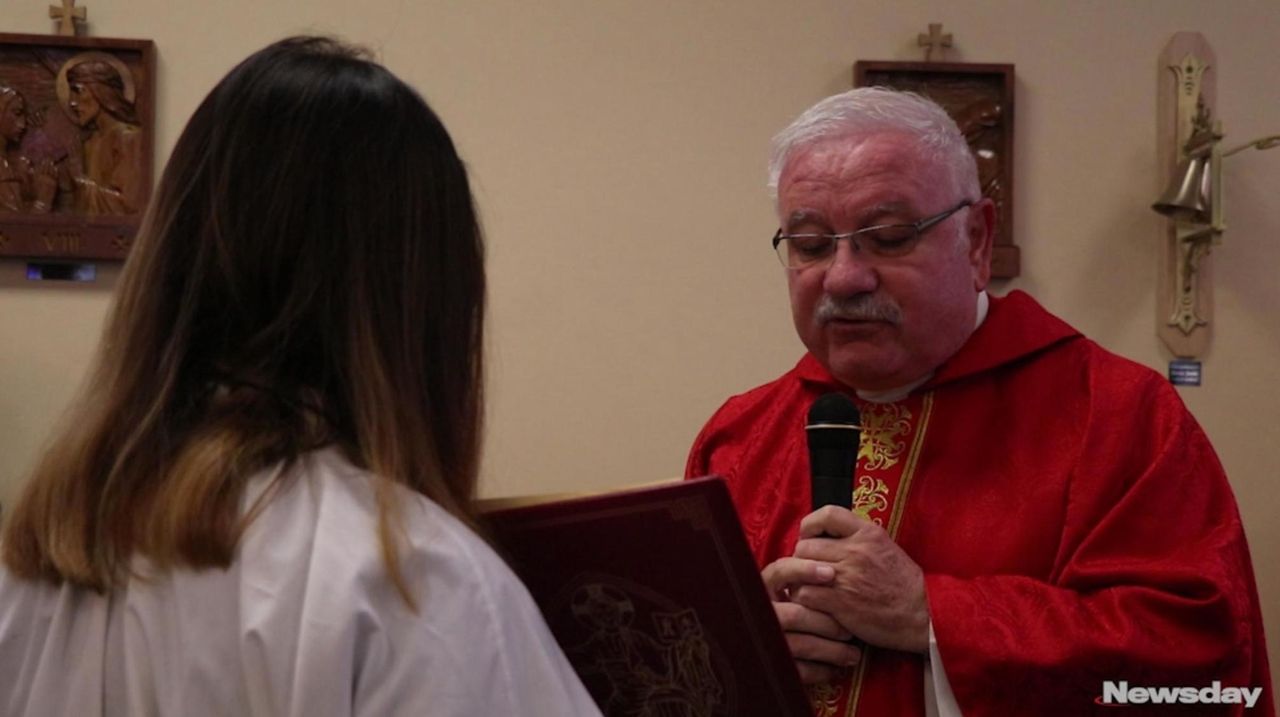 Catholics at Shrine of Our Lady of the Island in Manorville attended Palm Sunday services on Sunday. Earlier this month, vandals smashed the face of a life-size statue of Jesus on the church's grounds .  Credit: Jessica Rotkiewicz

The Rev. Roy Tvrdik of Shrine of Our Lady of the Island, during this year’s Palm Sunday Mass, drew parallels between vandalism to a statue on the grounds of the Manorville church and the crucifixion of Jesus Christ.

Earlier this month, vandals smashed the face of a life-size statue of Jesus on the church’s grounds off Eastport Manor Road. The statue, which depicts Jesus praying in the Garden of Gethsemane before his arrest, remained shattered Sunday.

“It’s quite a meditation to go up there just to look upon that image of Jesus that was defaced,” Tvrdik, director of the shrine, told the hundreds of churchgoers gathered at the chapel Sunday. “It makes me shudder and think about the Lord’s own sacrifice and . . . what he endured for our salvation.”

Palm Sunday is the start of Holy Week, which recounts Jesus’ entrance in Jerusalem, his crucifixion and resurrection on Easter Sunday. In Manorville on Sunday, as in Christian churches around the world, churchgoers fashioned crosses out of palm fronds and waved them during a procession around the chapel. The procession this year took place indoors due to the low temperature and a light hail shower, according to Tvrdik.

The Rev. Pete D’Abele, an administrator at Shrine of Our Lady who delivered the homily during the Palm Sunday Mass, said the week is a time for prayer, reflection and to spread the teaching of Jesus. It is also time to strengthen one’s convictions, unlike the people of Jerusalem who cheered Jesus’ arrival in the holy city, but largely turned on him a few days later.

The vandalism did not stop worshippers from visiting the church’s outdoor Stations of the Cross trail after Sunday’s 90-minute Mass. The pathway, where the defaced statue is located, features stations marking events from Jesus’ condemnation to his death.

Thousands are expected to visit the trail on Good Friday, which this year falls on March 30. As of Sunday, $5,485 had been raised to restore the statue, according to the church’s website, much of it from Pokemon Go players who use the ground to play the augmented reality game.

Rosa Quiros of Staten Island walked the trail Sunday to perform the Stations of the Cross because “he suffered for our sins and we have to be sorry for our sins.” She makes the trek out to Manorville every Palm Sunday for Mass and the serenity offered along the wooded path.