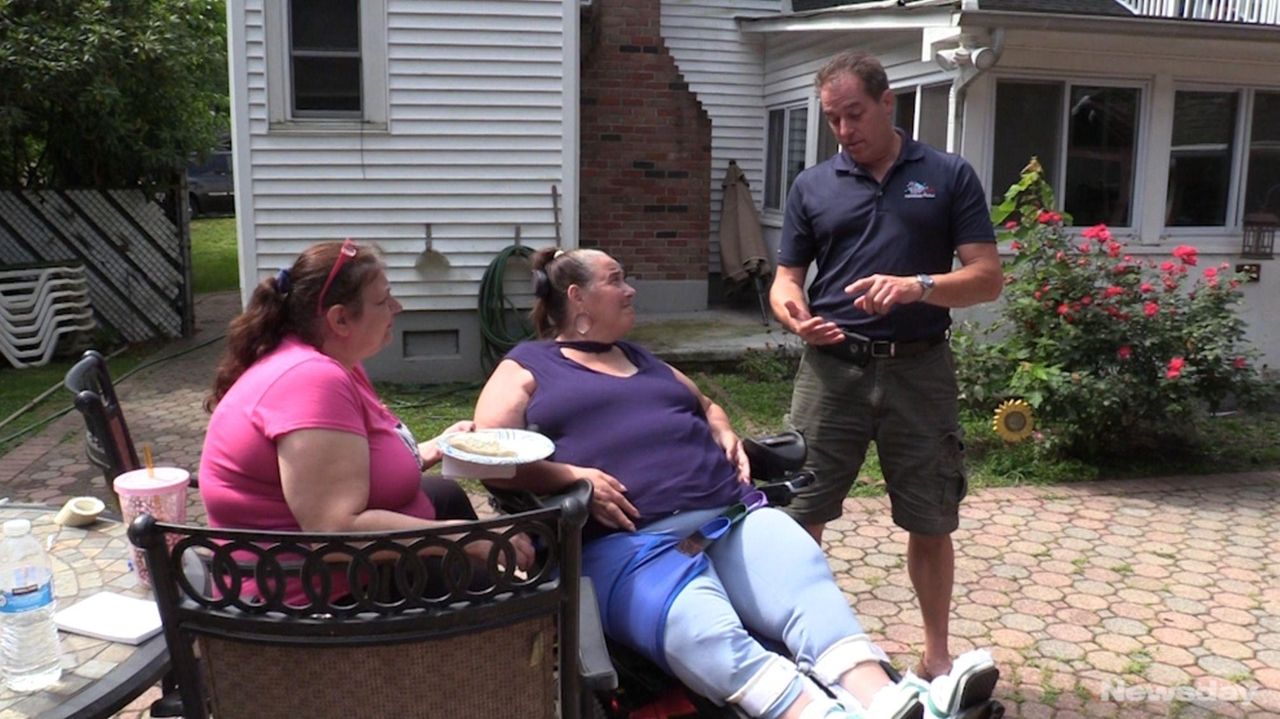 Sophia Ardi, 56, spent six months in the hospital after a multicar accident on Nicolls Road in September 2013. Now paralyzed and in a wheelchair, she could not afford to fix the inground pool at her Farmingville home. On Sunday, Aug. 6, 2017, volunteers were coordinated by The Big Splash, a pool contracting company from Setauket, that offered last week to donate a restoration job that would have cost $10,000 after meeting Ardi. Credit: Newsday / Taylor Swaak; James Carbone

When Chris Scalone learned that his family could not afford to fix their degraded pool, it was like his childhood had been “robbed again” — four years after his mother, Sophia Ardi, became paralyzed from the neck down after a car accident.

But as Scalone and Ardi, 56, sat on their patio in Farmingville on Sunday, the 40-year-old pool before them was no longer a brittle shell filled with murky water. It was an in-ground pool with a new lease on life, thanks to The Big Splash, a pool contracting company from Setauket that offered last week to do a more than $10,000 restoration job for free after meeting Ardi. She spent six months in the hospital after a multicar accident on Nicolls Road in September 2013. Scalone, also in the car, was not injured.

Six workers took their day off to reshape the sand at the base of the pool; install a new liner, salt generator and color lights; and run a new pipeline. Four manufacturing and distribution businesses — Loop Loc, Jet Line, Pentair and AquaCal AutoPilot — donated materials to the project, general manager Robert Schmit said.

“I’ve been in the industry since 1994, and this is the first time I’ve ever been involved in anything like this,” Schmit said. “It feels great.”

The home and pool has been “a celebration of our life,” said Ardi, recalling milestones such as her Sweet 16 and Scalone’s graduation. It had also become a place where “neighborhood kids would always be,” she added. But the pool hadn’t been open since summer 2015.

“I can’t wait,” she said, her eyes brimming with tears. “It brings me such joy.”

Marie Hickey, Ardi’s former personal care attendant, said she visited The Big Splash with a water sample from Ardi’s pool about two and a half weeks ago. The company initially gave Ardi a price estimate after cleaning her pool and finding leaks in the liner — a cost Ardi couldn’t shoulder. But within days of learning her story, they called her with the news.

Alexandria, one of three foster children who occasionally stay with Ardi, surveyed the pool like a kid in a candy shop.

The process of filling the 20- by 40-foot, about 35,000-gallon pool would likely take a day, Schmit said. He noted that his workers would add 800 pounds of salt Monday that will self-generate chlorine and lessen the pool’s financial burden.

By lunchtime, workers and family members had gathered to chow down on complementary hamburgers and hot dogs. The barbecue grill, covered hours earlier with dust and cobwebs, was roaring.

“I don’t know what I could possibly do to show how grateful I am,” Ardi said, smiling. “But I’m going to pay it forward.”

1:49
Where's my mail? LI postal service slower than before pandemic
John Inzillo, AKA Sonny Hudson, always hit the right note
LI's 7-day positivity rate above 2%, data shows
1:52
Going to the chapel, but first a detour to LI for that marriage license
Abandoned black swans scooped up in Southold
Cops say they believe triple killing in Farmingville was a targeted attack
Didn’t find what you were looking for?