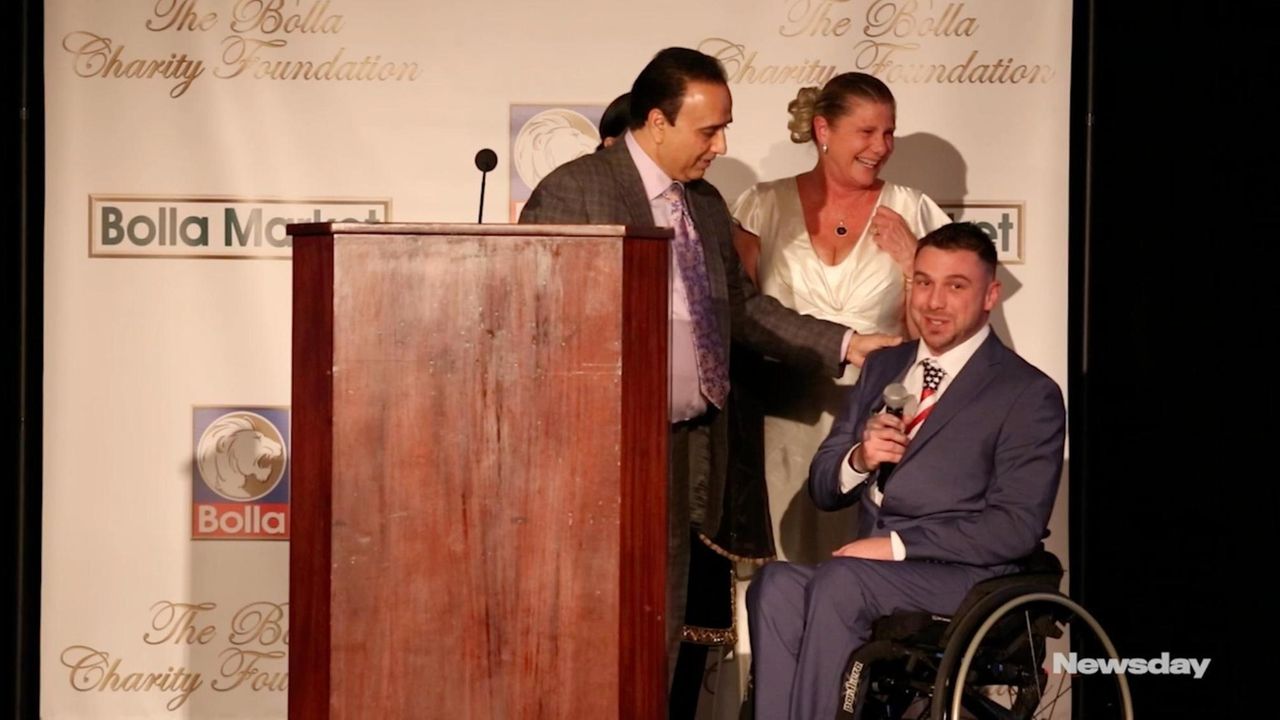 Five years after he was left paralyzed from the waist down in a hit-and-run, veteran Marine Lance Cpl. Billy Ventura will be getting a brand-new, wheelchair-accessible house of his own. The Selden resident was surprised with the news Wednesday night at an annual gala for the Garden City-based Bolla Charity Foundation, which is gifting him the house. Credit: Newsday / Shelby Knowles

Five years after he was left paralyzed from the waist down in a hit-and-run, veteran Lance Cpl. Billy Ventura will be getting a brand-new, wheelchair-accessible house of his own.

The Selden resident was surprised with the news Wednesday night at an annual gala for the Garden City-based Bolla Charity Foundation, which is gifting him the house.

During the dinner portion of the gala at the Garden City Hotel, a video played featuring Ventura’s mother, Cynthia, showing her work with Blue Star Mothers of America. News articles about the 2011 death of her oldest son, Jerome, also a veteran, flashed across the screen. It also showed the work she has done with her charity, Angel Bikes, which donated its first bicycle in the name of Jerome Ventura to Marine Capt. James Byler of Huntington, who lost both legs in Afghanistan.

The head of the Bolla Charity Foundation, Harry Singh, and others in the touching video thanked veterans for their sacrifices and vowed to help them rebuild their lives.

Finally, Billy Ventura’s name was said, and the secret was out — his mother, sitting next to him in the ballroom, was crying, and the two went up to the dais, Billy in his wheelchair, aided by a ramp.

He paused for a while, then said, “I’m speechless. I have no other words.”

Ventura, 27, was a Marine Corps reservist when he was hit in July 2013 by a driver who fled. The incident on Middle Country Road in Selden left him paralyzed from the waist down.

Ventura had been driving his father’s 2007 Suzuki motorcycle when he clipped a car stopped in front of him, fell to the road and was run over while the motorcycle lay on top of him.

Since then, he has been living with his parents in a house that Building Homes for Heroes previously helped renovate to make it easier for Ventura to get around.

Now, no longer in need of care from his parents, working at a bank and driving on his own, Ventura has been yearning for freedom in his own place.

Kim Vesey, director of military relations for Building Homes for Heroes, said Bolla Charity Foundation reached out to them and asked to partner on a home build for Ventura.

A small, dilapidated house at 249 Dare Rd. in Selden will be demolished, and a new, single-story house will be constructed, complete with everything Ventura needs to live independently: widened doorways and hallways, lower switches, raised electrical outlets, a front door that opens electronically and ramps throughout, Vesey said.

A groundbreaking is planned for the spring, and construction is expected to take 12 months.

Bolla Charity Foundation was started by Singh, CEO of Bolla Oil Corp., who grew up poor in India, emigrated in 1984 and worked as a busboy and taxi driver.

He opened his first auto repair shop in Brooklyn a few years later and now is the owner/operator or franchiser of 45 gas stations on Long Island, and 100 throughout the metro area.

“We are so proud of you, what you have done at a young age,” Singh said to Ventura. “We wanted to do everything we can.”

“You have given him the opportunity for the next steps of his life,” Ventura’s tearful mother said to Singh. “And for that, I will be eternally grateful.”