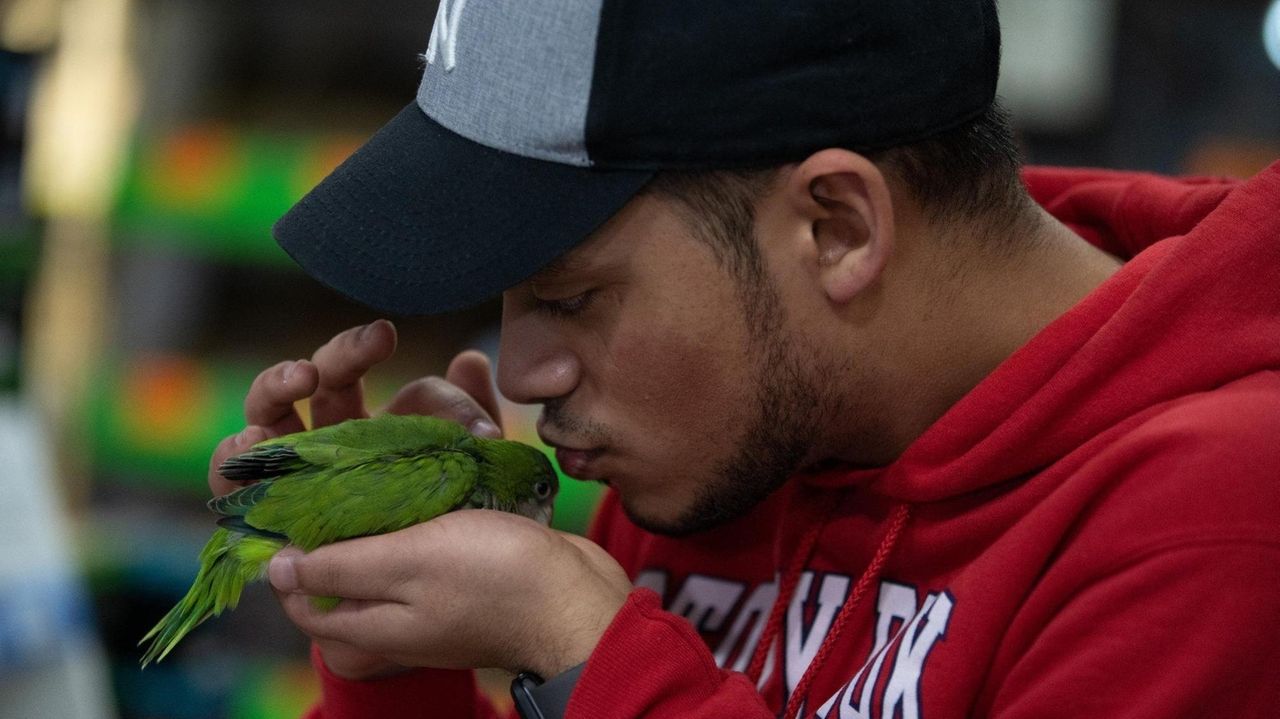 Faris Furoogh of Mount Sinai went home happy Wednesday. He received a South American Quaker parrot to replace his previous bird, Sonny, who died earlier in the month after a customer accidentally took him from a West Islip pet store where the parrot was being groomed. Credit: News 12 Long Island

The month-old parrot Furoogh held in his hands Wednesday night at BTJ’s Jungle pet store in West Islip is a replacement for the family’s South American Quaker parrot, Sonny, who tragically died earlier this month after a customer accidentally took him from the shop where the parrot was being groomed. The customer grabbed the box that held Sonny believing it was filled with mice. That customer then left Sonny in a van in freezing weather.

Their new winged companion will give the Furooghs another chance at being love birds themselves.

“He’s very cute. He’s going to grow and get used to us,” said Furoogh, 22, of Mount Sinai. "It’s going to be the family bird. … I hope he sticks around longer than the last one.”

The store’s owners replaced Sonny with the new parrot free of charge. Sonny had cost the Furooghs $600 — including the cost of a cage and food — and was family matriarch Iffat Furoogh’s pet.

The family had owned Sonny for only about a week before he was accidentally swiped. Suffolk police investigated and cleared the man who took him from the pet store. Sonny’s replacement will be named by his mother, Faris Furoogh said, adding that the whole family was “devastated” when Sonny was taken and then died.

“A week is not a long time for a pet, but the way that we got attached to it — it was our first pet,” he said.

Although Furoogh referred to his new parrot with male pronouns, Jennifer Niehoff, a wife of one of the owners of the pet store who worked Wednesday night, explained the only way to know the gender of a South American Quaker Parrot was through a DNA test. She said the birds lived between 25 and 30 years. Niehoff said the store owners were happy to be able to give the Furooghs a new parrot.

“We felt bad. We’ve been doing this for years, for 50 years they’ve been open, and we’ve never had a mishap like this happen before,” she said. “We just want them to be happy for the holidays.”

Furoogh said the family’s new parrot was not old enough to be taken home Wednesday night. It was still being fed by hand. Furoogh said his family was grateful the store’s owners stepped up.

“We thought we were going to have to work something out with the shop, but the shop reacted and said, ‘We’ll get you a replacement. Don’t worry about it.’ We felt amazing,” he said.

Parrot dies after pet shop customer's mistakeIffat Furoogh and her family brought Sonny to the shop to be groomed. It all went downhill from there. Parrot wasn't stolen after all, cops sayPolice had asked for help identifying who stole it, but the case was later determined to be noncriminal.