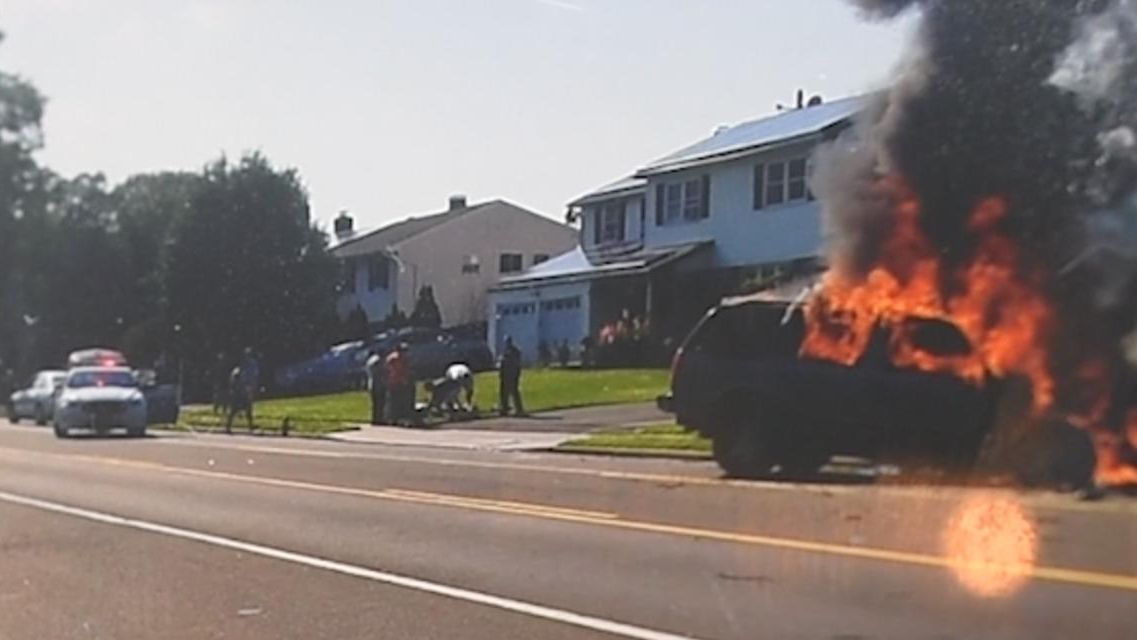 Edmond Quinones was traveling home on Wednesday, July 19, 2017, when police said he and another passerby rescued a driver from a burning SUV that had crashed into a tree in Hauppauge. Credit: Johnny Milano

Edmond Quinones wasn’t planning to take a detour in Hauppauge on Wednesday afternoon.

But as he made his way home from a meeting in New Jersey, he believes the “grace of God” led him to the scene of an accident on Townline Road, where police say he and a firefighter who lives nearby rescued a driver from a burning SUV that had crashed into a tree.

“I think it was God that told me to go down that road and take a shortcut that day,” said Quinones, 57, of Ronkonkoma.

Paul Gross, 53, of Mount Sinai, was driving a Chevy Suburban along Townline about 4:45 p.m. when he suffered an apparent medical incident and crashed, Suffolk County police said.

Hauppauge Fire Department volunteer Stephen Matteo, 31, heard the crash from his home and rushed to the scene, police said.

Quinones, who works in sales for a data communications and security company, had decided to take back roads through Hauppauge to avoid traffic on the Long Island Expressway and stopped to help when he noticed the mangled vehicle that was starting to smoke.

Quinones and Matteo pulled Gross out of the driver’s side window of the SUV, and about 30 seconds later, “the whole cab was completely engulfed in flames,” Quinones said.

“I really thought that he wasn’t going to make it, but . . . we were able to get him out,” Quinones said.

Police said the heat from the fire was intense enough to damage Matteo’s watch.

Matteo and others provided medical care to help revive Gross. After being pulled from the vehicle, Gross was coherent but in a lot of pain, Quinones said.

The Smithtown Fire Department took Gross to Stony Brook University Hospital, where he was treated for several non-life-threatening injuries, authorities said. He was admitted and was in fair condition Thursday night.

Police said Briana Stettner, 19, of Hauppauge, heard the crash and halted traffic at the intersection of Townline and Hoffman Lane so emergency vehicles could get access.