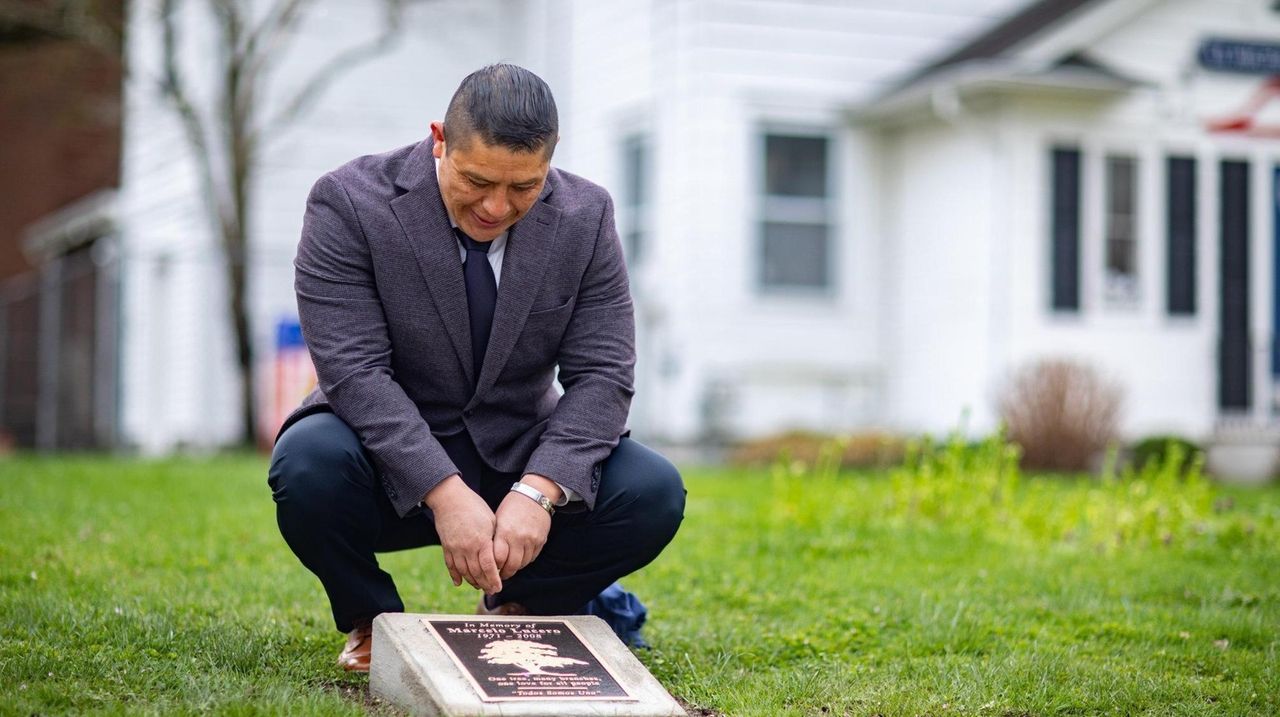 On what would have been Marcelo Lucero's 50th birthday, a plaque honoring him was unveiled at Village Hall in Patchogue. This plaque replaces one that had been there previously and honors Lucero, who was killed nearly 13 years ago by a group of teens who had targeted Hispanic men. Credit: Newsday / Raychel Brightman

Joselo Lucero stood on Monday less than a mile from where his brother, Marcelo, was killed more than 12 years ago and spoke about hope, not hatred.

He lamented that much of the country in the past four years has been wracked by racial division, including attacks on Latinos and other minorities.

But he said the Village of Patchogue — where Marcelo Lucero, 37, an Ecuadorean immigrant, was stabbed to death in a hate crime that shook Long Island — seems to have healed as residents and officials have sought to address the animosities that led to his brother’s death.

"It doesn’t matter what culture you are," Joselo Lucero, 47, of Bay Shore, said outside Patchogue Village Hall, where a plaque was unveiled honoring his brother on what would have been his 50th birthday. ​"It’s everybody ... young people, young men doing everything possible to make peace."

Marcelo Lucero was killed on Nov. 8, 2008, near the Patchogue train station, culminating a series of attacks on Hispanic men that night by a group of Patchogue and Medford teenagers.

Jeffrey Conroy, now 30, of Medford, was convicted in 2010 of first-degree manslaughter as a hate crime and other charges for stabbing Lucero to death. He is serving a 25-year sentence at Clinton Correctional Facility in upstate New York, near the Canadian border.

Six other young men pleaded guilty to assault, conspiracy and other charges for their roles in the attacks on Lucero and other Latino men that night.

Lucero’s death prompted a federal investigation of Suffolk County police, who were accused of ignoring complaints of attacks on Hispanics. The police department in 2014 entered into an agreement to reform its policies.

Last week a federal judge ruled that a 2015 lawsuit filed against Suffolk police by 21 Latinos could proceed as a class action. Lawyers for the plaintiffs are seeking the appointment of an independent monitor to oversee policing in the county. Suffolk police have declined to comment on the lawsuit.

The plaque unveiled Monday is inscribed with Lucero’s name and words that his brother invoked in a speech before a small gathering of residents, officials and reporters: "One tree, many branches, one love for all people," and "Todos somos uno," Spanish for "We are all one."

Officials said they plan to plant a tree near the plaque.

Lucero’s death shocked many in Patchogue and spurred them in the years since to heal the wounds, Mayor Paul Pontieri said.

"I think that we are a better community ... because we did what we needed to do," Pontieri said.

Joselo Lucero, who visits Long Island schools to tell his brother’s story and promote racial and ethnic understanding, said his sibling’s death continues to drive him to make Long Island safer for Hispanics.

"When my brother died, it was the first time I had to raise my voice," he said. "I want to put a face with so many immigrants in this country. ... I don’t want something like this to ever happen [again] in Patchogue."