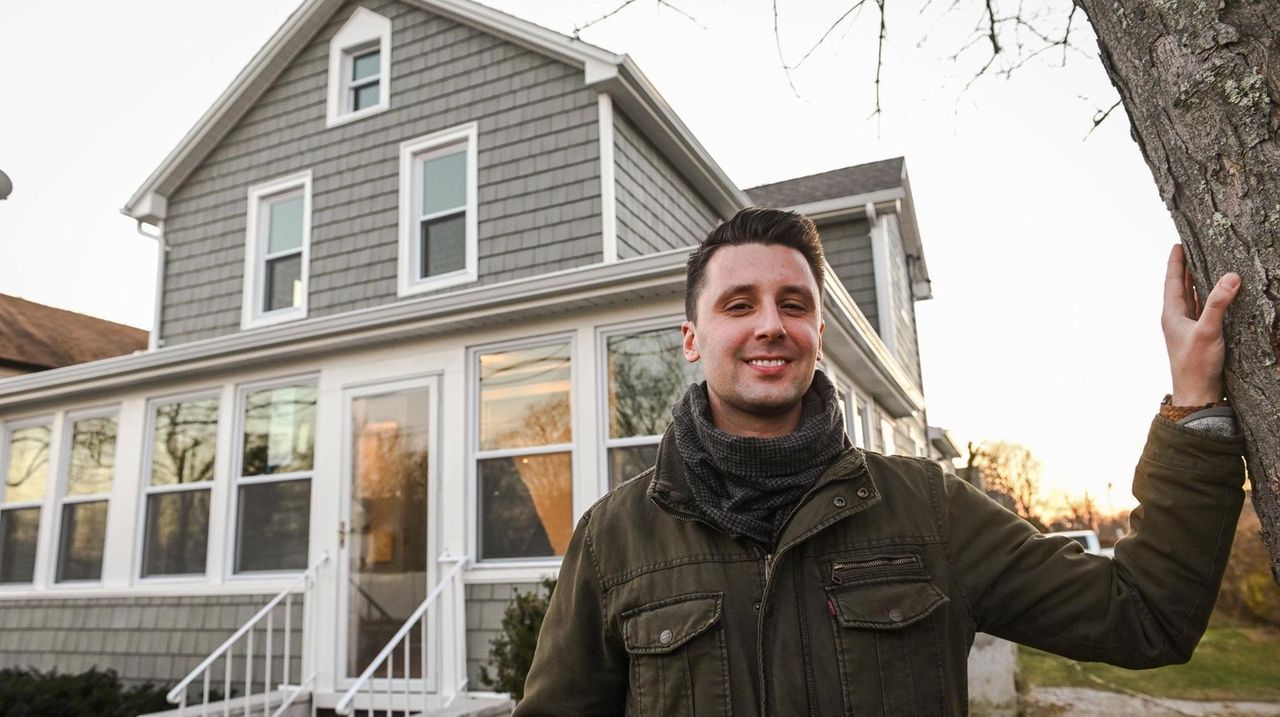 John Nelson of Patchogue recently purchased his first home, which had been remodeled by, and sold through, the Long Island Partnership Community Land Trust. Credit: Newsday / Steve Pfost

When John Nelson first saw the corner house in Patchogue, it was a broken-down mess of a place, replete with a foot of water in the basement, mice and squatters whom the neighbors complained about.

This week, though, in what seems like a flash of Christmas magic, the 29-year-old will move into the fully renovated Colonial-style, sage-green home that looks just about brand-new.

Nelson took advantage of a program aimed at addressing two of Long Island's biggest woes: the dearth of affordable housing for young adults, and an abundance of so-called "zombie" houses that drag down a community as they slowly fall to pieces.

For Nelson, single with no kids, the place has become a dream home, quickly filling with his dreams. He's already bought a Christmas tree and some colored lights. He purchased a 55-inch TV at a Black Friday sale. When the weather warms up, he'll fill the backyard shed with a lawn mower and some lawn chairs, he said.

"I'd like to get married and have kids," he said during a tour of the home Thursday. "The guest room could become a room for the kids."

He is among two dozen first-time homebuyers benefiting from a program called the Long Island Partnership Community Land Trust. He's the second to move into one of the homes. Under the program started in 2017, Nelson will own the house, but the land will remain in the possession of the nonprofit land trust.

Since the land is often the most expensive part of a home purchase, that arrangement helps bring down the price significantly, said Peter Elkowitz, president of the Long Island Housing Partnership, the nonprofit sponsoring the program along with Citi Community Development.

"We help families and individuals get into homeownership who wouldn't be able to on the open market," Elkowitz said.

Nelson earns $48,750 a year working in the publications department of the Deer Park school district. He had been looking to buy a house, but his budget kept leading him to small foreclosed properties and fixer-uppers. And he's no fixer-upper, he said. He actually lives in a one-bedroom apartment down the block from his new home on Rider Avenue.

He applied for the land trust in 2017 and entered the lottery for a home. His number came up last year.

The land trust plans on offering 51 affordable homes on Long Island, some of which will be rehabilitated and others new construction. In Nassau, the staff is working on homes in Baldwin, East Rockaway, Freeport, Hempstead, Island Park and Massapequa. In Suffolk, homes are planned for Amityville, Bellport, Deer Park, Lindenhurst, Islip, Patchogue, Smithtown and West Islip, said Elkowitz.

Here's how it worked for Nelson's two-story, three-bedroom home. Suffolk County condemned the 1920 home after it had been empty for seven years, and sold it to the Village of Patchogue for $70,000. The community land trust purchased it for $70,000 and spent $164,000 for renovations that included new roofing, siding, flooring, cabinets as well as new electrical, hot water and heating systems. Walls were knocked out to eliminate what was an illegal apartment, and the windows, some broken and others badly leaking, were replaced.

"We work with them," Elkowitz said. "All the people are counseled on homeownership — about the budgets for the home. … We'll step in if they have a problem."

Community land trusts are hardly a new idea. There are a few smaller nonprofits working in Uniondale and North Bellport, but this is the first Islandwide effort, Elkowitz said. Today, there are about 300 land trusts in the nation, he said.

On Thursday, Nelson visited the home and received the keys from Elkowitz. The house still had a building permit on the front window and the smell of fresh paint was still in the air. Mayor Paul Pontieri stopped by and the two talked about how the reclaiming of this house reflects the comeback seen in Patchogue.

Nelson grew up in this neighborhood and he remembers the downtrodden condition of Main Street when he was a kid in the early 2000s. Every other store seemed vacant, he said. But now the main drag is teeming with commerce and activity, including numerous restaurants, pubs and a performing arts center.

The mayor said this is among several affordable housing initiatives in the village, which is helping to keep the vitality that young families bring to a place.

Down the line, when Nelson sells the house, the land will stay with the trust, so the home will remain affordable.

Meanwhile, Nelson is happy that he gets to live near his family in the village. His sister and her family are also taking advantage of the program.

"My mother told me, 'You're going to find me vacuuming the house when you're not at home,' " he said.