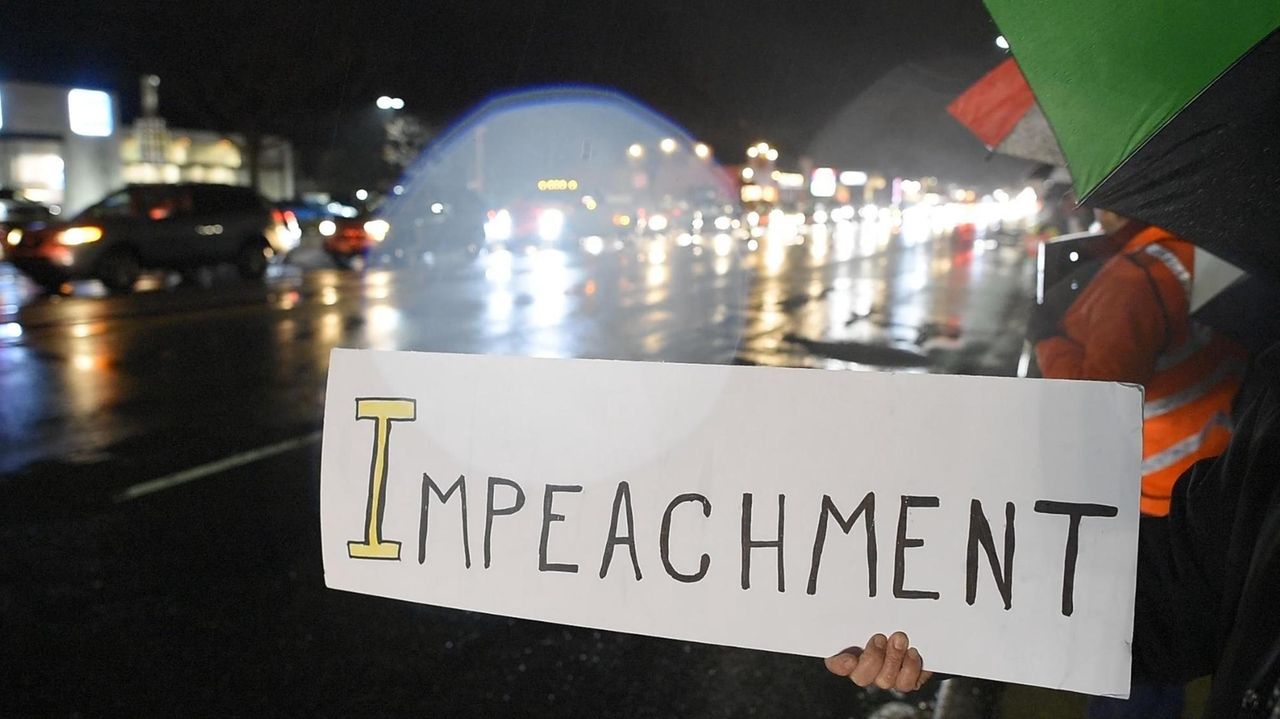 Activists gathered in Huntington Station as part of the nationwide "Nobody Is Above the Law" rally on Tuesday, a day before the House is expected to vote on articles of impeachment against President Donald Trump. Credit: Johnny Milano

More than 300 protesters in Patchogue and another 250 in Huntington Station chanted and held signs Tuesday night in support of impeaching President Donald Trump, a day before federal lawmakers were poised to decide his fate.

Patchogue protesters took their demonstration to the office of Rep. Lee Zeldin (R-Shirley), who will have a say in whether the president is impeached by the House.

“Shame on Zeldin,” the crowd chanted as they lined Oak Street outside the congressman's district office in downtown Patchogue amid cold, rainy and windy conditions.

The protests were part of the nationwide “Nobody Is Above the Law” rallies. As many as 500 of the rallies were planned across the country on the eve of the Democrat-controlled House of Representatives’ vote on two articles of impeachment against Trump.

Rallies were planned for Tuesday in all 50 states and the District of Columbia.

“I have a deep and abiding concern for where our country is going,” said protester Shoshana Hershkowitz, 43, of Setauket. “[Trump] broke the law and if we don’t uphold the law then it doesn’t mean nothing.”

Last week, the House Judiciary Committee in a party-line vote, approved two articles of impeachment against Trump — abuse of power, stemming from his solicitation of a foreign investigation into former Vice President Joe Biden, his leading 2020 Democratic rival, and obstruction of Congress, following Trump’s defiance of congressional subpoenas surrounding his Ukraine dealings.

Some at the Patchogue rally chanted, “Lock him up." The protest was co-sponsored by 16 Long Island grassroots organizations, organizers said.

The pro-impeachment views were echoed on the four corners of Jericho Turnpike and Route 110 in Huntington Station, where another 250 people crowded on narrow sidewalks. Some, like Erica Whitman Davis, a retired music teacher, held signs saying "Dump Traitor Trump" as passersby honked their horns.

“Not one of us is above the law,” said state Assemb. Charles D. Lavine (D-Glen Cove), while encouraging the demonstrators in front a Staples store to “keep the faith.”

Sharon Golden, a member of Together We Will Long Island, which organized the Huntington Station rally with Show Up Long Island, said nearly 600 registered to attend the event. A healthy turnout despite the poor weather showed how determined people are to send a message, Golden said.

“It’s a historic moment,” Golden said. “Donald Trump is the third president to be impeached. … We’re asking our representatives to vote for impeachment.”

Some of the protesters, like Mark and Sabrina Underwood of Lloyd Harbor, were first-time activists who said they were compelled to demonstrate because of the president’s alleged misconduct.

“He’s literally destroying the pillars of our democracy,” Mark Underwood said. His wife, holding a sign displaying “Impeach,” added, “[Trump] obstructs justice every day,” and asked, “When did we get so low?”

Amy Turner, a spokeswoman for the Patchogue rally, said the event gave citizens a chance to let others know Trump needed to be held accountable for his actions.

“He has asked for a foreign government to interfere in our elections for his own political gain," Turner said. "We’re outraged by that. If the president is soliciting foreign interference, we won’t have a fair election and that’s when our democracy starts to crumble.”

She added: “We’re protesting outside Zeldin’s office because he’ll be voting. And we want him to defend our Constitution. He took an oath as a congressman to defend our democracy … I’m holding out hope that there are Republicans who will find their conscience and patriotic and civic duty to uphold the Constitution.”