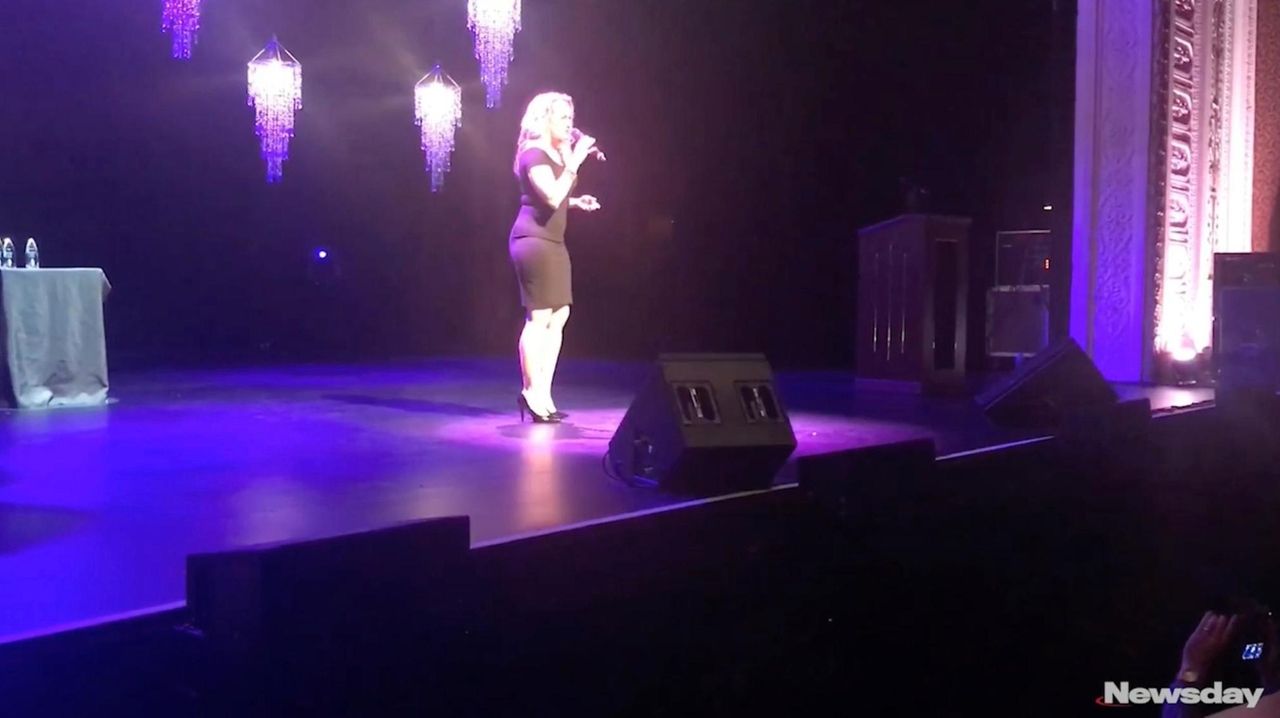 The Patchogue Theatre first opened as Ward & Glynne’s Theater on East Main Street in 1923, presenting vaudeville acts, silent films and other entertainment. The community celebrated the 20th anniversary of its reopening as a venue hosting live events on May 16. Credit: Newsday / Deon J. Hampton

The Patchogue Theatre has offered it all — and not just on stage.

The venue that hosted vaudeville acts and Hollywood stars, fell into decay and was brought back to life has been the heart of the village for the past 95 years, the past 20 as the catalyst for Patchogue’s downtown revival.

Community leaders and residents spilled onto East Main Street earlier this month to mark the 20th anniversary of the theater’s rebirth with a raucous celebration that included Champagne toasts, shared memories, lighting up a new marquee for the first time and plans for the future.

“One thing that the theater did do was start the revitalization,” of a depressed downtown after several retailers closed, leaving behind empty storefronts decades ago, said Gary Hygom, executive director of the Patchogue Theatre for the Performing Arts.

The theater building had been vacant for nearly a decade by 1996 when then-Mayor Steve Keegan concluded it was the answer to bringing back an area with a storied past and giving it a promising future.

“This is just its latest incarnation,” Hygom said of the theater. “It’s always been an anchor for the village.”

FROM VAUDEVILLE TO HOLLYWOOD

Admission prices for stage shows were 40 cents for adults and 20 cents for children.

By the end of the Great Depression, vaudeville was out of style. The theater broadened its reach and aligned itself with the new film industry to evolve, officials said.

It maintained a strong presence after converting to a single-screen movie theater, and Patchogue soon was among the places to go on Long Island, Hygom said.

During that time, the village had several hotels and offered visitors access to Patchogue Bay and Fire Island. Patchogue was then the last stop on the Montauk branch of the Long Island Rail Road from Manhattan. Passengers could stay in town or spend time there before taking a coach to the East End, officials said.

At the anniversary reception, tales of personal history with the theater echoed through the building lobby. One man recalled having his first kiss in the theater during a film.

Lifelong village resident Marc Siegel, 66, said as a kid he would sneak into the theater through a cellar to watch James Bond films.

“Patchogue was a little boring and the theater was the place to go do something,” Siegel said.

Officials at the height of the Hollywood studio period presented actress Bette Davis with the keys to the village for premiering a film at the movie theater. By this point, the venue had been renamed the Patchogue Theatre.

The movie house operated with a single screen until 1982, when it was divided and expanded into a triplex cinema. It closed five years later after suffering loses related to the recession and competition from new multiplex theaters opening around Long Island, officials said.

Then, “many stores started to leave town, and one by one, the storefronts were going out of business,” said Deputy Mayor Jack Krieger, the village’s liaison to the theater. “The village was in a slump.”

David Kennedy, executive director of the Greater Patchogue Chamber of Commerce, recalled that period: “Patchogue had lost its heartbeat. The decline of Main Street in the mid-90s ran parallel with the years the theater had been closed.”

In 2002, a study by the Suffolk County Planning Department found 18.2 percent of downtown Patchogue’s storefronts were empty, including the theater building that had been left to decay.

Keegan said he realized at the time that any revival of the village downtown would have to start with the theater.

A small group of business owners helped purchase the building while Patchogue officials applied for grants to restore it.

“We knew it was going to be a big project,” Keegan said at the anniversary celebration. “We knew it would take support from all levels of government.”

Renovations started in January 1997 and were completed in 2001, with the theater offering some shows during that time.

When it was open again, the venue gave a jump start to the broader village rebirth, officials said. Bars and restaurants started moving downtown.

“The opening of the Patchogue Theatre was a marking point to highlight when the revival of Patchogue began,” Kennedy said.

“The Patchogue Theatre has stood in line with the growth of the village,” said Miller Place resident Melissa Carfero, 33. “Patchogue is all about arts and culture.”

The village now owns the theater building, which is managed by the nonprofit Patchogue Village Center for the Performing Arts Inc.

It has 852 orchestra seats and 252 in the balcony, making it the largest performing arts center in Suffolk County, officials said. A state-of-the-art sound system, and Broadway-caliber lighting and rigging have been added over the years, and a $1 million upgrade to replace old seats and roof repair came in 2016.

As a result, the village has become “a real destination,” where residents can park their vehicles, enjoy a show and have dinner, Hygom said.

Theater ticket sales so far this year have exceeded 20,000.

“That’s a strong number and I’m happy with our programs,” said Christopher Capobianco, chairman of the theater board.

Officials said that after expanding children and family programs, they want to bring in some big-name performers. But to do so, they must raise funds and seek grants and sponsorships, officials said.

“What we’re trying to do right now is the next phase of the theater’s life,” Hygom said. “So we are producing our own shows and booking on our own more than ever before. We’re trying to morph into a world-class regional performing arts center, which means we need to have a varied lineup of entertainment from jazz to classical music, Broadway, hard rock, and county rock and folk.”

The theater has hosted 128 performances so far this year — its largest number of shows.

“We want to make it friendlier with bars, comedy, play readings and magicians,” Fabig said. “I feel like we’re always offering something different than other theaters.”