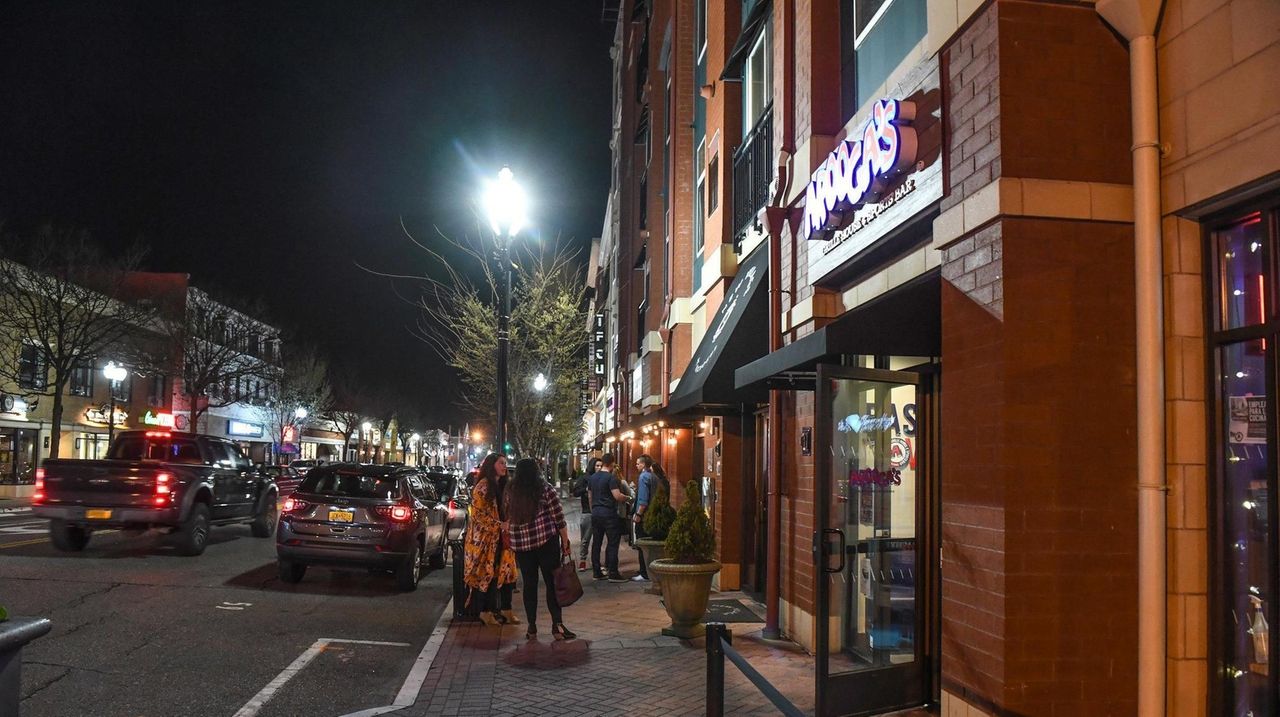 Patchogue now has six businesses that are Green Business-certified. On April 15, the manager at Arooga's Grille House and Sports Bar and co-owner of James Joyce Irish Pub & Eatery talked about how they are leading the way, with initiatives such as using hay straws, sugarcane to-go containers, low-energy lighting and chemical-free high-temperature dishwashers. Credit: Randee Daddona

John Murphy opened his pub off Patchogue's Main Street last year targeting certain things for his clientele: a warm atmosphere, cold beer and a low impact on the environment.

The dishes are sterilized with high-temperature heat rather than using detergents and soap products made with toxins.

All takeout containers are made from biodegradable sugar cane and, as of this month, the straws come from hay.

Patchogue Village is at the forefront of a green movement. It comes at the tail end of at least a decade of revitalization, leading to projects such as the $100 million New Village complex with hundreds of apartments and $1 million in renovations to its theater.

Those and other successful steps brought an estimated $693 million in economic growth and drew a wave of young residents.

Some officials say that demographic — environmentally conscious millennials — has helped set the stage for a village bringing sustainable practices to government and business.

“Patchogue is very important to us and the environment is important to us. It’s at the heart of our founders and a lot of our employees’ ideas,” said Dan Jansen, director of brewing operations at Blue Point Brewing Company, which this week opened a new facility at the former Briarcliffe College campus. “Being environmentally conscious is always at the forefront of our thinking."

Adrienne Esposito, executive director of Citizens Campaign for the Environment, said businesses such as Murphy’s and other promising ecological initiatives are what make Patchogue the leading environmentally friendly village on Long Island.

Patchogue has long been a leader in the Long Island environmental space. It was among the first Long Island municipalities to ban single-use plastic bags and the first to get rid of Styrofoam.

One of its most recent initiatives was a green business certification program. Several Patchogue business owners say ensuring their companies have a positive environmental impact is as vital as growing their business.

The brewery was one of six village businesses awarded the inaugural green business awards from PEP last month for its green initiatives.

Officials want to build off that momentum and encourage more businesses on Long Island to switch their practices to become more environmentally sustainable.

“Hopefully, it will trigger a change in mindsets for not only businesses but for residents as well,” Patchogue Village trustee Joseph Keyes said. “The ultimate goal is to make more businesses environmentally friendly. We want them to think ecologically and protect the environment.”

The nine-member committee, consisting of many Long Island environmental leaders, chose from among a dozen businesses based on sustainability, recycling programs, energy efficiency measures, employee training, and efforts to reduce single-use plastics, packaging and waste reduction.

“It was a very thoughtful process,” said Esposito, who was on the committee. “We found a lot of great, innovative technology and methods that are really reducing plastics and reducing pollution.”

"If we want to be in any town anywhere, you're going to have to start making these small changes that will make big changes for everyone," said Charles Gomes, general manager at Arooga's Grille House and Sports Bar on Main Street. "One of our staples is being a green certified restaurant. We want to do different things that other restaurants and bars don't do."

Arooga's: The dinner tables are made from reclaimed wood from fallen trees instead of those cut down. Cups are made from a plant-based material that is edible. The paper towels and to-go bags are made from recycled paper. The bathroom hand dryers are energy efficient and only emit cold or room temperature air to save on heat and electricity. All lighting inside is energy efficient. The fryer oil left over from cooking fries and hamburgers is transformed into biodegradable fuel. Next is to eliminate plastic straws for paper straws, which is more expensive.

BrickHouse Brewery: Only offers plastic straws upon request. Kitchen lights were replaced with energy-efficient lights. The brewery has a heat exchanger which recycles the hundreds of gallons of boiling water used in the brewing process for cleanup purposes. Donates spent grain to the Double D Bar Ranch farm in Manorville to feed livestock.

James Joyce Irish Pub & Eatery: The dishes are sterilized with high-temperature heat rather using detergents and soap products made with toxins. All of the takeout containers are made from bio-degradable sugarcane, and as of this month the straws come from hay.

Fire Island National Seashore: Owns the Patchogue Ferry Terminal building, which uses energy efficient lights and solar panels. There’s geothermal heating and air conditioning, the outside deck is made of composite lumber. Sidewalls are made from cement board.  Also, educated the awards committee on green businesses.

At his restaurant, the cups are made of edible, plant-based materials and the fryer oil used to cook hamburgers and fries is recycled.

"Instead of just dumping it, it's used for something else," Gomes said. "What's going to prolong us and our kids and their kids and Patchogue and Long Island is keeping it environmentally friendly."

Then there are those like Maud Franklin, general manager at the BrickHouse Brewery, who said Patchogue’s popularity can be the lightning rod that motivates other Long Island towns and villages to take the same approach.

“The village has such a heightened profile now that if we initiate things here with the amount of volume and people maybe it will just catch on,” Franklin said.

The brewery has a heat exchanger that recycles the hundreds of gallons of boiling water used in the brewing process for cleanup purposes.

Marc Siegel, owner of Blum's Swimwear & Intimate Apparel, only gives out recycled paper bags at his store, and he provided environmental business training to about 30 employees.

He said he turned to green business practices because he was fed up with seeing litter along village streets and waste in the Patchogue Bay. "I wanted to make the environment better," Siegel said. "It’s just to help out.”

Before moving to its new location, Blue Point Brewing had operated from a building on River Avenue in Patchogue since 1989. Jansen said his brewery being entrenched in the community made the business feel obligated to make change.

"We want to lead by example and show other breweries and other employers how and what you can do to make a difference for the environment," said Jansen, adding that the brewery sends spent grains to New Jersey where it's used for cattle feed.

Supporting the environment can come at a cost and may keep some businesses from fully committing to going green.

“The reason people don’t do it is because it’s expensive,” Gomes said.

For example, paper straws cost about 2.5 cents each, compared with a half-cent for a plastic straw, distributors told Newsday in August.

Gomes said Arooga’s also pays a half-cent per plastic straw, but paper straws could be purchased for as low as 1.5 cents if village restaurants joined together and bought in bulk.

"Paper straws cost seven times what it costs for plastic straws," he said.

BUILDING ON A MOVEMENT

The environmental enthusiasm in Patchogue can be traced to the revitalization of the area that began about a decade ago.

Restaurants and nightlife have turned the village into a hub for young adults while attracting new residents and visitors from around the region.

“The revitalization of Main Street, obviously, is what started drawing people’s attention to what we do here,” Keyes said. “Whatever we do environmentally, because we do get a lot of attention, more people see it and look for it and are positively influenced.”

Keyes, who said he hasn’t always been an environmentalist, has been the driving force behind Patchogue’s environmental push.

It was his idea to follow East Hampton and Southampton in banning single-use plastic bags in 2016.

Then last year, he sponsored the village resolution that made Patchogue the first Long Island municipality to ban Styrofoam containers.

“We were the first small municipality to take the step. We could have easily sat back and waited for the county or Brookhaven Town to do it, but we didn’t,” Keyes said. “We took bolder steps.”

He added, “There’s a lot more interest and cooperation environmentally. People are becoming more cognizant of what they do with their trash and recyclables.”

Dozens of cities nationwide have adopted such plastic bag bans or fees, and Dunkin’ plans to do away with polystyrene foam cups entirely by 2020.

“If I had a cup of coffee today, it will be multiple generations before it breaks down and disappears,” Patchogue Mayor Paul Pontieri said. “It’s not biodegradable.”

A lifelong village resident, Pontieri said plastics were deteriorating the waterways for years before the village took action.

"Styrofoam and plastic bags being found in the waterways was the first clue to do something. It became obvious," the mayor said.

Patchogue is in the early stages of inspecting the Patchogue River and Patchogue Bay to determine what type of debris and sediment are in the water.

Officials say the moves serve two purposes: to find out how polluted the waters are and to present the findings to schoolchildren to teach them about the environment.

PEP has been working with Brookhaven Town on purchasing four aerators to help oxygenate the Patchogue Lake, which has deteriorated with algae over the years. The town and Patchogue share ownership of the lake and the aerators are $8,000 each.

Brookhaven Town in August announced the installation of two electric-vehicle charging stations at Heritage Park in Mount Sinai as part of a plan to encourage the use of alternative energy sources.

Suffolk County lawmakers this month passed bills restricting the use of straws and banning polystyrene containers. About 45 restaurants in Suffolk and seven in Nassau stopped providing plastic straws to customers last summer as part of an environmental drive backed by Suffolk Legis. Kara Hahn (D-Setauket).

Some county leaders say Patchogue is setting the course for everyone.

Suffolk Legis. William Spencer (D-Centerport) said he looked at Patchogue’s ban on single-use plastic bag ban, along with other municipalities on the East End, before sponsoring his legislation to charge a 5-cent fee for plastic and paper bags.

There are 1.1 billion fewer plastic bags in Suffolk since the law went into effect in January 2018, he said.

“Patchogue is a great example of what downtowns should do to decrease plastic and help stop surface-water contamination,” Spencer said. “I always look to Patchogue as a partner.”

Everything you need to know about LI, NY plastic bansPlastic bans are having a moment here on Long Island and in New York. Meet 5 who fight for Long Island's environment"As environmental advocates, we speak for those who have no voice -- the plants and animals who can't vote or buy their own homes." Plastic straws stir a debate among LI restaurantsLong Island restaurants getting rid of plastic straws are discovering it isn't easy going green.  Switching ...