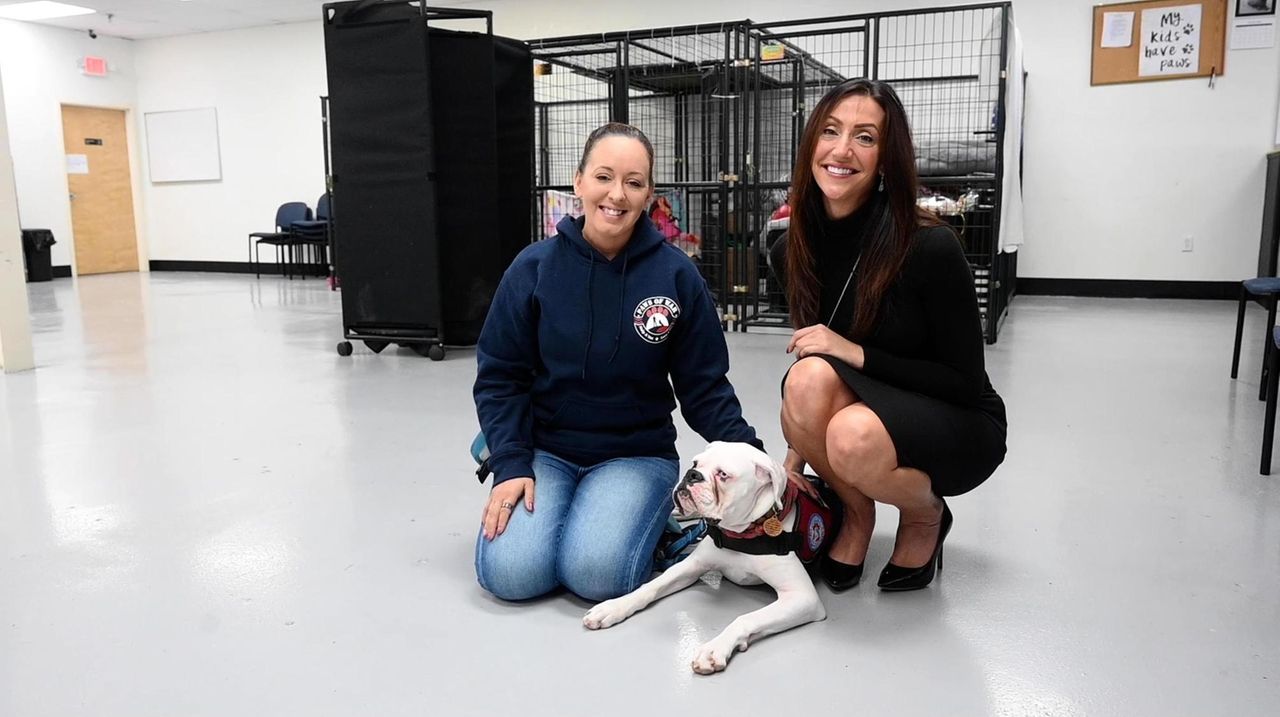 Seven-month-old Hercules looks like a typical puppy, save for one brown eye and the other, a striking blue. But that's where the similarities end for this Baldwin Harbor boxer.

When the 47-pound ball of energy is fully grown, his mission in life will extend far beyond endless treats and napping at the foot of his owner's bed. Hercules, training to be Afghanistan War veteran Ali Bardeguez's service dog, will know the Marine gunnery sergeant's nightmares when he hears them and wake her up.

Bardeguez and Hercules are currently going through approximately 18 months of training through the Nesconset-based, Paws of War. The nonprofit trains and places service dogs with military veterans that suffer from emotional and physical effects of war, its website says.

"Coming home from a long day and then there’s just this very overly happy animal to see you … you have something that will be there and make you feel better," Bardeguez said.

Since 2014, Paws of War has provided service dogs to vets, according to its website. Training the animals is not cheap. The cost can run anywhere from $7,500 to $20,000, said co-founder Robert Misseri.

Nicole Schwartz, a real estate agent with RE/MAX in Smithtown, will cover the cost of the program for Bardeguez and Hercules. Schwartz, who met the pair for the first time Monday morning, said she was inspired to give to the charity because of its mission.

"Our veterans give everything for us, they go out and they serve our country to protect our freedom," she said. "What’s better than giving back to the people who make our country great and keep it great."

A Department of Veterans Affairs study released earlier this year found that both service and emotional support animals help alleviate post-traumatic stress disorder symptoms in veterans, with more significant results in those paired with service dogs. About 11% to 20% of veterans who served in either the Afghan or Iraq wars have PTSD in a given year, according to the VA.

Unlike emotional support animals, public establishments generally must admit trained service dogs with their owners, as per the Americans with Disabilities Act.

Paws of War can teach any breed — from a tiny Pekingese to a burly Rottweiler — the lessons necessary to become a service dog, Misseri said. Veterans often find a community at the Smithtown Boulevard center where they gather in regular classes taught by instructors paid by the nonprofit.

The response from the 400 veterans Paws of War has helped is the clearest example of the program’s success, Misseri said.

"It’s really rewarding when you do get that phone call and the parent or the spouse of a veteran says, 'You have no idea what you have done for this family,' " Misseri said. "That’s when you know, it’s really working."

Bardeguez, who has been in the Marine Corps for 15 years, plans to soon retire and continue her civilian job in Con Edison’s emergency response department.

During training, Bardeguez will be transitioning Evangeline out of the service role as Hercules learns the job one freeze-dried chicken liver treat at a time. The plan is for Evangeline to become a therapy dog for others while she lives out retirement in Bardeguez’s care.

Like their owners, animals still need a sense of purpose when their tour of duty comes to an end.

"It’s the perfect job for her," Bardeguez said of Evangeline. "I don’t want her to completely lose purpose so she’ll have something to do."