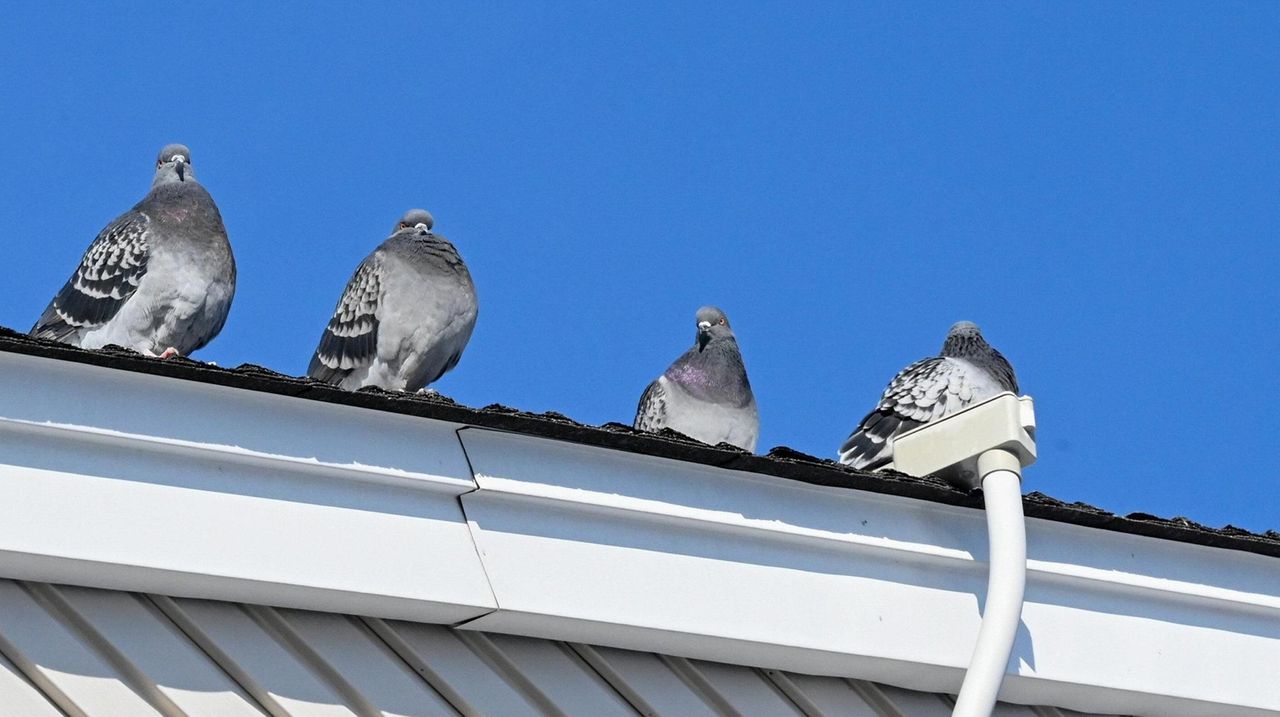 The Town of Babylon has hired a company to remove pigeons from a West Babylon neighborhood after complaints from residents about dozens of the birds ruining their properties. Newsday's Steve Langford has the story. Credit: Howard Schnapp; James Carbone; Photos courtesy of Mike Vittorio

The Town of Babylon has hired a company to remove pigeons from a West Babylon neighborhood after complaints from residents about dozens of the birds ruining their properties.

The town will pay Bye Bye Birdie, of Franklin Square, $1,200 to set up 8 to 10 traps on the roof of a North Babylon Fire Department building on Belmont Avenue. The town also will pay the company $225 each time they retrieve the traps. Town spokesman Dan Schaefer said the town is unaware of what the company does with the birds they capture. Bye Bye Birdie did not respond to requests for comment.

The pigeons have been congregating on roofs and overhead wires at nearby properties for years after one resident, William Thompson, 75, started calling and feeding them. Thompson, an Army veteran who said he has PTSD, kept 50 to 60 pigeons in a coop at his home as therapy birds, he said.

"They are a part of my therapy, I love to watch pigeons," Thompson said. "It’s a calmness."

Thompson received a town permit for a coop in June 2017. Soon neighbors complained that Thompson was letting the birds out for longer than the town code requirement of four hours a day.

"They were out all day," said neighbor Mike Vittorio, 46. "There were over 100 of them. [My property] was infested with pigeons."

Bird droppings were everywhere, he said, causing him to keep his children from playing in the yard. Some birds were killed by circling hawks, their bodies landing on his property, Vittorio said. His gutters had to be replaced because of the pigeons constantly perching on them. Neighbors also had a sheen of bird feces on their skylights, he said, and worried their small pets would be attacked by the hawks.

"The situation was getting a little out of control to the extent that it was interfering with the neighbors’ enjoyment of their property," said town attorney Jerry Guarino.

The town revoked Thompson’s permit in December 2017. Thompson dismantled the coop and said he gave away the pigeons, which he said were worth more than $5,000. Thompson also said he continued to feed "stray birds."

"The birds belong to God," he said. "I put feed in the feeder and whatever birds come, come."

The problems for neighbors continued, but there is nothing in the town code that regulates feeding stray pigeons, Guarino said. Thompson was issued a summons in 2018 for creating a nuisance, but at trial that year in town court he was found not guilty. He has continued to call and feed the birds, neighbors said, the problems escalating.

Now the town is taking a new approach with the traps, the first time Babylon has ever hired a company for this purpose. But Vittorio is doubtful, having unsuccessfully hired a company to set up traps in his own yard.

"I don’t see it happening," he said. The town "needs to stop him from feeding them."

Thompson said he stopped feeding the birds two months ago because he had his driveway resealed and didn’t want bird feces on it.

Vittorio said things have been better but he expects the birds to return in warmer weather.

"And then it will be a free-for-all again," he said.