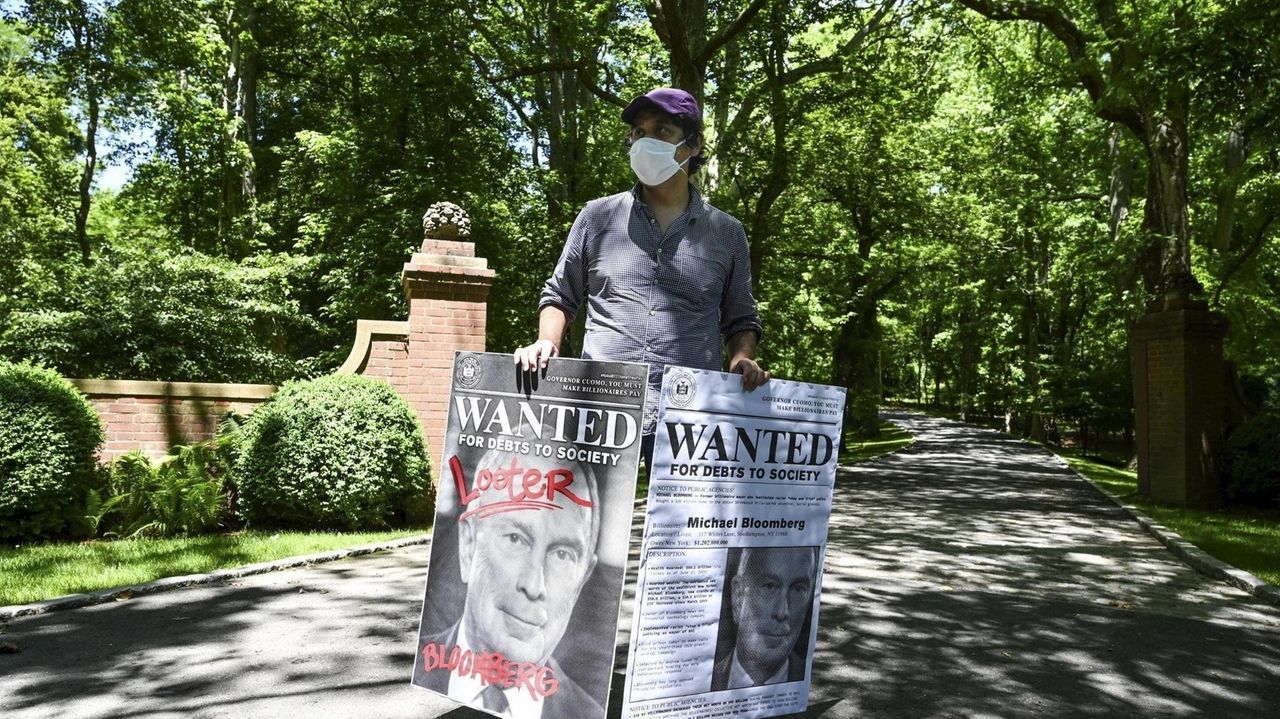 The protesters say they want Gov. Andrew M. Cuomo to raise taxes on the state’s 118 billionaires to help make up for a gaping revenue shortfall. Credit: Newsday / Steve Pfost

The protesters called for Gov. Andrew M. Cuomo to raise taxes on the state’s 118 billionaires to help make up for a gaping revenue shortfall that has left state and local governments reeling from the coronavirus pandemic. They also called for the billionaires and the state to recognize Indigenous land rights, including the Shinnecock Indian Nation's claim to Shinnecock Hills and surrounding territory.

The group, which included Shinnecock Indian Nation members, New York Communities for Change, the New York Taxi Workers Alliance, the Long Island Progressive Coalition and the Poor People’s Campaign LI, cited Forbes figures that estimate billionaires statewide have seen their collective net worth increase by $44.9 billion from March 18 to May 15.

More than 100 people gathered outside Bloomberg's Southampton mansion Wednesday, where they referred to him as a "looter."

"We've been dealing with this since 1492," said Jennifer E. Cuffee-Wilson, a Shinnecock tribe member, who cited Bloomberg's disparaging remarks about the tribe while running for president. "I'm done with your lies, your totally disrespecting us. You have shown us absolutely no respect whatsoever."

Bloomberg's unsuccessful bid for president included comments on a February campaign stop in Oklahoma that drew the ire of Shinnecock Indian Nation members.

“There’s a Native American tribe right near where I live, the Shinnecock Nation,” Bloomberg said in Oklahoma City. “It is just a disaster. There's all sorts of problems."

Margo ThunderBird, of the Shinnecock tribe, which has ancient claims to the land surrounding the 700 -acre reservation, said she had a message for Bloomberg.

Jamell Henderson, an organizer of the protest, said Bloomberg and other billionaires should “pay their fair share.”

“Make billionaires pay, it’s that simple,” he said. “It’s about helping people in need in the middle of this pandemic.”

Attempts to reach Bloomberg for comment Wednesday were unsuccessful.

Numerous Southampton Town police were on the scene for the peaceful protest, which moved on to the home of billionaire Steve Schwarzman in Water Mill just before 2 p.m. There, protesters staged a walk down the hedge-lined road, banging on drums, carrying signs, and singing.

"Just because they have money does not mean they're better than us," said Tanesha Grant, a protester from Manhattan. Danny Hopkins, of the Long Island Progressive Coalition, warned officials that any economic upturn "is not going to be a real recovery unless you structurally change, and that means making billionaires pay their fair share. Otherwise, it will be on the backs of black and brown and indigenous and poor people to bear the brunt of this crisis."

Fritz Jean, one of dozens of New York City cabdrivers in the caravan, said cabbies have suffered from months of lost business and need relief. He called on government to help renegotiate loan terms and bail out the business.

"It's very difficult for us," he said.

A spokesman for Cuomo didn’t immediately respond to a request for comment.