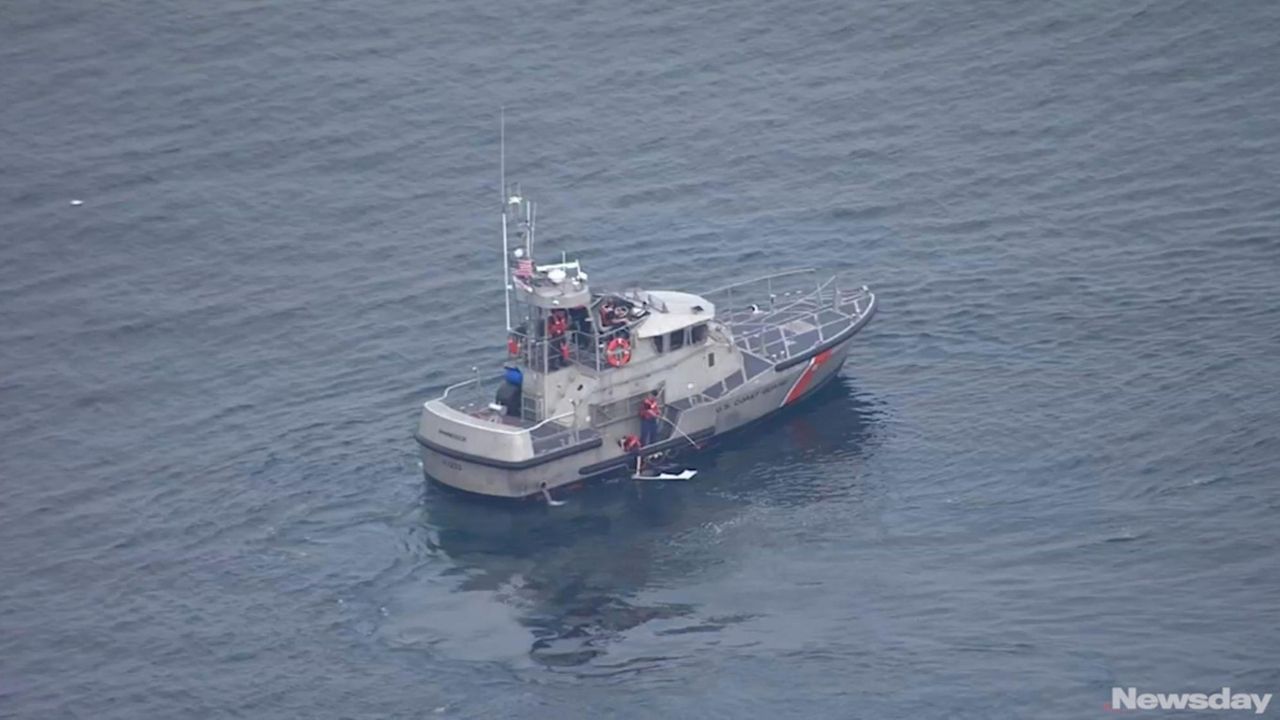 Two bodies were recovered after a small plane carrying four people crashed near Amagansett on Saturday afternoon, the U.S. Coast Guard said. Searchers continued looking for the two remaining passengers in the debris field, about one mile off Indian Wells Beach. In on the search were the Coast Guard, Suffolk police aviation and marine units, a commercial fishing boat, a salvage boat and good Samaritans, Lt. Alaina Fagan said. Credit: News 12 Long Island

Two men died and two people were still missing after a small plane crashed into the Atlantic Ocean near Amagansett on Saturday afternoon, the U.S. Coast Guard said.

The aircraft, a twin-engine Piper PA-31 Navajo, crashed about two miles off shore near Indian Wells Beach at 3:20 p.m., the Federal Aviation Administration said in a statement.

The FAA lost contact with the plane, at 2:33 p.m., and the Coast Guard received a report of a debris field about an hour later, said U.S. Coast Guard spokeswoman Lt. Alaina Fagan.

“We have confirmed there is a downed aircraft, a PA-31 Navajo, with four souls on board,” she said.

The first victim was located by a commercial fishing vessel; the second by a small boat from a Coast Guard cutter, she said.

A flotilla of Coast Guard, Suffolk police, commercial boats and Good Samaritan vessels had searched for the two missing individuals, and a pair of 87-foot patrol boats were continuing the search through the night, Fagan said.

A Coast Guard helicopter based on Cape Cod, and Suffolk’s aviation unit, had also searched around the debris field, which had moved to about one mile off Indian Wells Beach, she said. They returned to base at sunset.

Investigators will develop search patterns based on the sea state, winds and which way the tide is pulling, Fagan said.

Where the plane had originated and its destination were not yet known, and the identities of the pilot and the passengers have not been released.

Both the FAA and the National Transportation Safety Board will determine why the aircraft crashed, officials said.

The crash was the second involving a small plane on Long Island in less than a week.

On Wednesday, a World War II-era military trainer went down in a wooded area of Melville, killing its sole occupant, a member of the Geico Skytypers stunt team that just last weekend had performed at the Bethpage Air Show at Jones Beach.

East Hampton Supervisor Peter Van Scoyoc said, according to preliminary information he received, the twin-engine plane went down during a thunderstorm Saturday.

The precise weather conditions that the plane was flying through are not yet known.

National Weather Service officials said heavy rain and localized storms were reported Saturday afternoon off East Hampton, with some locations reporting up to an inch of rain per hour.

“The initial report I received was that they were going through a squall,” Fagan said.

Conditions appeared to have improved by the time the first of two Coast Guard cutters reached the debris field, with calm winds, Fagan said.

“The search conditions have been good for us today,” she said.

However, Sunday’s forecast is not as promising; there is a small craft advisory in effect from Sunday through Monday morning, Fagan said.

At daybreak, an airplane is slated to fly overhead to try and spot the missing from the air. East Hampton Town Police dive teams will also search for them as well as for the downed plane’s fuselage, Fagan said.

Conditions might not permit smaller boats to join in, Fagan said.

Commercial fisherman Dave Aripotch and his crew were trawling in waters near the crash site when he responded to a notice to mariners to assist in the recover and rescue.

“We hauled back our gear and steamed over,” said Aripotch, of Montauk.

He and his crew recovered a pocketbook, he said.

“I wish we could have got there sooner,” he said.

The crew also saw a piece of the plane’s nose in the water; they kept searching for several hours after the crash.

So did the East Hampton lifeguards, Aripotch said, with several teams of them still searching around 6 p.m.

Fagan could not say whether any of the debris was charred.

The debris field caused by the crash was made up mostly of airplane parts, seats and personal belongings, officials said.

The National Transportation Safety Board is gathering information about the crash but could hold off on sending investigators to the site until the plane is retrieved from the ocean, a spokesman said.

The data it is collecting include the circumstances of the accident, the plane itself and its maintenance history, and the pilot’s record, for example, he said.

“We’re still in the very early phases of the investigation.”

Anyone with information is asked to call the Coast Guard command center at 203-468-4401 or on the radio at VHF-FM marine radio channel-16.

According to the U.S. Coast Guard, the following crews and emergency responders have been involved in the search of the off-shore crash scene: