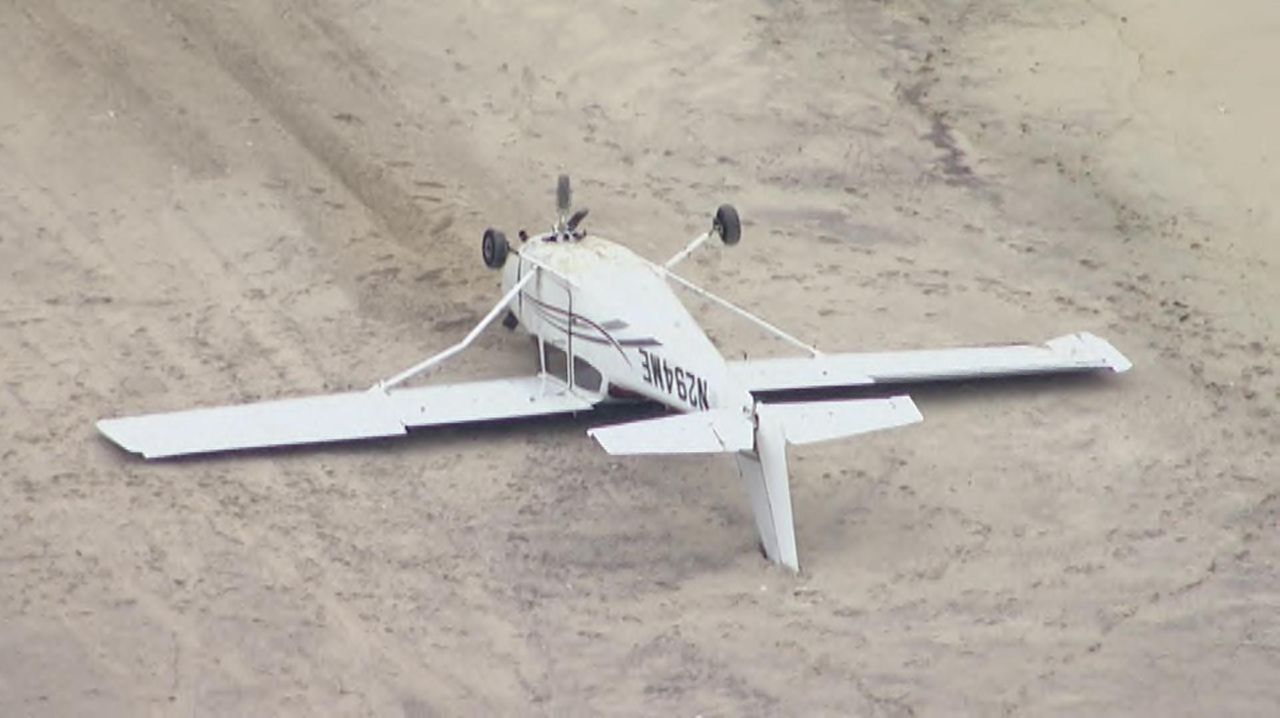 State Park Police said a plane made an emergency landing on the beach at Robert Moses State Park, Field 2, in Babylon on Monday Jan. 29, 2018. There were no reported injuries. Credit: News 12 Long Island; James Carbone

A pilot and two 16-year-old passengers survived unscathed after their small plane made an emergency landing and flipped on the beach at Robert Moses State Park on Monday, officials said.

The pilot was giving the teenagers a flight lesson in the airspace around the park in Babylon when the four-seater Cessna 172 experienced mechanical failure, officials said.

The plane landed along the shoreline and came to a stop upside down on Field 2 about 9:20 a.m.

The aircraft was discovered by the park’s manager while he was on a beach patrol, said George Gorman, deputy regional director of New York State Parks.

“When I got here and saw the plane upside down, I thought ‘thank goodness,’ ” Gorman said. “The pilot landed safely but it could’ve been much worse.”

The park manager reported that the pilot said it was like “slow motion” when the plane flipped, Gorman said.

As the plane taxied on the beach, the moving tires caused the sand to build up and the plane eventually hit the sandy mound, the park official said.

“The combination of the rolling of the plane and the wind in all likelihood flipped the plane,” Gorman said. “ . . . It didn’t smash into the sand and that’s why there weren’t any injuries.

“They opened the door and got out.”

The passengers, a boy and a girl, were taken to Good Samaritan Hospital in West Islip as a precaution because of their ages, officials said.

Hospital spokesman Tim Kelchner said the teens were “perfectly fine” and had been checked out and discharged before 10:30 a.m.

“It’s unbelievable they were able to survive and walk away so easily from that,” Kelchner said.

Officials did not identify the pilot and passengers but a source familiar with the crash confirmed the pilot’s name is Brandon Sax.

The pilot is affiliated with Nassau Flyers, an aviation company based at Republic Airport in East Farmingdale, a representative said. He is 26 and a resident of Port Washington, said his father, Charles Sax.

“I told him, ‘what you did was very heroic, you saved the lives of everyone on the plane including your own’ and he said he just brought the plane down.”

The pilot is affiliated with Nassau Flyers, an aviation company based at Republic Airport in East Farmingdale, a representative said.

Students taking private pilot lessons with Nassau Flyers must be at least 17 years old, but the company also offers other types of flight trainings, according to the flight school’s website. People can earn a student pilot certificate as early as age 16, according to the FAA.

Another flight school at the airport, Hickory Lane Corp., owns the plane and leased it out to Nassau Flyers, CEO Donald Vogel said.

Both Vogel and the Nassau Flyers representative, who declined to give her name, said their companies are fully cooperating in the investigation. They said they could not provide more details.

The airspace over the park is commonly used for recreational flights and flight schools, Gorman said.

The Federal Aviation Administration and State Park Police are investigating the landing.

The plane will be towed from the beach after the FAA concludes its investigation on scene, Gorman said.