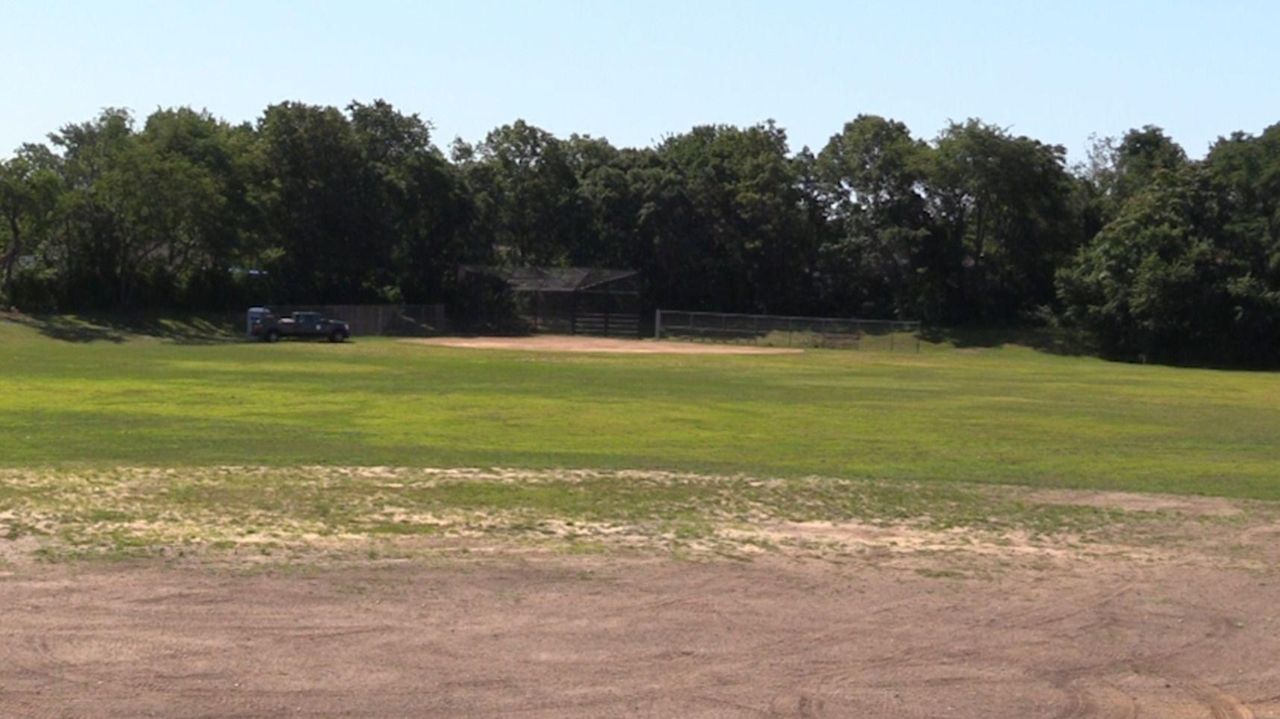 Suffolk County Legis. Monica Martinez (D-Brentwood) and Sammy Gonzalez Jr., a Democrat running for a seat on the majority Republican Islip Town Board this November, were joined by community activists and residents who decried the state of the hamlet’s largest public space, which reopened Monday morning after being shuttered for more than three years following the discovery of 40,000 tons of dumped, contaminated construction debris.

Gonzalez Jr. said he thought Monday’s reopening would be a “victory for Brentwood’s children and youth.” Instead, he said, “We can see that the Town of Islip still doesn’t care about Brentwood. The deplorable condition of this park is proof.”

Standing in front of the future soccer fields, where seeds had just been put down about a week ago, he listed several things he feels still need to be redone or replaced — including the sidewalks, parking lot, playground and lighting for the basketball courts.

“They promised that this would be the best park in the Town of Islip at the end. And look at it, it’s not,” Martinez said at the news conference. “I expect our swing sets to be new; they said they would replace what’s there with a whole new playground. We’re hoping that the basketball courts are done well, the soccer fields are done well and green. Everything is still the same as it was before. The only thing they did was clear out the debris, fill it in and open the gates. There’s nothing new.”

But Islip Parks Commissioner Tom Owens said in a statement: “It is unfortunate that some would politicize the undeniably unfortunate occurrences that have happened in this park by holding a press conference with a campaign sign on the podium, trying to convince people that the park is unsafe.”

With a refurbishing project on the park’s shuttered Olympic-sized pool to start this fall, Owens said it would be “shortsighted and fiscally irresponsible” to repave the parking lot before construction is complete, and that redoing the lot is planned for a later date.

“Upon exhausting this avenue, the Town will do whatever it takes to install a new playground with a rubber surface,” Owens said. Bathroom facility upgrades will also be explored as the “multiyear and -phase redevelopment” of the park continues, Owens said.

Keyshawn Grenville, who was celebrating the start of his 12th birthday at the park Thursday by playing basketball with his dad, Gaston Grenville, 57, said he’s been waiting years for the park to reopen.

They noted that while the playground and basketball courts “are the same as before” and some work still needs to be done, they are “excited” to have the recreation space so close to their Brentwood home opened again.

“We used to come to the park almost every day,” Keyshawn said. “Now we can enjoy it again. I just really hope they open the pool up soon.”