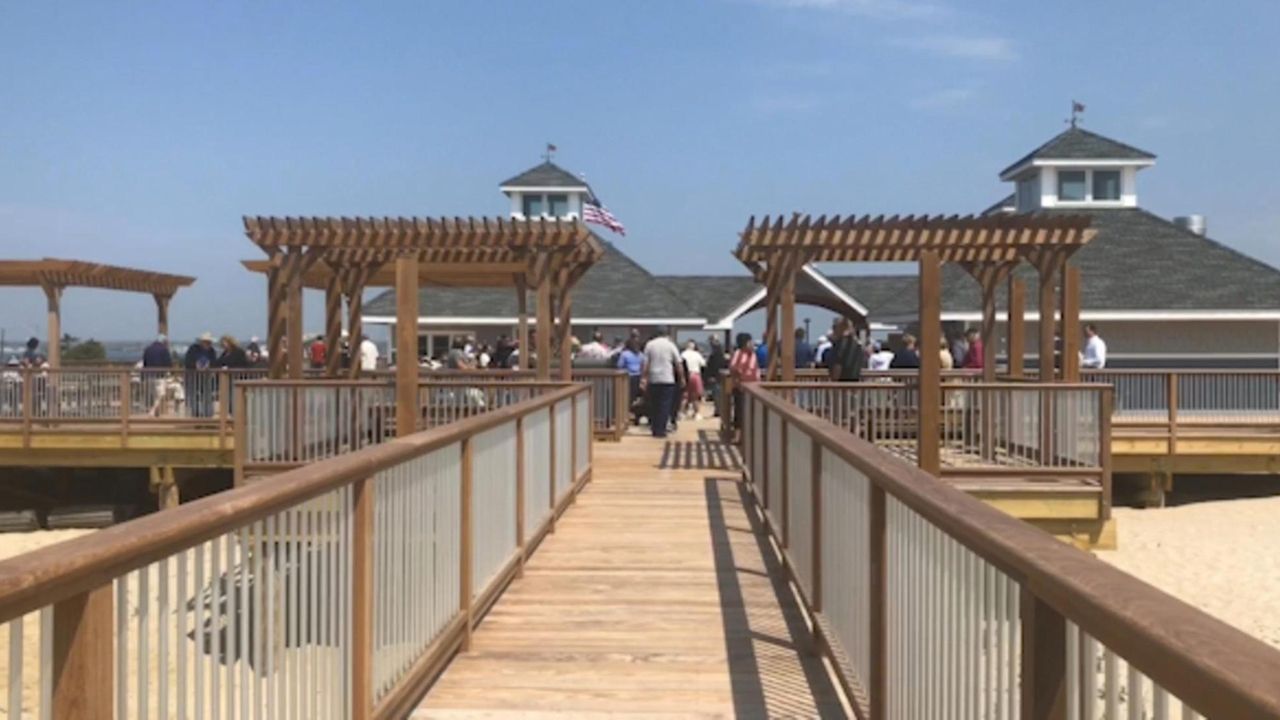 An expanded deck with ipe wood, new showers and electric-vehicle charging stations will greet visitors this summer to Southampton Town’s most popular beach.

Town officials on Monday unveiled the overhauled beach pavilion at Ponquogue Beach in Hampton Bays and were met with applause by community members, many of whom said they have been coming to the beach for decades. Work on the $3.35 million project began with a groundbreaking in October and is expected to finish before Memorial Day weekend.

Town Supervisor Jay Schneiderman noted that while Coopers Beach in Southampton is perennially ranked by Dr. Stephen Leatherman, AKA Dr. Beach, as one of America’s best, Ponquogue offers the better experience. Both have long swaths of fine sand and glistening blue-green waves, but Schneiderman noted that Hampton Bays’ shoreline lacks the oceanfront mansions of its neighbor to the east.

“This is the best beach in America right here,” he said. “You can walk for miles without seeing a single house on the beach.”

“It’s a complete, total renovation down to the studs and deck boards,” said town parks director Kristen Doulos. “While some work has been done throughout the years, there haven’t been any major improvements.”

Ponquogue is the most-visited town beach, attracting 85,000 visitors in 2018, Doulos said. Nearby Tiana Beach, about 2 miles west in East Quogue, received about 61,000 visitors, she said. About a quarter of guests purchase $25 daily passes, while the rest are mainly town residents with season stickers.

The budget grew to $3.1 million when contracts were awarded in September, and the town board agreed to borrow $1.2 million to cover that additional cost. The construction contracts were awarded to three contractors: $2.94 million to Construction Consultants/LI of Riverhead for the general construction; $91,000 to Plumbwell Services of Sea Cliff and Farmingdale for plumbing; and $114,275 to NY Trenchless of East Moriches for electrical work.

The budget was increased again in April by $225,000 to fund repairs to the structure’s undercarriage, an amount drawn from a town surplus fund.

J. Mill Management, whose CEO is Larry Hoffman, the owner of Docker’s Waterside Marina and Restaurant in East Quogue, will operate the concession stand under a $40,000-per-year contract with the town.

The town sought input from hundreds of community members on how best to overhaul the structure, built in 1966. Residents asked that the pavilion not feature a full restaurant, instead opting for a snack bar, and also requested that the facility’s footprint not be expanded.

“They executed it the way we asked them to,” said Ernie Trillo of Hampton Bays, who attended Monday’s ribbon-cutting. “I think it’s fabulous. They used excellent materials, and the workmanship is beautiful.”

WHAT TO KNOW BEFORE YOU GO