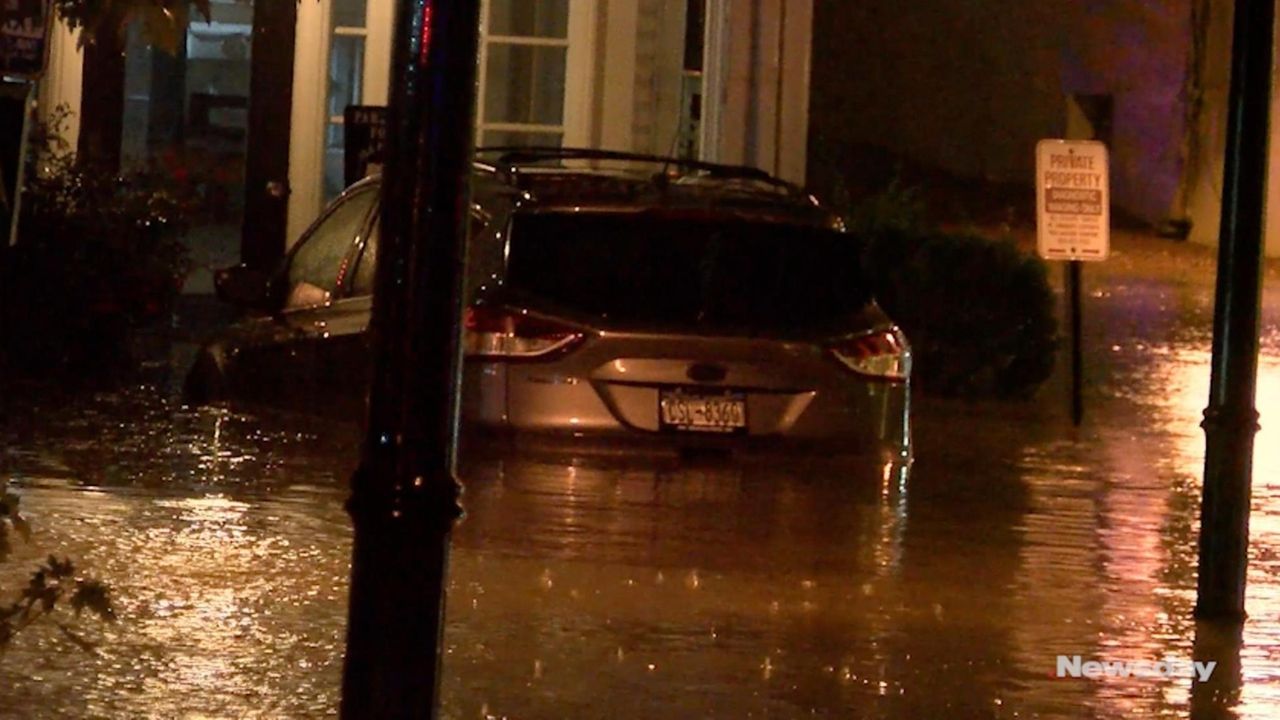 Torrential rainstorms caused problems in Port Jefferson Tuesday night, as the owner of Old Fields restaurant, David Tunney, said his entire dining area had been flooded, and customers were trapped in the bar area of the eatery.  Credit: Stringer News Service

Flooding from heavy rain besieged Port Jefferson Tuesday night, forcing businesses to be evacuated, drivers to abandon their cars and firefighters to call for reinforcements when their firehouse became waterlogged, authorities said.

More than 40 patrons at Theatre Three on Main Street retreated to higher ground when the ground floor, where a cafe and bar are located, was flooded at about 8:10 p.m., Suffolk police and village officials said. They were all evacuated, authorities said.

"Hearing that the water was above the bar at Theatre Three, approximately   three and a half to four feet . . . that's like above your kitchen counter," village Mayor Margot Garant said. "That's crazy."

She said the village is no stranger to floods — it was once called Drowned Meadow — but on Tuesday night, the rain came down so fast that the water could not drain into the harbor so the streets started filling up like they were a bowl.

"Thankfully, it wasn't high tide," said Garant, who has been mayor for 10 years. "I've been here doing this many, many years. I've never seen anything quite like this."

Conor Russell, 25, of Port Jefferson Village, was in his apartment off Main Street when he noticed police blocking off the road.

“I looked out the window and saw a river,” he said.

Water levels had risen to the seam of his 2004 Honda Sonata. While he said his car sustained some damage, he feared the worst for others.

“Some of the cars are definitely ruined,” he said, adding he saw water levels elsewhere in the village reach the door of a SUV.

On East Broadway, one of several abandoned cars, a Mercedes, caught on fire, the mayor said.

"It's just sitting there in the middle of the lake in flames," Garant said.

Motorists in half a dozen or so cars had to be rescued, Garant said, and on her way home, she saw more cars abandoned on the roads.

Streets were blocked off as authorities tried to prevent drivers from getting into deep waters.

“This went on for two hours,” said Ruangsirin, 21, of Port Jefferson Village.

People from at least two restaurants, Ruvo East and Old Fields, both on Wynn Lane, were also evacuated, authorities said.

A block south on Maple Place, the Port Jefferson firehouse, situated in a sort of dip in the village, was flooded and equipment was floating in the water, the mayor said. Coram and Terryville firefighters came to the rescue to help evacuate people and rescue motorists, she said.

"They're still dealing with substantial water," Garant said of conditions at the local firehouse. "Their equipment is all tossed around. Their radios are out."

She called the response "great team work," from local code enforcement officers to police. No injuries were reported, the mayor said.

Garant, who has lived in the village since she was 9, said she and other local officials have never encountered flash flooding of such proportions. But with weather emergencies on the rise, Garant said she plans to meet with local, county and state officials to better prepare for emergencies.

“It’s all about the details,” she said.