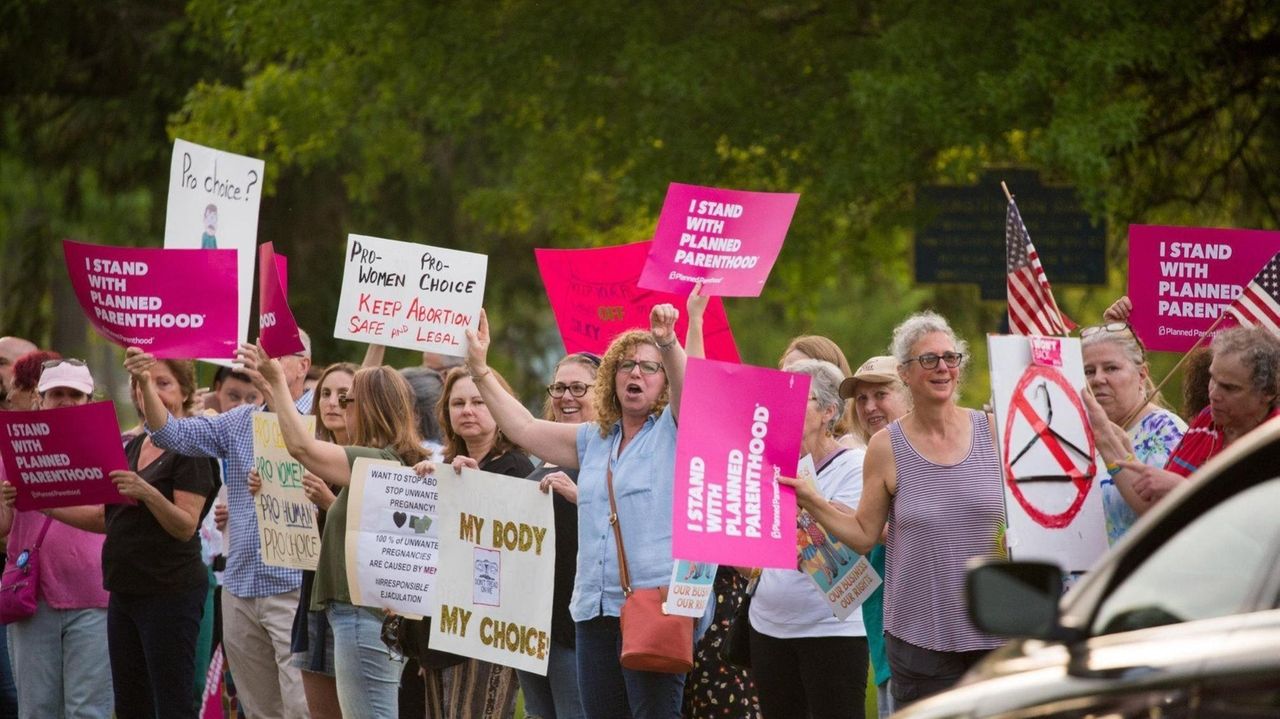 A rally was held in Huntington on Monday to support women's reproductive rights in response to anti-abortion laws being passed around the country. Credit: Barry Sloan

In Port Jefferson on Monday night, they carried coat hangers to protest the wave of abortion bans in conservative states. In Huntington, about 100 women and men chanted, “My body, my choice!”

“It’s not a political issue, it’s a women’s rights issue,” said Dr. Eve Krief, 50, a Centerport pediatrician who organized the Huntington event, billed as a stop-the-bans rally. The rallies came days after Alabama Gov. Kay Ivey approved a law making performing an abortion a felony in nearly all cases unless necessary for the mother’s health, with no exception for rape or incest.

Governors in Kentucky, Mississippi, Ohio and Georgia have approved bans on abortion once a heartbeat is detected, legislation intended to challenge Roe v. Wade, the 1973 Supreme Court decision that legalized abortion nationwide.

New York has moved in the opposite direction, with Gov. Andrew M. Cuomo signing in January a law that ensures the right to abortion in New York. That law also permits late-term abortions to preserve a mother’s health, permits some medical professionals who are not doctors to provide nonsurgical abortion care, and shifts abortion law from state penal code to health code.

In Port Jefferson, a group of about 25 gathered outside the Chamber of Commerce railway car on Nesconset Highway. Harriet Dembe, 68, a retired registered dietitian from St. James, said the coat hanger she carried was a reminder of pre-Roe times.

“Abortions happened even before they were legal,” she said, adding that the procedure was carried out in conditions that were “unsanitary, dangerous and expensive. We don’t want to go back to that.”

The Huntington crowd gathered on a corner near Town Hall, where Krief said protesters have assembled for  various causes in recent years. Abby G. Burton, 69, a substitute teacher from Plainview, said tightening abortion restrictions was a matter of social justice, no different than it was a generation ago. Women of means had options, while “women who did not have access, who did not have money, were forced into back alleys,” Burton said.

Their chant, “my body, my choice” was heartfelt, said Burton and others at the rally. The restrictions were an attempt to “dictate” and “infringe on someone else’s life,” she said.

The Republican governor of Alabama notwithstanding, Melissa Savoca, 28, of Bay Shore, attending the Huntington rally, said most of the anti-abortion leaders are men,

“Men shouldn’t tell women what to do with their bodies,” she said. After reading about the string of recent restrictions, she said, “I’m terrified.”

The women’s health group Planned Parenthood and its partners have scheduled rallies Tuesday at state capitols and courthouses across the country.