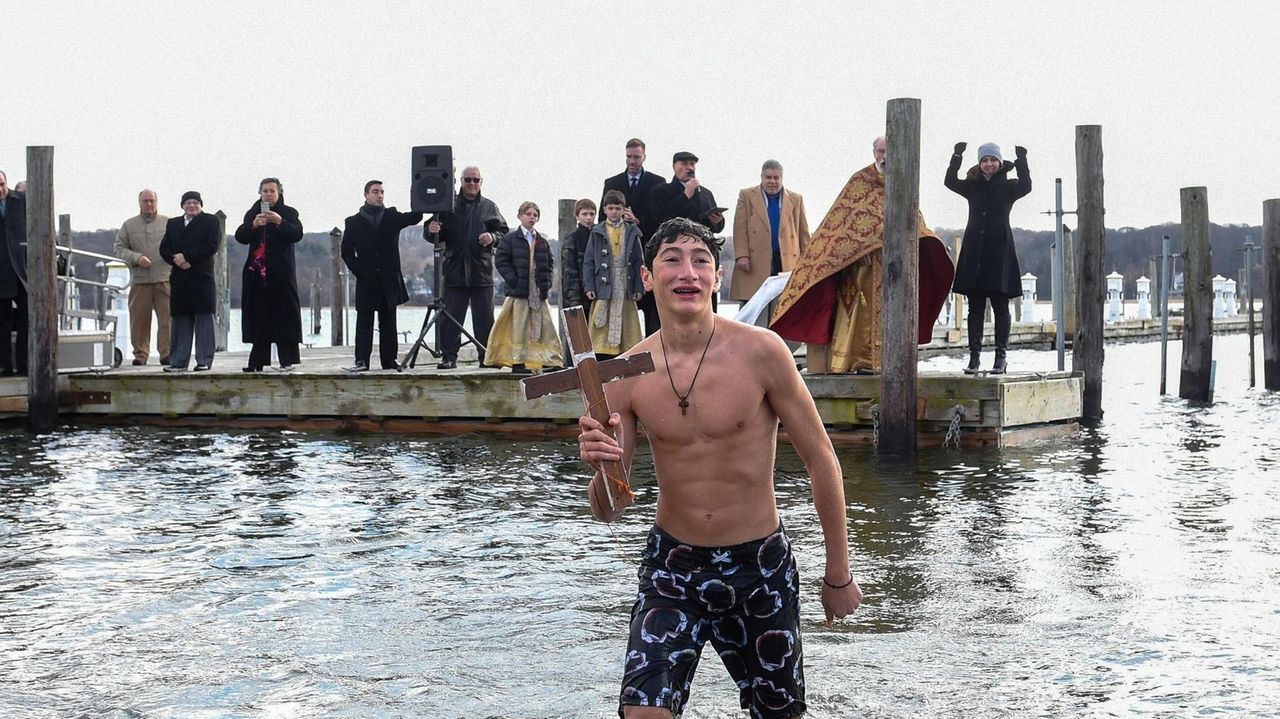 Father Demetrius Calogredes of the Greek Orthodox Church of the Assumption in Port Jefferson on Sunday described the Feast of the Epiphany celebration, which includes churchgoers diving for a wooden cross at Cedar Beach in Mount Sinai. Credit: Newsday / Vera Chinese

Retrieving a wooden cross from the water during the Greek Orthodox Epiphany celebration is considered a blessing and good luck for the year ahead, but Nick Dimitratos, 14, had a much simpler reason for diving into the chilly waters off Cedar Beach on Sunday.

“It looked kind of fun,” Dimitratos said at the Greek Orthodox Church of the Assumption’s annual event.

Members of the Port Jefferson church gathered along the shore in Mount Sinai as Father Demetrios Calogredes read from a jeweled Gospel and sang holiday songs. Dimitratos and three other teen boys waited on the banks of Mount Sinai Harbor for Calogredes to toss the wooden cross off a dock, a yearly tradition that has been carried out there since the church’s founding in 1959.

Wearing only swim shorts, the boys swam furiously toward the cross, but 14-year-old George Franks emerged victorious. A first-time participant, Franks, of Mount Sinai, said he chose not to ask the water temperature before his winter swim.

The teens were ushered into a Port Jefferson emergency services ambulance for a checkup and a warmup immediately after and Dimatratos’ father Spiros wrapped his son in a fluffy blanket. Emergency workers, who estimated the water at about 50 degrees, gave the boys a clean bill of health.

The event, also known as the Theophany of Our Lord and Saviour Jesus Christ and meant to celebrate the baptism of Jesus in the Jordan River, is held every year on Jan. 6. It marks the declaration of Jesus Christ as humankind’s savior.

The day begins with Mass at the church, followed by the harbor dive and a feast, Calogredes said. The cross is tethered with a long line of red string to prevent the holy object from being carried to sea in the event no one can recover it.

The dive is open to all, but participants are primarily teenage boys and girls, the priest said.

With air temperatures in the mid-40s, Calogredes said this year’s divers fared better than last. That year the wind chill made the temperature feel like 10 degrees below zero and the event was postponed, the priest said.

“They’re very brave,” Calogredes said of the teens. “And very resilient too.”