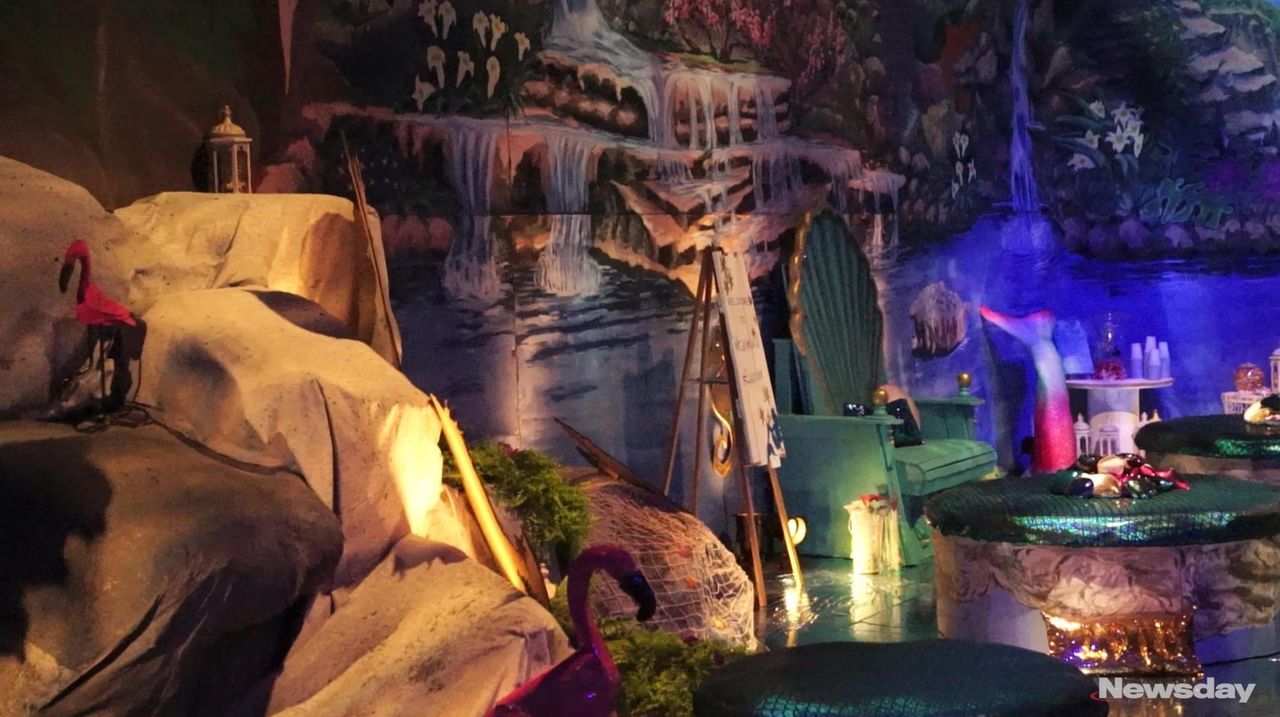 Earl L. Vandermeulen High School students made a grand entrance to their Neverland prom on Monday.  Credit: Jennifer A. Uihlein

John Worrell may not have been dressed up for prom night — he was sporting an electric blue “Extreme Makeover: Home Edition” T-shirt, light-wash jeans and a cap that read, “I’m so fly, I never land.”

But that evening, it was safe to say that Worrell was prom king.

It was his vision all along: “A Night in Neverland” as the theme for Monday’s Earl L. Vandermeulen High School prom, which has taken place on the Port Jefferson campus since 1957. The gymnasium was transformed by a team of volunteers — comprising mostly parents of students and members of the community — into an unrecognizable playground full of intricately painted scenery, props and sculptures begging to be used in photos.

With “Peter Pan” as the theme this year, the team got to work in September. But for Worrell, the planning began last summer, when he cleaned out his laptop to make room for “thousands and thousands” of “Peter Pan” photos.

Worrell has a background in performance: He is a trained dancer and owns Amy Tyler School of Dance and Harbor Ballet Theater in Port Jefferson with his wife, Amy Tyler. Worrell also creates the sets for the high school’s musical productions. His son Ryan is a graduating senior, which is why Worrell wanted to take on such a big role in this year’s prom.

Parents are welcome to bring their prom ideas to the table every year, so he pitched his concept to his fellow volunteers, and . . .

“Mine got picked,” he said. “I was very excited and very scared at the same time. From there, we break down into meetings with groups. So my concept was taken, but then each group of parents will take a section.”

Each section of the prom represented a different setting from the story of “Peter Pan.” The exterior of the school served as the Darling residence. A 20-foot moon lit from behind featured silhouettes of Peter, Wendy, Michael and John flying to Neverland. Their presence offered a clue to approaching prom-goers, from whom the theme is kept a secret until the night of the event.

Walking into the lobby, students "flew" over London and escaped to the land where they’ll never grow up. Deep blue backdrops with tiny twinkling lights and lanterns shaped like stars surrounded the space, and sparkly cursive letters against the wall provided directions: “Second Star to the right and straight on till morning.”

“That’s where the fantasy starts,” Worrell said. “The fantasy carries you once you go to the next entrance; now you’re in Neverland. That was the idea: to keep everything moving, so that as soon as they come in, they’re taken where they need to go.”

The gymnasium was full of references to the 1911 J.M. Barrie classic novel and gave a nod to the 1953 Walt Disney film adaptation. The dance floor was surrounded by a 54-foot pirate ship. Mermaid Lagoon was to the right; Lost Boys Club on the left. Wendy’s hut, Hangman’s Tree and Tiger Lily’s tepee made appearances as well, with assorted activities and goodies awaiting the students in each section.

The seating area was in the far rear of the gym, tucked away behind gray cavelike scenery. Through the stone depictions — a grand dining room, dripping with flowers and jewels.

Even the bathrooms were transformed: the girls restroom was fairy-themed, covered in flowers and glitter, and the boys bathroom was filled with pirate decorations, notably featuring a huge crocodile sculpture with its mouth open wide surrounding one of the toilets.

It’s important to note that the volunteers annually pull off the final construction of this setup in one weekend.

“The community just completely comes out,” Worrell said. “If you come in on Saturday morning at 7 o’clock, there will be 200 people here just putting it together. It’s really amazing. It’s a lot of work.”

The planning leading up to this weekend is year-round. In the fall, the designs were finalized by Worrell and his friend, California-based artist Daniel Nyiri. After the scenes were sketched out, the painting process began in December, Worrell said.

The carpenters on the team also met with the designers to let them know “if it’s possible or not possible” to execute each element of their vision, said volunteer John Poulianos. He has been assisting with the prom construction since 1999.

“This year we have a lot of 3-D effects inside the gym,” Poulianos said. “We’ve got a lot going on; multiple layered scenes. It’s the first time we’ve done anything like that.”

The months leading up to prom include sculpting, building, logistical planning, organizing keepsakes for the students, and making any additional purchases, such as furniture to represent the Darling living room. Then comes the big weekend, when the volunteers take over the school and bring Neverland to life.

“Everybody gets involved,” said Worrell, “and everybody brings something very special to the table.”

Inside the gymnasium on the Saturday before prom, about 70 parents flitted around Vandermeulen High School carrying staple guns, moving cardboard scenery, hopping on cherry pickers, and drilling and hammering every screw and nail in sight. They spent all of Saturday and Sunday putting everything together in front of the school, inside the gymnasium, throughout the hallways and in the bathrooms.

Volunteers mostly came from the Port Jefferson area, but some traveled much farther to support the community, like Kathy Verdi. She and her husband, Tom, grew up on Long Island but live in North Carolina. Their goddaughter, Anna, is a graduating senior, so when they traveled to Long Island for her graduation on last Friday, they stayed to help with prom.

Kathy assisted with stapling and carrying the cardboard throughout the gym. As for Tom, well, Kathy said she hadn’t seen him in hours. They arrived at 7 a.m. on Saturday to work.

She added that the setup had been “exciting” to see in real time.

“It’s absolutely amazing,” she said. “We saw pictures last year . . . but it’s amazing to see it in person and to see how it gets done. It’s a big difference than Facebook pictures.”

The weekend of work was all worth it for the volunteers, as they welcomed the community into the school to walk around and take photos from 4 to 6 p.m. on Monday before the prom started. Then, around 7:45 p.m., the students began arriving in horse-drawn carriages, sports cars, limousines and fire trucks. They walked along a red carpet to enter the school, and once inside, they were in Neverland.

Gasps, dropped jaws, squeals of excitement and some tears were the initial reactions of the student body upon seeing their gymnasium transformed into a fairy tale. They excitedly snapped photos of each other posing by Mermaid Lagoon and the starry London backdrops all night long, and stopped to grab some treats from the “Second Star Candy Store,” a candy bar set up outside the main event.

Senior Max Okst was one of the only students able to work on the prom, helming the lighting design. He plans to study theater design and technology this fall at Ithaca College. He said his peers, upon seeing their school overhauled by their parents, were “astonished” and “completely baffled.”

“It’s so amazing what they can do,” Okst said. “These parents are coming from all different places and different careers, and seeing them put together a creative masterpiece in the gym is fantastic thing.”

As for next year, Worrell said he would like to stay involved, noting that one of his dream jobs would be assisting with a science-fiction themed prom.

“It takes a village,” he said. “These kids are the life of our community. Many of them will come back [to volunteer]. It just shows them how much we love them and how much the community as a whole cares about everybody, and how we can work together.”