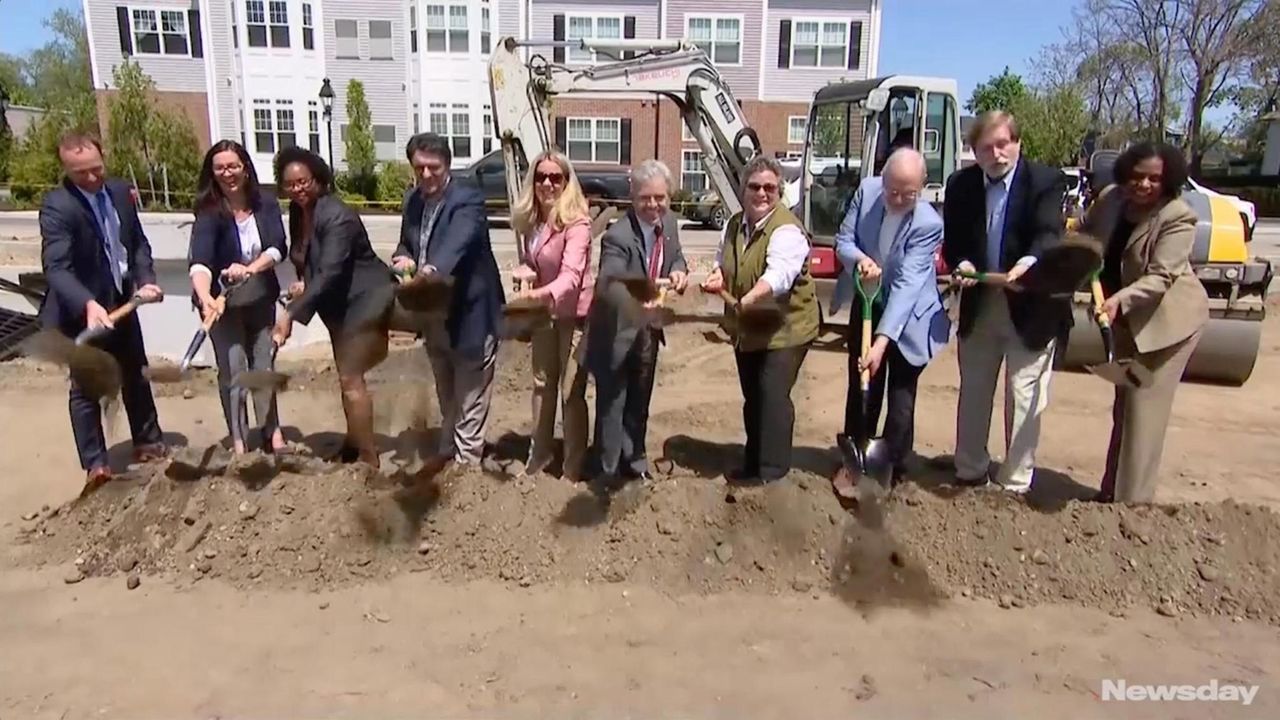 Suffolk County officials broke ground on Wednesday for a new parking lot between Linden Place and the Long Island Rail Road tracks in Port Jefferson dubbed the "Uptown Funk" project. The new lot, which is still under construction and will accommodate 74 parking spaces, is part of Port Jefferson Village's ongoing efforts to revitalize the Upper Port area near the train station.  Credit: News 12 Long Island

Suffolk County and Port Jefferson officials drove shovels into the ground Wednesday to celebrate construction of a parking lot that they hope will spark the revitalization of the village’s struggling Upper Port neighborhood.

Adding the 74-space parking field near the Long Island Rail Road’s Port Jefferson stop is a key piece of a larger puzzle that includes plans for new housing, shops and cafes aimed at attracting younger residents to a business district that now is dotted with empty storefronts, officials said.

“I need to get a new vibe up here,” Garant said.

Village and Brookhaven Town officials joined County Executive Steve Bellone in a groundbreaking ceremony for the $800,000 parking lot on Linden Place. Construction began last month and is expected to be completed in June.

The property formerly had been the site of an electrical supply warehouse that shut down many years ago, Garant said.

The lot, funded in part by a $250,000 county “Jump Start” grant, will include new lighting, improved drainage and sidewalks. Officials said the project would make it easier for pedestrians to walk from homes and stores to the train station.

Port Jefferson officials three years ago approved a new master plan designed to encourage development of new shops and apartments in Upper Port, which has lagged behind the village’s vibrant harborside downtown.

Bellone said Upper Port’s redevelopment was a “transformative” project that would benefit LIRR commuters and expand the village’s tax base while improving the community’s appeal to potential residents.

“It’s a cool place to be, and becoming cooler every day because of the great work going on here,” he said.

Most of the new parking will be open to LIRR commuters and village and non-village residents, officials said. Garant said 19 spaces will be reserved for visitors to The Hills, a 72-unit apartment complex that opened last year at Linden Place and Texaco Avenue near the parking lot.

Village officials plan to add a new road, Station Street, to divert traffic away from a parking lot at the train station. The Metropolitan Transportation Authority has announced a $1 million plan to upgrade the LIRR lot.

Garant said shop owners would benefit from an influx of new residents.

“We need feet on the street,” she said. “We need new apartment dwellers.”