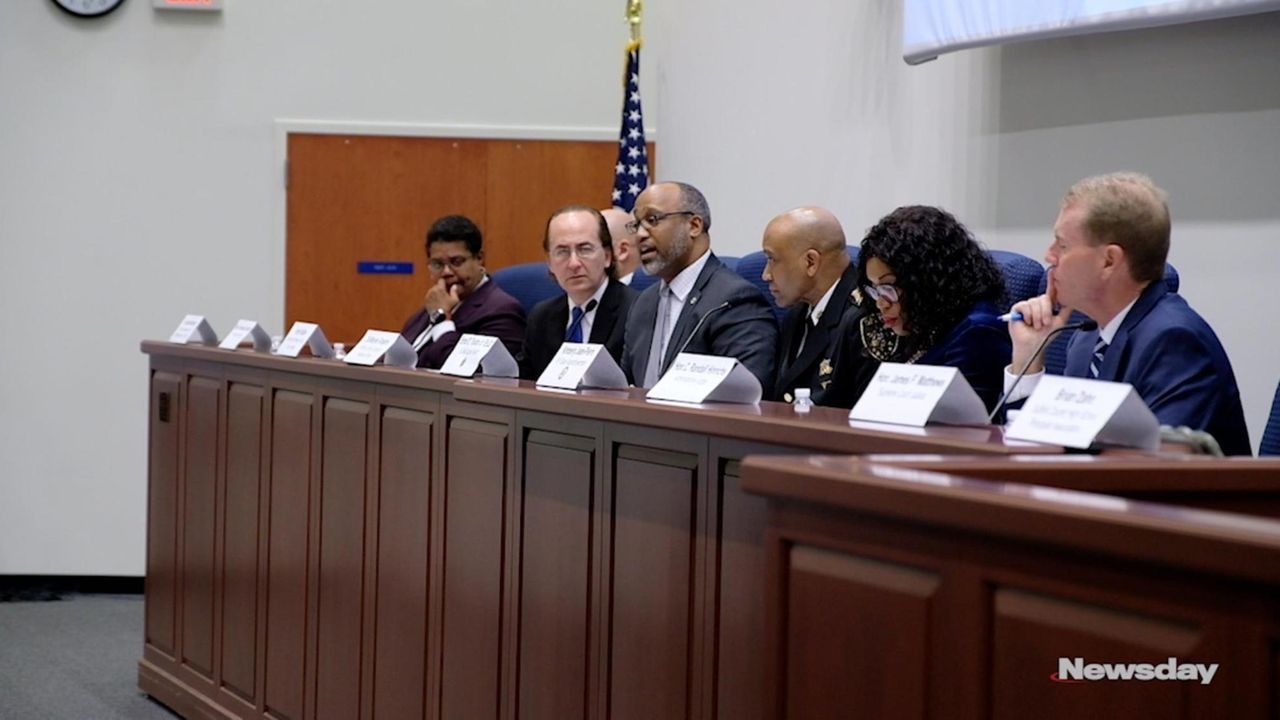 At a forum sponsored by Suffolk County Sheriff Errol Toulon and Assemb. Kimberly Jean-Pierre (D-Babylon) at Touro Law Center in Central Islip Friday, experts debated how to intervene in the lives of young people whose paths are leading to prison.   Credit: Jeff Bachner

At 16, Mariyah Zeigler was convicted of first-degree robbery and spent 5 years in an upstate prison for women, the result of neglect at home, acting out in school, and committing crime on the streets of her native Troy, she said Friday at a forum at Touro Law Center in Central Islip.

Now 23, Zeigler, a research assistant for state Assemb. Kimberly Jean-Pierre (D-Babylon), said the correctional facility was at once a kind of rock bottom and a cushion that turned her life around.

“I honestly know that prison saved me,” Zeigler said before hundreds of criminal justice reformers, law enforcement officials, judges, social services providers and formerly incarcerated people at an event where experts debated how to intervene and cut off wayward young people’s paths into prison.

“Deconstructing the Prison Pipeline,” a forum sponsored by Suffolk County Sheriff Errol Toulon and Jean-Pierre, drew experts and laypeople to a wide-ranging debate on making the lives of young people better — from their homes to their schools and community — so that they stay clear of prisons which, for some like Zeigler, offered seemingly better conditions than home.

“I had three hot meals and a bed every night,” Zeigler said, sparking gasps in the audience when asked by Touro Law Center Dean Harry Ballan what prison provided, that her home didn’t. “The basic things.”

Zeigler said after her parents split, she was shuttled constantly between their homes. Her grades suffered, and she had behavioral problems in school.

Her testimony was one of dozens offered at the event that included the expertise of veteran social workers and advocates such as Rebecca Sanin, the president/CEO of the Health and Welfare Council of Long Island who chided a system labeling kids “at-risk” within a structure that is all too punitive to children who are often products of acute poverty and family breakdown.

It’s a cry for help, she said, when children act out.

“Behavior is a language,” she said, drawing applause as Zeigler did at the end of her testimony. “Children often act out or misbehave, but it’s a communication tool to tell you they are not OK. And what do we do as a society? We punish.”

Sanin cited the disparities in health and life outcomes for people living in adjacent ZIP codes as evidence that income is an existential determinant, while state Assistant Attorney General Ajay Saini raised the issues of race and ethnicity.

He revealed the results of a 2014 study of suspension in Albany and Syracuse schools that found black and Latino students were sanctioned at “two to three times the rate of their white peers.”

Suffolk’s own criminal justice officials both questioned the people who testified and offered testimony, such as Acting State Supreme Court Justice Fernando Camacho, who called for the creation of “safe spaces” for children to receive “wraparound” services with counselors, recreational activities and job training.

“Suffolk County must respond to this juvenile justice crisis,” he said. “Deconstructing the prison pipeline will require an aggressive and unified community response.”

The event was the outgrowth of the Deconstructing the Prison Pipeline Task Force, which was created by Toulon last fall and co-chaired by him and Jean-Pierre. It harnesses the talents of a host of stakeholders in the county’s legal and social services apparatus to seek solutions to juvenile crime.

“When it comes to issues like crime and incarceration, people are often fearful of change,” Toulon said. “There’s a fear that somehow reform means being soft on crime. This cannot be farther from the truth. I know from experience that most young people end up in jail and prison largely because of the circumstances that shaped their lives, like poverty, trauma, a lack of mentors, instability in their homes and, in some cases, by outdated, misguided and overly punitive laws and policies.”