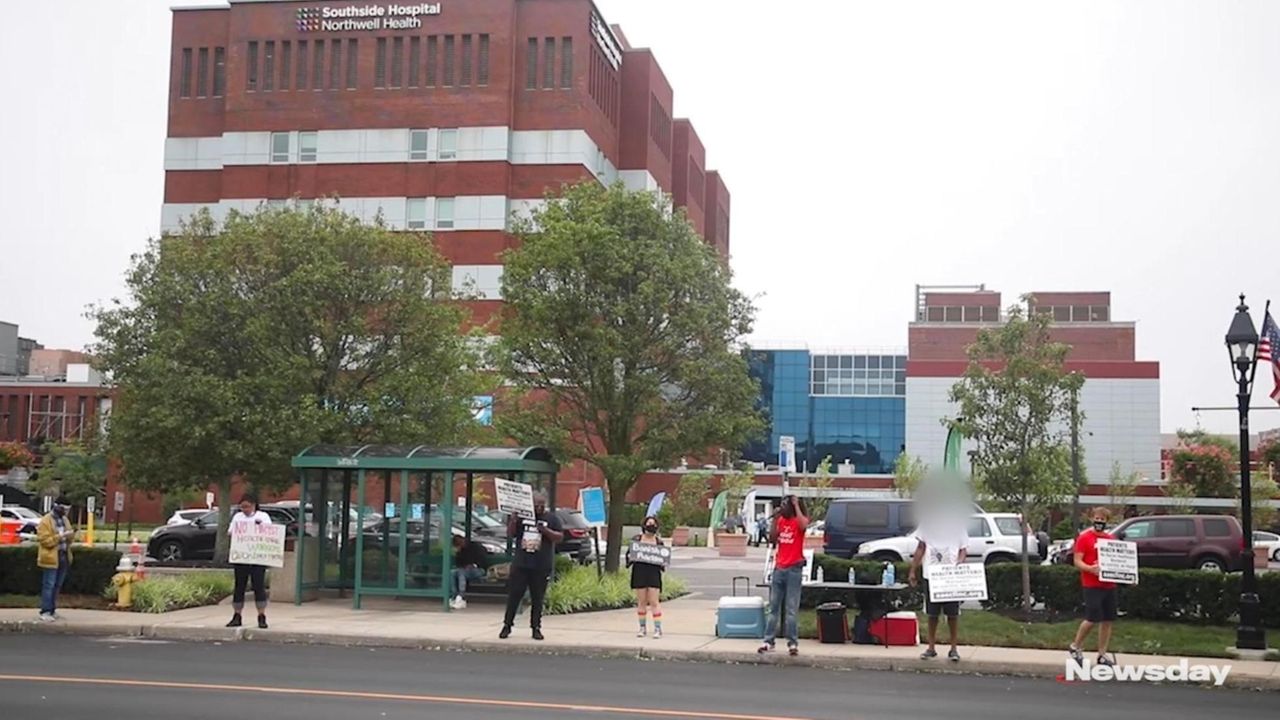 Protesters gathered outside Southside Hospital in Bay Shore on Saturday, rallying against what they say are racial inequalities toward both minority health care workers and minority patients. Newsday's Steve Langford has the story. Credit: Newsday / Shelby Knowles

Protests against police brutality continued for the seventh week Saturday, and some demonstrators called for an end to health care inequality and racial discrimination in the workplace following two incidents where hospital staff allegedly made racist comments.

Roughly 10 protesters gathered outside Southside Hospital in Bay Shore on Saturday to ask hospital officials to address their concerns of racial discrimination and inequality in the health care system.

Among them was Kurt Kronemberg, 60, who said a comment by a Southside Hospital employee was unacceptable.

“I’ve been an activist for 30 years, and I am so proud of Long Island protesting now,” said Kronemberg of Bay Shore. “When I saw this happening, I knew I had to be a part of it because it matters to me, too.”

Saturday’s protest was a continuation of a June 27 rally, held shortly after the online incident became public. That rally drew about 30 people to the hospital.

“Racist behavior, on the part of any of the hospital's employees, will not be tolerated whether inside our facilities or in the community,” Winthrop spokeswoman Anne Kazel-Wilcox said in a statement. “Such behavior is inconsistent with our values.”

Bobby Smith, executive director of the African-American Educational & Cultural Festival, a Riverhead-based Black advocacy group, said his organization immediately contacted the hospital when they heard about this week's incident.

“When I heard about that situation, I felt terrible,” said Smith, who also works as a per diem employee at Southside. “It was another example of another racist worker in health care. I was struck, I was bothered.”

Smith said Southside Hospital officials had initially agreed to sit down with him to discuss his concerns about the social media incident, but that meeting never happened and communication has since stopped.

Northwell Health spokeswoman Alexandra Zendrian said in a statement Saturday that Northwell had been in touch with Smith’s group.

“Northwell condemns and does not tolerate any form of hate, racism, discrimination and harassment,” Zendrian said. “We want to emphasize that all Northwell institutions provide the same high-quality health care to all patients regardless of their race, ethnicity, religion, gender identity, gender expression, sexual orientation or any other personal facet.”

Smith said he will continue to lead protests every week until hospital officials have a sit-down with him.

During Saturday's peaceful protest, most drivers honked and expressed support. Some yelled: “I’m with you!” A handful of drivers, however, countered protesters’ chants of “Black Lives Matter!” by shouting “All Lives Matter!”

In Copiague, about two dozen protesters sang together and marched in the streets, chanting “No Justice, No Peace” and “Say His Name, George Floyd.”

With a bullhorn in hand, protester Vincent Doe, of Lindenhurst, laid on the ground face down at the center of a circle of protesters, repeatedly calling out “mama,” one of George Floyd's last words as Minneapolis Police Officer Derek Chauvin pinned his knee on Floyd’s neck for 8 minutes and 46 seconds.

CORRECTION: Bobby Smith said Southside Hospital officials had initially agreed to meet with him about the social media incident involving a hospital employee, but he said that meeting never happened. An earlier version of this story did not clearly identify the hospital.