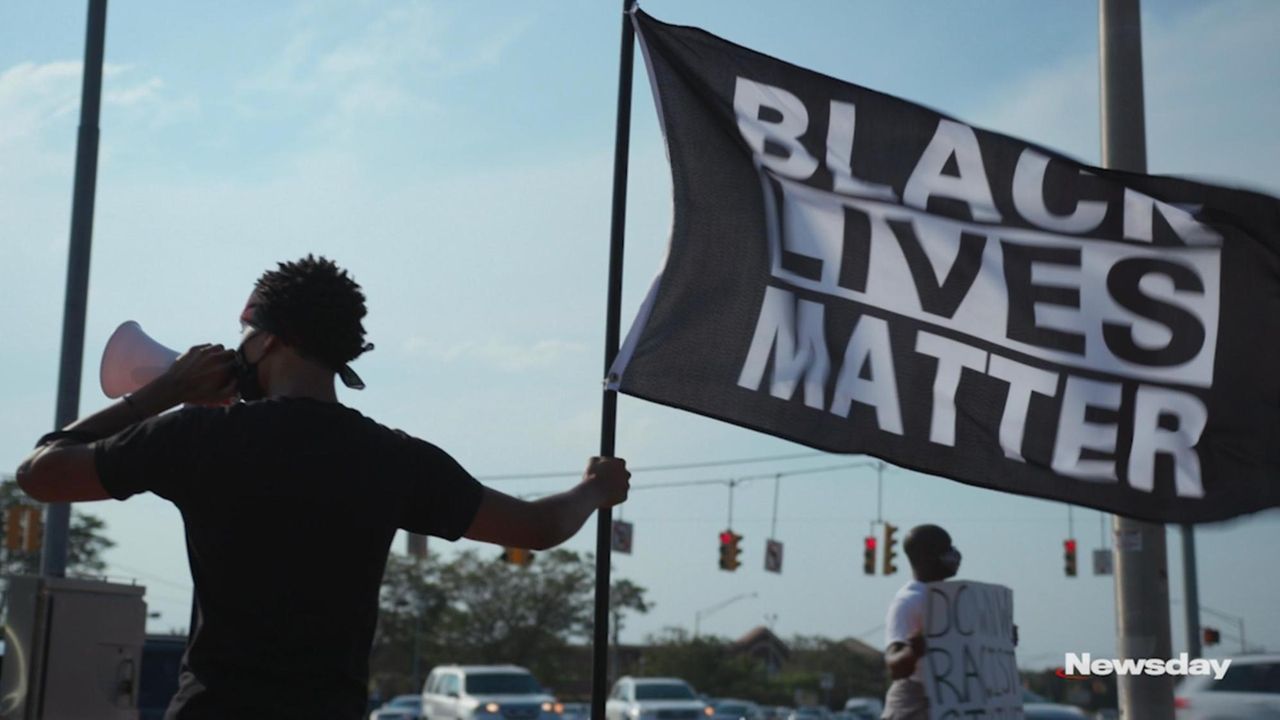 Protesters gathered on Saturday in Shirley to demand the removal of a statue of William Floyd. Credit: Kendall Rodriguez

Dozens of protesters returned to a busy Shirley intersection Saturday to demand the removal of a statue of William Floyd, a Declaration of Independence signer who owned enslaved people.

In front of the 7-foot-tall statue, protesters held up signs that said “William Floyd Must Fall” and chanted “No Justice No Peace,” to mostly approving honks and occasional gestures of disapproval from passing vehicles.

“We want this statue dismantled. We don’t want it moved. We don’t want it relocated,” said Monique Fitzgerald, 41, of Bellport, a protest organizer. “There’s no place here for it. The place for William Floyd is in the history books with a full synopsis of what he did as a person.”

Floyd's statue, which was placed at Montauk Highway and William Floyd Parkway in 2013, was fenced off Saturday. Protesters placed large posters of Black men and women who died in police shootings along the fences. Tables also were set up to register people to vote.

Inspector Matthew McCormick, commanding officer of Suffolk police's 7th Precinct, told organizers that police fenced off the statue to prevent people from climbing and possibly falling off it.

In a phone interview Saturday, Suffolk County Legis. Rudy Sunderman (R-Shirley) said he had met with organizers and welcomed open dialogues. But he reiterated that history could not be erased.

“Judging historical figures by modern standards has always and will always lead to clear recognition of abhorrent morality and lack of equality in the past, as it should,” he said. “But we learn from history.”

Sunderman noted Floyd risked his life and the lives of his family by signing the Declaration of Independence in pursuit of liberty.

“William Floyd is a point of enormous pride in our community. We neither ignore nor forget his flaws shared by many of the Founding Fathers. Instead, we readily acknowledge the period in which they lived and recognize them,” he said. “The William Floyd statue is not coming down.”

Protesters, however, said acknowledgment was not enough and criticized Sunderman's stance on rejecting removal of the statue.

“Even if you are not going to destroy it, it should not be a shutdown immediately [saying that] we won’t move it at all,” said Ezekiel Torres, 21, an organizer who graduated from William Floyd High School. “It should be a conversation. You are our elected official. We are the people you represent. You should be willing to compromise with us.”

Maille Bowerman, 18, who graduated this summer from the high school that bears Floyd’s name, also criticized the school system for failing to educate its students on Floyd’s complicated legacy.

“The school has to be better with teaching the real history of this neighborhood,” said Bowerman of Mastic Beach. “I grew up here so long not even knowing we have a Native American reservation so close to us and not knowing that he was a slave owner.”