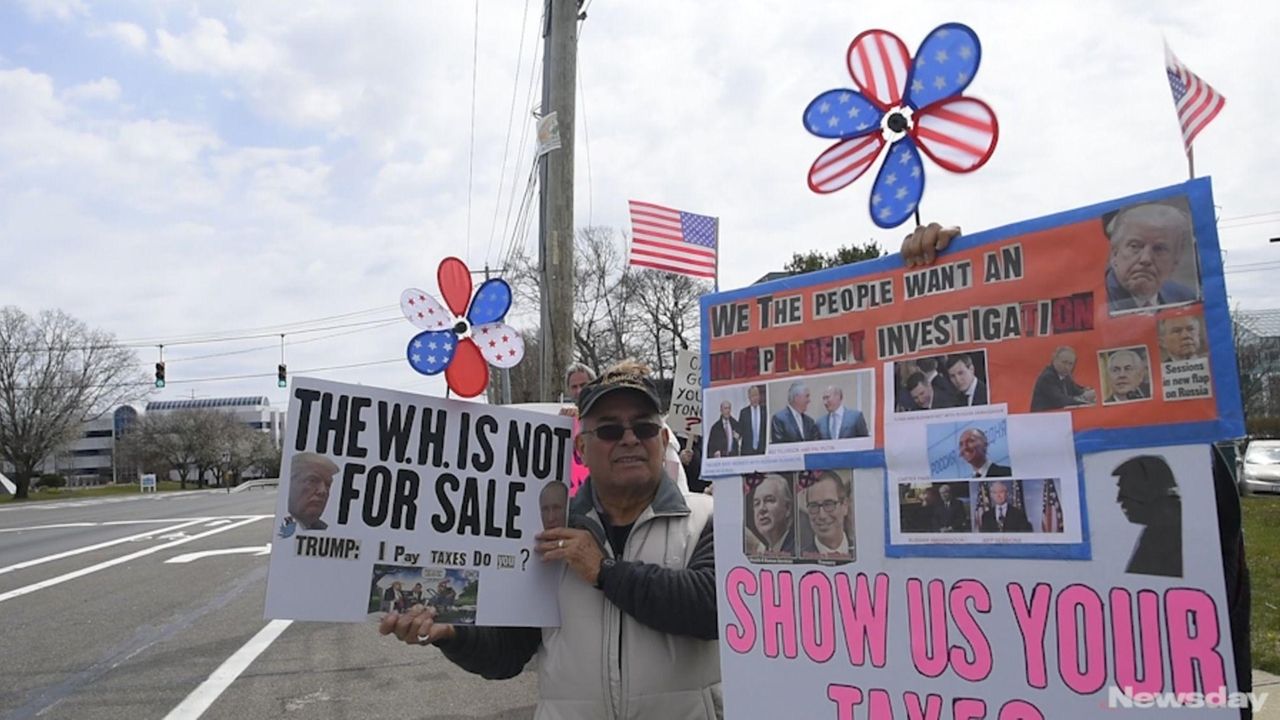 Demonstrators on Long Island and around the nation on Saturday demanded President Donald Trump prove his integrity by releasing his personal tax returns.

In front of the Internal Revenue Service building on Veterans Memorial Highway in Hauppauge, more than 200 people carried signs, some declaring “Do Not Pass Go: Show Your Tax Returns.”

“Americans are honest. We need an honest president,” said Bob Souto, of Nesconset, at the Hauppauge demonstration.

About 150 similar rallies were held in dozens of other cities on Saturday, the traditional April 15 deadline to file taxes.

Protesters cited various reasons for the release of Trump’s taxes, including potential conflicts of interest, possible foreign bank loans, and the perception, reinforced this week by the White House’s decision not to disclose its visitors’ logs, that the president has something to hide.

Presidents for the last four decades have released their tax returns, but are not required to do so. Trump has kept his tax returns private, initially saying it was because he was being audited, and later saying voters do not care.

One of the country’s biggest marches was planned in Washington, D.C., where demonstrators gathered in front of the Capitol before heading to the National Mall. In South Florida, President Donald Trump’s motorcade took a circuitous route back to Mar-A-Lago after he spent Saturday morning at his golf course, avoiding Tax Day protesters headed toward his Palm Beach estate.

Long Islanders also turned out in force at a Bethpage rally, the Long Island Progressive Coalition said in a tweet.

As passing motorists showed their support by honking and waving in Hauppauge, several protesters stressed the need for transparency and called on New York State to release Trump’s state returns.

Skepticism abounded among the Hauppauge demonstrators.

“Is he putting things in the tax code because it benefits him?” asked Thomas Muench, 78, of Lake Grove.

“We are becoming a banana republic, where all the power and wealth is held by a super-small elite.”

Karen Intorcia, 57, of Cutchogue, said taxpayers deserved to see Trump’s returns, adding that such secretiveness could imperil the future of her two grandchildren, Sorrel, 4, and Liam, 3, who accompanied her.

“This is their future too,” she said.

1:10
COVID-19 rate falls as eateries, bars to extend last calls
1:04
10 years ago, they were valedictorians. Where are they now?
1:56
Experts: Prepare dogs, cats to be home alone when you go back to work
Babylon Town weighs options to ease tax 'burden' from Oak Beach water project
LIRR paying $860G for feasibility study on battery-operated commuter trains
Atlantic Beach thrives on a sense of community
Didn’t find what you were looking for?