Three protesters were arrested Sunday during clashes at dueling demonstrations between pro-police and Black Lives Matter protesters in Lindenhurst, according to an email from the Suffolk County Police Department.

The arrested protesters — who in an interview Tuesday said they did nothing wrong and were singled out — were from the group Black White Brown United, and all were issued desk appearance tickets, according to the email, meaning they were released.

According to the Suffolk police, the arrests were precipitated by an “altercation” between the Black White Brown United group and pro-police demonstrators “and officers intervened.”

The three from the Black White Brown United group are Rosalia Garay, 29, of Stony Brook, who allegedly kicked an officer in the groin; Noah Milstein, 23, of Massapequa Park; and Lisa Strollo, 34, of Babylon. All three were charged with obstruction of governmental administration. Garay was charged with harassment, and Milstein and Strollo with resisting arrest. What Milstein and Strollo did to merit arrest wasn’t disclosed.

The three said in an interview Tuesday that their arrests were not justified. They described being set upon by a group of Suffolk police officers without basis or explanation, leaving Milstein and Strollo injured.

The Suffolk police did not respond to the allegations.

At the demonstrations where the three were arrested chants of “Blue Lives Matter” and “Black Lives Matter” clashed Sunday on opposite sides of a Lindenhurst street, where hundreds picketed, separated by police officers.

On the west side of that street — Sunrise Highway near the entrance to Babylon Town Hall — were about 250 pro-police demonstrators, holding signs: “Back the blue”; “Blue lives matter.”

On the east side were about 50 people affiliated with the Black Lives Matter movement, including signs that read “All lives won’t matter until Black lives matter” and “Am I next? #BLM.” 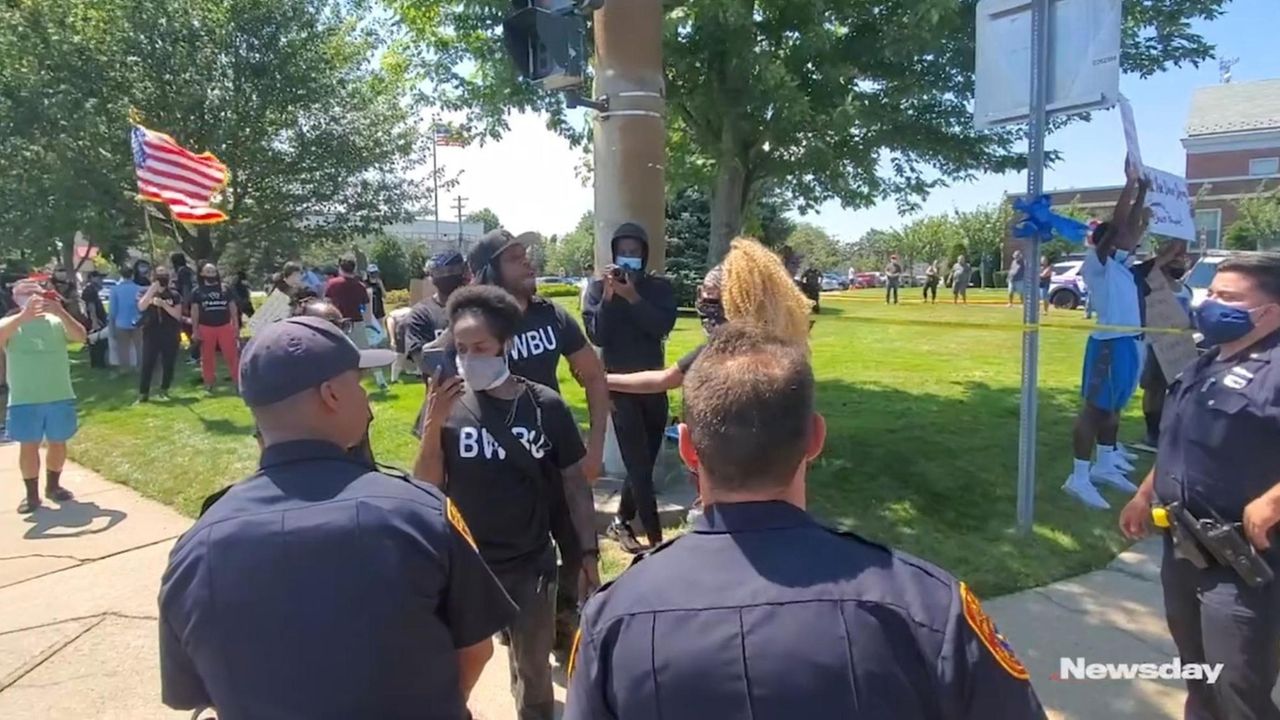 Later Sunday afternoon, in Levittown, 80 or 90 demonstrators gathered in a parking lot off Hempstead Turnpike in support of the Black Lives Matter movement.

“Guess what!? Racism still exists, even if it doesn’t affect you!” and “Silence is violence,” their signs read.

Erik Chevez of the Levittown Coalition for Change said, “There’s just deep seated roots of racism prevalent in every establishment within Levittown.”

When the federal government authorized loans for construction of Levittown, America’s first modern suburb, the standards included a racial covenant in each house deed essentially stopping black people from living there, according to the book “The Color of Law: A Forgotten History of How Our Government Segregated America” by Richard Rothstein.

Chevez said of Sunday’s gathering: “For us, it’s really important just letting people of color in Levittown know that we hear — we hear their voices when they are saying, ‘I can’t breathe.’ We hear them when they’re talking about their experiences of racism within this town.”

Sunday’s demonstrations in Nassau and Suffolk counties are the latest around the country, some daily, in hundreds of localities, following the May 25 death of George Floyd, whose bystander-recorded arrest beneath the knee of a Minneapolis police officer catalyzed protests over how the police treat Black people, the proper role of policing, as well as other long-simmering issues.

Demonstrations continued Sunday in New York City as well, including one early in the evening into Manhattan across the Brooklyn Bridge. The group marched toward an encampment that has been active around the clock outside City Hall.

Children, teens rally for Black Lives Matter at LI protestsAbout two dozen parents and kids in Central Islip made crafts and held signs in a children's protest for Black Lives Matter, while more than 50 protesters, many of them teens, gathered outside Broadway Commons in Hicksville. More coverage: Derek Chauvin trial in the death of George FloydNewsday's complete coverage of George Floyd's death, the subsequent protests and the trial of former Officer Derek Chauvin. See latest photos of LI protests over George Floyd's death in MinneapolisProtests in communities across Long Island, including Glen Cove and Southampton, have occurred following the death of George Floyd in the custody of a Minneapolis police officer.