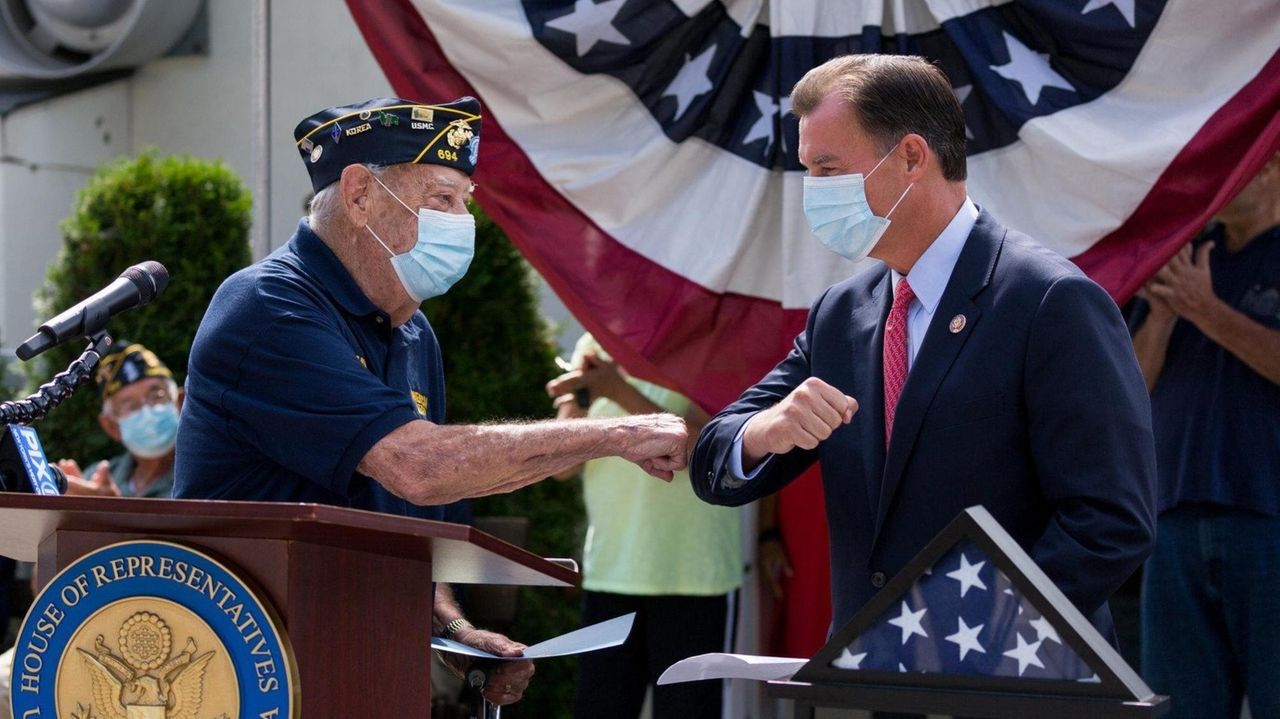 An East Northport man who served in the Marines, Anselm "Jerry" Cramer, suffered frostbite during the Korean War, but a change in rules disqualified him from being eligible for a medal. On Thursday, a Jerry Cramer Day celebration was held at the American Legion Post 694 in Northport to honor Cramer’s military contributions. Credit: Newsday / J. Conrad Williams Jr.; Photo Credit: Jerry Cramer, Dave Ellis, Newsday:Ana P. Gutierrez

East Northport resident Anselm "Jerry" Cramer believes he deserves a Purple Heart for frostbite injuries sustained during the Korean War — and so do his supporters, including Rep. Tom Suozzi.

In the meantime, a Jerry Cramer Day celebration was held Thursday at the American Legion Post 694 in Northport to honor Cramer’s military contributions. He was presented with a flag that was flown over the U.S. Capitol and a congressional citation recognizing his heroic service to the United States.

“I’m honored to have this ceremony today on my behalf,” said Cramer, 91, a retired electrician who worked in Brooklyn. “But I hope eventually I get the Purple Heart.”

Suozzi (D-Glen Cove) introduced a House bill on Aug. 7 for the president to award Cramer the Purple Heart, but acknowledged that will be a challenge.

“I think there’s a very good argument for him; certainly he’s worthy of the Purple Heart," Suozzi said at the celebration. "He was serving his country and seriously injured by external forces; frostbite is terrible.”

According to purpleheart.org, the medal is awarded to U.S. armed forces members who are wounded by an instrument of war in the hands of the enemy and posthumously to the next of kin in the name of those who are killed in action or die of wounds received in action.

In December 1950, as a member of the First Marine Division, Cramer sustained severe frostbite wounds to his hands and feet during the Battle of Chosin Reservoir in Jangjin, North Korea. He said temperatures registered at 25 degrees below zero, and for 10 days he and others survived in those conditions without shelter. He recuperated in a Japanese hospital and during that time he said he saw other military personnel receiving Purple Hearts for frostbite wounds.

Frostbite was disqualified as an eligible injury to receive the Purple Heart in March 1951 by military officials, who also said Marines awarded the medal for frostbite got it erroneously, Suozzi said.

Cramer has been denied a Purple Heart multiple times since 1964, with military officials citing the change in eligibility. Cramer's supporters argue that because his injuries were sustained in late 1950 and the rule was not changed until 1951, he should get the medal. Cramer said he was discharged from the military with a 40% disability.

“I vowed that I was going to do everything I could,” she said. “Reaching out to my friend Congressman Suozzi was a good move because I know that I handed this very important matter off to someone who was going to care about it as much as I do.”

Cramer said he hopes he gets the Purple Heart sooner rather than later.