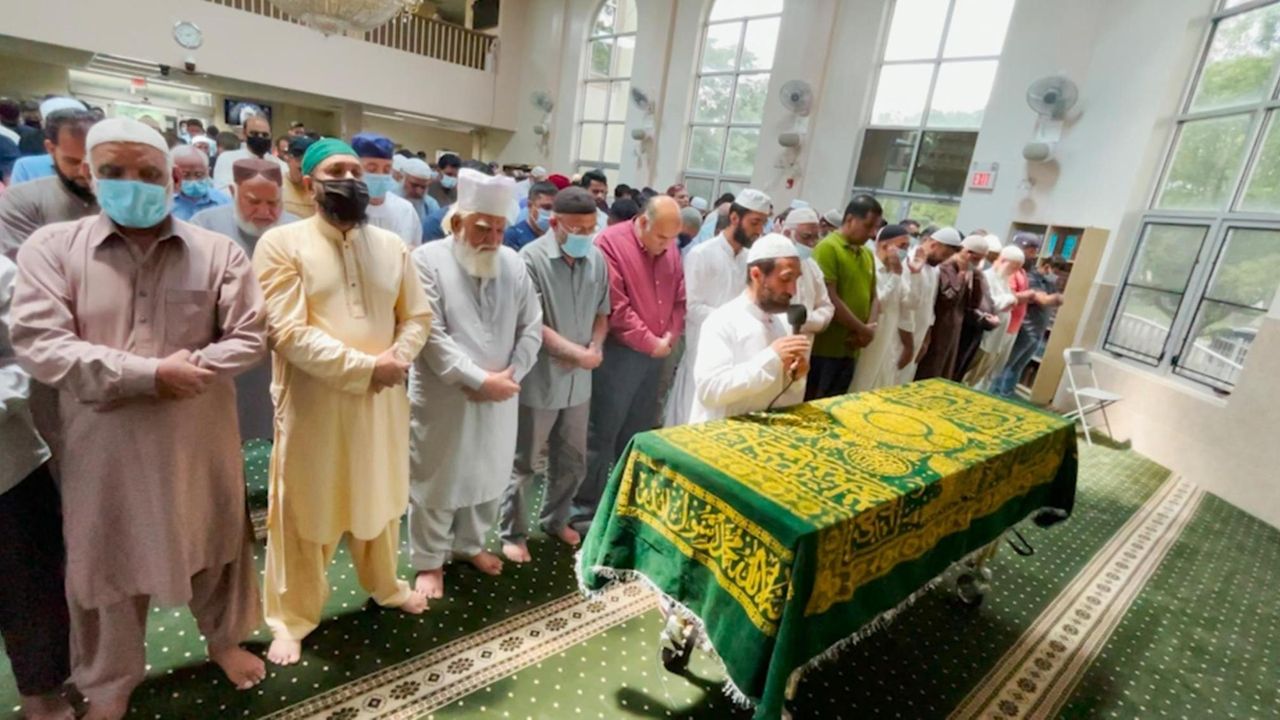 At the funeral for Farhan Zahid, friends and family remembered him as the kind of person willing to do anything for anyone. Zahid was one of five people killed in a head-on car crash in Quogue over the weekend. Newsday's Cecilia Dowd reports.  Credit: Howard Schnapp; James Carbone; Steve Pfost; Photo Credit: Zahid family

Kneeling at a Bay Shore funeral Wednesday, the family of an Uber driver killed with four others in a head-on collision in Quogue prayed for his soul. Elsewhere on Long Island, the lone survivor's loved ones kept vigil at her hospital bedside, praying for her recovery.

The families are of different faiths — the Uber driver, Farhan Zahid, 32, was Muslim; the survivor, Brianna M. Maglio, 22, is Roman Catholic — but each has turned to God in the face of unspeakable tragedy.

"The prayers are helping and working, so you may or may not believe in that, but that’s what we believe in," said Kurt Kiess, a Lutheran and the father of Ryan Kiess, 25, who was Maglio's boyfriend and one of Zahid's passengers who died.

On Saturday night, Zahid, a married Bay Shore father of three, was driving a Toyota Prius east on County Road 80 in Quogue when a Nissan Maxima driven by Justin B. Mendez, 22, of Shirley, crossed the center line at 11:15 p.m. and hit the vehicle head on, according to the village police department. Mendez, the police chief said Tuesday, was speeding at least 55 mph in a 40 mph zone. An officer had tried to pull him over moments before the crash, in which Mendez was killed.

Three passengers in the Uber were killed: Michael O. Farrell, 20; his brother, James P. Farrell, 25; and Kiess, all of Manhasset. Maglio, of Garden City, remains hospitalized in critical condition.

At Zahid's funeral, hundreds packed the Masjid Darul Quran mosque on Wednesday afternoon. His coffin, draped in a green and gold shroud inscribed with words from the Quran, was carried in by family members.

"This is the final prayer request to God that the person who left us be forgiven and ask he be granted the highest place in paradise," said Imam Muhammad Ajmal.

The coffin was led out of the mosque by Zahid’s father and one of Zahid's sons for burial at Washington Memorial Park in Mount Sinai.

In the mosque's lower level, where women and girls mourned separately from the men and boys, Zahid’s wife, Hifsa Ahmad, and the couple's daughter prayed and emerged to hug other women after the coffin went to the cemetery.

His father, Zahid Iqbal Qureshi, arrived Tuesday from Pakistan to bury the second youngest of his five sons.

"My son is very brave and religious," he said. "He was very down to earth and helped others and was volunteering. This is a very difficult time, but my son was a person of high integrity."

He said his other sons in Pakistan told him to be strong and not to mourn, but to accept the work of God. Farhan Zahid was set to return to Pakistan in October for his sister’s wedding.

Kurt Kiess said the family is postponing his son's funeral until Maglio's parents are able to attend.

"We have no plans until such time that we know that Brianna’s family can join us, so right now, we’re sitting vigil at Bri’s bedside," Kiess said.

He added: "I know it’s not conventionally done this way, but this is what’s good for my family right now. Without Bri’s parents, there’s no closure for Ryan, so we can’t do it. … We’re concentrating on Bri."

"We’re devastated, and we’ll never be the same, but we’re praying for Bri, and she’s a little better, and a little better," he said, "still in a coma, and that’s how it is."

At Zahid's funeral, his sister, Uzma Burhan of Canada, stood with two young children and watched as her brother's coffin was carried away.

"He took care of everyone. His family and everybody misses him," Burhan said. "I wish he could be here."

One of the mosque leaders, Dr. Hafiz Rehman, said the funeral prayer ties together the limits of life and death before returning to God either through tragedy or a natural death. The religion teaches to limit the celebration of heights in life to prepare for managing the sorrows of death, he said.

"It’s telling us what reality is: We are here a certain amount of time and the creator is God and he sets the time table," Rehman said. "We do not take anything from this world back from the word except our deeds. This happened tragically, but we still say from heart and ask God to forgive shortcomings."

Also in attendance was Ambassador Malik Nadeem Abid, secretary-general of the United Nations Human Rights Commission, who said: "We believe every human being will die, but he died at such a young age, and this was the first step of enjoying his life with three young kids. I went home and kissed my young daughter because anything can happen to anyone."

Quogue police: Officer tried to stop speeding motorist moments before crash that killed 5 A village police officer clocked Justin B. Mendez, 22, driving at least 55 mph in a 40 mph zone, put on flashing lights and attempted to pull him over just before the 11:15 p.m. crash, Quogue's police chief said. Grieving wife's dilemma: How to tell her children their dad is goneSince the head-on crash that killed her husband and four others, Hifsa Ahmad, of Bay Shore, said she's been peppered with questions from the couple's children about his whereabouts, and she is still searching for the right answer.  Speed probed as factor in head-on Quogue crash that killed 5Both drivers died, as well as three former Manhasset lacrosse players — two of them brothers — in the collision on Montauk Highway. A sixth person was critically injured.